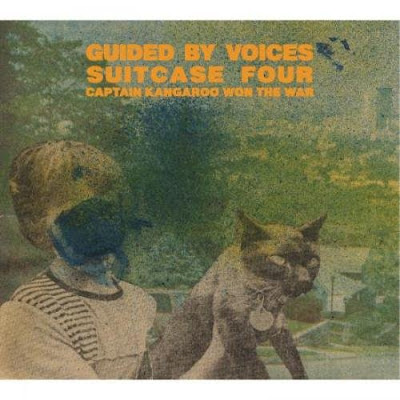 Strange Games- 3 Three chords repeated with a VERY young sounding Pollard at the helm. Uncle Bob, or Cousin Bob at this point in his vocal development, lays the Beatles' accent on pretty thick. A decent enough lost nugget of past history. Mid-tempo demo quality pop.

Thick and Thin- 4 Another 1983 from the great lost recordings of Pollard's band The Crowd. A nervy, pop coiled track full of subtle barbed hooks. Damn, these The Crowd songs really help make this box worth the price of admission. 2 minutes of pop bliss.

When 2 Hours Seem Like 5- 3 Full band version of what would later be recorded in an altered state of "Long as the Block is Black," off Tonics and Twisted Chasers. Again, a very early Pollard takes the lead with a band credited to former GBV alumni and a mysterious rhythm section. When was this recorded? What is it? Anyway, a fairly bleak, '80s new wavy tune with a strong vocal showing and a horrendous mix job.

Find a Wet Spot-1 Under a minute of dudes playing dude sounding riffs on acoustic guitars. People talk in the back, chuckle, a lighter is flicked a few times. At least it's under a minute.

I'm Just Doing My Job- 3 Releasing a million and half songs of varying quality? Well, if that's your job Mr. Pollard, you're getting a raise. Pensive repetitive guitar line with an introspective Pollard spilling his guts. Not too shabby.

Contemporary Man (He Is Our Age) [Demo]- 2 A guitar is annoyingly plucked as Pollard strains through a rough skeletal rendition of a soon to be song off Of Course You Are. The ending is much stronger, but what a long trip to get there.

Heels Tight- 1 Apparently this is an unused track from the Sunflower Logic recording of Clouds on the Polar Landscape EP. Yup, just about as unlistenable as anything off that EP.

The House Always Looks So Nice- 3 Brittle recording from a long time again, it seems. Pollard plays an electric guitar along to a rinky-dink drum machine. Apparently Mitch Mitchell lays down some bass that seems to be lost in the mix. A slow, murky pop tune that works on charm and mild hooks.

Amazed [Power of Suck Version]- 4 A long lost track which was recorded for the abandoned GBV album Power of Suck. Excellent "classic line-up" era Pollard '90s hooks are upfront over a guitar track that sounds as if it's coming out of one of those belt-loop compatible amps.

Disappearing Act- 3 The Crowd returns with more unearthed 1983 goodness. A slower burner than some of the others at first. Eventually, the track picks up steam, vocal melodies flying about. Somewhat promising but the whole thing feels somewhat clunky.

Rubber Man [Long Version]- 2 Originally released on the 1993 GBV EP Static Airplane Jive. Never really cared for the original, although some diehards would disagree. Here we get Pollard with a terribly strained voice strumming an acoustic version of the original, eventually pulling back the reins  and playing some pretty melodic chorus/bridge sections. Still, song's a mess.

James of Life- 1 This is the exact same track as found on Caron Whales' South EP released in 2008. Here, Pollard somehow makes it worse by adding a new, ridiculous voiceover/humming thing over this already worthless track.

The Jerking Clown- 3 Supposedly a song written by Pollard's first band, Anacrusis, this track's listed as being performed by Pollard, Mitch Mitchell, and Greg Demos. Not sure when this was recorded (sounds recent), but this track, coming in at just under a minute is an average slapped together mix of some post-punk bass, wistful guitar strums, and Pollard's obtuse lyrics.

Psycho All The Time- 2 Appears to be an older basement recording of the days of fucking around for EPs like Get Out of My Stations. In fact, this vibrato guitar + weird noise + plodding bass + senseless yelling would fit perfectly on that.

Throwing Down the Line- 3 A very sparse, haunting lo-fi version of what would eventually become the GBV classic "Postal Blowfish." During the verses, Pollard plays the iconic one note, whispering similar lyrics to the classic. The choruses are haunting strained vocals of longing. Nearly 5 minutes but let it roll. Somewhat chilling.

Proof- 1 Some of the newest batch of Pollard guitar to boombox demos, "Proof" is a sluggish, heavy strummer that leaves much to be desired in its bare state.

Third Grade Aviator- 3 Another one of the Nick Mitchell/Pollard collaborations recorded specifically (so it seems) to fill space on the Suitcase 4 set. Luckily, these guys actually tried to make these things listenable and have some fun. Streamlined rock, just a shade over a minute, with mild hooks to boot. Very GBV reunion era.

She Likes Tea Rats- 2 According to Gbvdb.com, bassist Jim Greer reported this was in improvisational jam recorded at Maxwell's in Hoboken, NJ. Apparently, the band ran out of songs that night and made this one up. A testament to GBV at the time, they really had that weepy-but-hopeful guitar pattern down to audio gold. For a bunch of made up garbage, it ain't half bad. Still, it's primarily a bunch of garbage from the height of GBV's powers.

Promo Brunette- 1 Another 2015 Pollard demo. Pollard repeats the title a bunch and strums some junky chords. Eventually, he incoherently mumbles like an cloudy-eyed uncle after an all-day BBQ. For reference only.

Just One Drop- 3 An early live version of what eventually morphed into the song "Office of Hearts" off Under the Bushes Under the Stars. All things considered, a strong early showing of one of the more unremarkable songs on UTBUTS.

Temporary Shutdown- 1 Two dudes wanking around on two instruments. One's a guitar. The other is drums. One guy playing is Robert Pollard. The other is Mitch Mitchell. My brain is falling out of my ear......

Skin High- 2 Nothing but piano bashing here at first. Sounds doom coated and hopeless. Suddenly, extremely distorted vocals soar in and Pollard backs himself with some extreme melodic screaming. Nothing to gloat over but of mild interest.

Your Cricket Is Rather Unique [Demo]- 3 The last of the bunch to appear as a demo to Pollard's 2016 solo LP. One of the more complete of the recent demos on the collection. Great chorus, jangled drool worthy guitar lead. Sounds like vintage Pollard, even in demo form.

Fame and Fortune- 3 After all these years, the first actual recording from Robert Pollard 1st band, Anacrusis FINALLY surfaces as track 99 on this 100 song collection. Recorded sometime between 1975 and '78.  Decent lo-fi production. The whole track reeks of the '70s, from the basslines to the swirling guitar parts to Pollard's vocal hook. Could pass as a Sabbath outtake, but, you know, played by a bunch of boys from Dayton, OH. Great to finally hear this.

High Treason- 3 Pollard plays a march pattern on his acoustic guitar. Sounds like it's about to be a throwaway, but Nick Mitchell synth orchestration comes in. Pollard changes vocal patterns and the whole thing is saved out of nowhere. A fitting, semi-grandeous, if not schlocky march to the end of a long line of preserved notes and bad ideas. Long live Suitcase!