Under the Bushes Under the Stars
(1996, Matador Records) 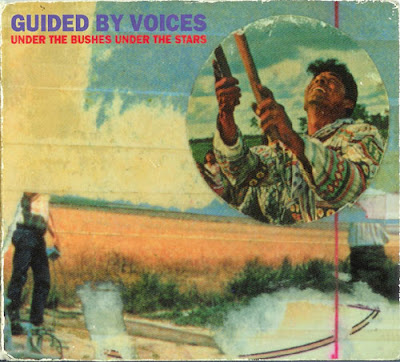 Initially recorded with celebrated engineer and musician in his own right, Steve Albini (Big Black, Shellac, Rapeman), much of the LP was said to be recorded at his famed Electrical Audio in Chicago (several tracks were recorded in other locations including Dayton's Cro-Mag Studios,Pollard's stomping ground). It is then said to have been taken back to Dayton, and remixed on 4-track to give it a grittier, lo-fi aesthetic the band had now become known for. Whatever the case, the LP is another strong outing, and a solid listen from start to finish.  Gone are the barrage of snippet tracks that had infested Alien Lanes. UTBUTS ushers in a mix of short, surrealist pop bursts, and fully formed, basement rockers that resonate deeply in the hearts of many a GBV fan.

This LP saw release on CD and LP, with the LP containing 2 discs.  The 2nd record in the LP set contains 6 tracks.

Man Called Aerodynamics- 5  Explosive, squealing, and ultimately bombastic. Amazingly upward moving opener with hazy, surreal projected vocals, and gigantic hooks.  Case study in how to blow the lid off an LP right off the bat.

Rhine Jive Click- 3 Cowbell, oohs and ahhs,  and “Crowded gymnasiums.”  Simple, 4/4 strummed song that acts as a anchored bridge gap before that classic opening of…

Cut-Out Witch­-  5 One of the most unmistakable openings for any GBV song.  Uptempo, steady, attitude served without brutish force.  Sing along, shake a fist, don’t go outside all day.  Perfect soundtrack for all the above.

The Official Iron Man Rally Song- 5  An epic song that harks back to memories of endless summer days and regretful nostalgia. One of those soundtrack to a life songs. Excellent verses flow into even better choruses.

No Sky- 4 Fairly bare track, with irresistible Pollard bellowing of “COULD YOU KEEP A SECRET FROM ME?”.  Tough not to yell out at inappropriate times when song unexpectedly pops in one’s head.

Bright Paper Werewolves- 4  Beautiful hushed acoustic number that explodes into over the top dynamic section with some great lyrics. “Gold Heart Mountain Top…” part 2 if you will?

Lord of Overstock- 3  Mid-tempo heavy pop-rocker. A little flat, lacking the "big hook", or that dynamic jolt when compared to some of the gems on this album.


SIDE B:
Your Name is Wild- 5   Excellent uptempo, bright melodic punk- pop song.  One of the brightest gems to grace this era.

Ghost of a Different Dream-  4 Ultra-pop, high energy song with tremendous vocal hooks. If you find a bed, put this on and jump off it immediately.

Look at Them- 3 Big clamoring vocal hooks ensue while simple down beat guitar strums and surreal pulsating play out in the background.

The Perfect Life­- 1 Strange noises bleed into “The Perfect Life” as some boombox tape recorded piano is played. Ambient gap track, something GBV had not done up to now. Not really a song, but works well when considering the context of the entire LP listening experience.

Don’t Stop Now- 5  Originally an acoustic demo on King Shit and The Golden Boys compilation This version gets the fleshed out treatment of dynamics, cello intro, and unique guitar swirls in the bridge.  Still, this song remains quite intimate, nostalgic, and beautifully sad.

Office of Hearts- 3 The verse of this track has some awkward melodies. Song on a whole is also unremarkable through and through considering the trail of potent numbers and blazing pop melodies that have served as its predecessors.


2nd 12''
SIDE A:
Big Boring Wedding- 5  Slow burner with big rewards. Pollard allows the melodies to take their time, throwing huge repetitive hooks in after grandly haunting verses with some of the coolest lyrics in the GBV catalog.

Drag Days- 4 Similar sounding to “Your Name is Wild” but with repetitive guitar jangle. Happy seemingly carefree verses are followed by urgent choruses.


SIDE B:
Sheet Kickers- 3  Post-punk bass lead plodding with big choruses. A bit run-of-the mill, and lacks a great melody.

Redmen and Their Wives- 2  A staple of some live shows, but far too long and uninteresting. Slowly rolls out from trudging guitar strums to full-band drag with relaxed, unmemorable melodies. The high point is the sweet lazy lead guitar lick that closes the song.

Take to the Sky-  3 Pre-Bee Thousand EP sounding acoustic rambling track. Not much of note here. Toddles along on a shaky leg with some stream of conscious. Lo-fi in the mid-range.