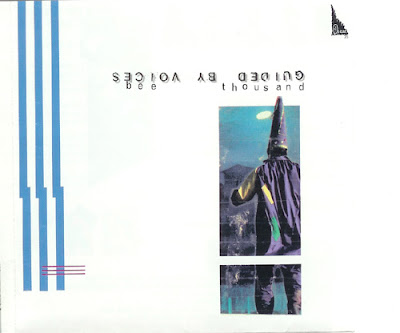 If you are even the most casual fan of indie/college/underground/whatever-the-label rock, or are intrigued by perusing any sort of obscure "top albums' lists, little explanation of Bee Thousand is necessary. This is especially true if you're a GBV/Pollard fan. It's probably how you became one in the first place. For those who've miraculously stumbled on this page untouched by any prior knowledge of the Pollard song cannon, the following is for you.

Released in 1994, Bee Thousand is the LP that officially introduced Guided By Voices into the vocabulary and record collections of countless '90s indie/punk/garage/alternative/college rock/brit-pop/lo-fi/whathaveyou fans and music hoarders. Bee Thousand is a seminal release in any sense of the term. The LP broke while Robert Pollard, 34 years old,  was teaching fourth grade math in Dayton, OH. Playing scrappy pop numbers with his drinking buddies was a full blown hobby, masking Pollard's seemingly delusional dreams of rock stardom. The LP blew up in popularity, propelling the band into the press and turning them into a full-time touring act. Most importantly, this LP opened the flood gates for the barrage of material that began to pour out of, not only Pollard, but guitarist Tobin Sprout and Mitch Mitchell for years to come.

Originally, the album was assembled using myriad of different songs, track listing orders, and even LP names from the era often referred to by fans as "the classic line-up" of GBV. The final product arrived to Scat Records in this near perfect 20 song format that lives on in the hearts of any who cared, and resonates deeply with those who took the trip down the seemingly endless rabbit-hole that is Guided By Voices and the force of Robert Pollard.

Songs cut from the sessions later appeared on the GBV compilation LP King Shit And The Golden Boys. A 3 LP set was released in 2004 as Bee Thousand:Director's Cut. Original acoustic jams featuring fragmented ideas from the LP later surfaced on Disc 4 (12 overall) of Suitcase 3 as well.

SIDE A:
Hardcore  UFO’s- 5 Another big basement style opening from classic era GBV. Should be suited for the stadium but we're given classic GBV one and done treatment from Pollard's Dayton, OH basement. We get none of the fat of the stadium, but all the fuzz and swirling hypnotic melodies from Pollard and Sprout in under 2 minutes. Also, great accidental guitar drop out, and reentry, forever documented onto whatever decrepit 4-track tape it was originally thrust upon. Get on your roof and watch the summer twilight.

Buzzards and Dreadful Crows- 5 High leg kicks abound. Jump off your bed and sing into a fucking comb if you have to. An edge of the stage, throaty, melodic shouter. Transistor pop-rock at its best. No matter where you are, find a window, roll it down, and begin shouting along to whoever will listen. Powerful, melodic crunch.

Tractor Rape Chain- 5 Pasted on acoustic strums, before kicking into the unmistakable hazy riff that glides this classic forward. This is why mix-tapes got made in the first place. From the late-summer-afternoon ready verses, to the mammoth chorus hook, to the surreal lyrics, simply one of the best GBV songs ever. Period.

The Gold Heart Mountaintop Queen Directory- 5  Bleak, ominous, strangely and powerfully beautiful; beyond cryptic. May cause euphoric confusion, drunken tears, bleak soul searching, and joyous sing-a-longs at the drop of a dime. Chills every time.

Hot Freaks- 4 A live staple, and fan favorite. Steady, sometimes fragile rock song with undeniably great reverb that allows the guitar to flourish. What I would imagine as a one-off became a beloved song among diehards and casuals alike. Strangely compelling, but not as bone shattering as the first four tracks on the LP. A bullet with my name on it awaits from some for only giving it a 4.

Yours to Keep-  4 Never has such bridge-the-gap throwaway songs remained so powerful, and oddly listenable as the ones from this era of GBV. What at first sounds like little more than an afterthought turns out to be a hushed,lyrically poetic exercise in haunting imagery, grimly delivered over sparse acoustic plucks. Great, chilling material that breaks into…

Echos Myron- 5  Great ‘60’s rock in the vein of early Hollies, with choral hooks big enough to snag a fucking shark. Shit, even the bridge is amazing. Also, one of the best basslines in GBV history, completely rounding out the song and standing as a template for many of the great ’60 inspired, melodic riffs on LPs to come.


SIDE B:
Gold Star for Robot Boy- 5 Ultra lo-fi, thin pop-rock. Melodically melancholy. Endless stream of lyrics that are surreal and definitive of the fun and slacker mindset of ‘90s . Starts out on shaky legs, seems to require a quick guitar tune up as the guitar riffs stutter like a jalopy, encompassing all the GBV charm and prolific spirit of the era. In any event, what a genius piece of songcraft it is.

Awful Bliss- 5 Acoustic Tobin Sprout penned and sung song. The Sprout formula is in full effect here. Another contemplative, inward song that sorrowfully buries your spirits one moment, and resurrects you in the next. Beautiful.

Big Fan of the Pig Pen- 5 “Sharper than most/Cut with exacto/Gone is all good/Ex post facto”!!!! Ughhh. So cool. Quick acoustic ditty that should be played as exit music every night when bars close. Pollard, unironically throws in over the top “ba da ba da….’s” which lead up to a swelling, bluesy, wonderful mess of a finale.

Queen of Cans and Jars- 5 Perhaps the most simplistic, and insanely catchy, guitar riff ever! Carefree in approach and execution. Wonderfully straightforward. Wake up to this song once a week to get your life back on track.

Her Psychology Today- 2 Mash up of several weird ideas that jump back and forth between various basement recordings. Dizzying and psychedelic. Almost too much fun for one track. A bit vomit inducing at first, but grows almost personally nostalgic as repeated listens ensue, and becomes essential to the Bee Thousand experience.

Kicker of Elves- 3 Acoustic song powered by wobbly bass drum stomps. Silly, surreal lyrics that wind up forming a charming, if not completely idiotic song. But at the end of the day, it's easily hummable and gets stuck in your brain. Damn you, Pollard.

Ester’s Day-  4 Song opens with a snippet from Pollard’s bizarre, but admittedly catchy  “At Odds with Dr. Genesis,” which later appeared in full on “King Shit and the Golden Boys” B-sides collection. It then morphs into a pensively haunting Tobin Sprout composition that’s one for the ages.

Demons Are Real- 4 Over squealing guitar feed back and stomping acoustic strums, Pollard bellows and wails about losing all his money to a 300 pound ghost. Yes. Yes. He does. At first glance, this almost sounds like no song at all, but I along with many others can be found screaming every word to this gem alone in the car when the time comes.

I Am a Scientist- 5 The rewarding sing-a-long anthem buried at the end of the beautiful Abbey Road styled B-side of this LP. Undeniably, classic guitar line holds this together. Perfect melodies. Great lyrics that push the surreal, but stay grounded. Little explanation needed here. Just go relisten to it already. You know the words.

You’re Not an Airplane- 4 33 second Tobin Sprout piano tune leads us out. The fact that this blink-or-you-miss-it somber song closes such a strong collection of compelling pop-rock, lo-fi basement rockers, absurdist acoustic numbers, and epic heartstring pullers is simply flooring.