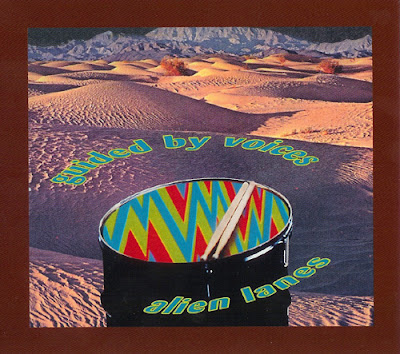 Upon its release, Alien Lanes was met with both outstanding and somewhat mixed reviews about the barrage of songs. Somewhat even more lo-fi and haphazard than its predecessor, this 28 song follow-up remains the favorite among fans and loyalists willing to fit between its comparable greatness to Bee Thousand.

Taken as individual tracks, it's not hard to imagine some of the initial confusion and eye-rolling the record may have caused among critics. However, Alien Lanes rewards the listener by consumption in its entirety. A notorious stickler for track order, especially at the time, Robert Pollard helped map out a dense, hidden pop-soundscape among the shoe-string budget fuzz and tape hiss. Alien Lanes is also infamous for its overhaul of GBV "snippet" tracks; seemingly unfinished ideas, and demo quality songs perfectly ordered and executed within the nooks and crannies of the LP. A lesser think-tank of a band might drop the ball on such an undertaking. However, GBV's "classic line-up" era earns its prodigious legacy here. Many of the songs on the LP act as surreal, avant, and short stop-gaps between brighter stand alone gems on the album. After serious listens through the record, some of these seemingly throw away snippet tracks can be missed when seeking out favorite tracks. My ratings may seem skewed to some. For example, a not so hot 18 second song is incredibly important to this album as a whole, but just remember I'm judging them on stand alone basis. But those few second long noodlings mean a hell of a lot when listening to the LP in full. Enjoy the 4-track majesty that is Alien Lanes.

SIDE A:
A Salty Salute- 5 “Disarm the Settlers!” The sing-a-long to end all sing-alongs. What can be described as one of the greatest pensive, openings in the world of indie rock, if not the rock pantheon in general.

Watch Me Jumpstart- 5 Buzz saw, hazy grandiose verses chainsaw into each other, with Pollard’s deadpan vocal delivery. Erupts into a sprawling melodic jack hammer of a chorus. Beautifully stoned mini-epic.

They’re Not Withces- 5 Acoustic track with sliding bass accents. Great camp-fire sing along feel, if you were at the strangest fucking campfire ever. So great.

As We Go Up, We Go Down- 4 Head-bobbingly breezy mid-’60s haze, with intertwined harmonies.  Light-hearted and catchy as a rusty hook.

(I Wanna Be A) Dumbcharger- 2 Odd, reverbed-blown short number that rides the thin rail of creepy and fairly unremarkable.

Game of Pricks- 5  !!!!!!  The definitive cream of the crop.  Perfectly simple, garage-pop, so perfectly compact, and arranged.

The Ugly Vision- 3  Dark acoustic picking, with bizarre downward spiraling twists and turns. Excellent piano, and weird sounds swoop in through each speaker. A fun little trip to take.

A Good Flying Bird-  5 Perfect, short song pulled out of the back pocket of Tobin Sprout. Multi-guitar strumming over perfect melody, with high-flying “YEAH!”s.

Pimple Zoo-  3 Oh by the way, this song is called "Pimple Zoo".... PIMPLE ZOO!!!! Threatening bashing layered over signature Pollard bellowing. One can easily melt from that acoustic strum in the middle.  Weird, and grand.

Big Chief Chinese Restaurant- 3 Home studio psychedelia, similar to “Cigarette Tricks.”  Perfectly weird, and equally spiraling. Playing of these tracks and will undoubtedly send them into the deep recesses of your brain.

Closer You Are- 5  Herman’s Hermits syrupy vocal melodies. AM pop ready, but dragged through the static grinder of the garage.  Undeniably hummable and perfect.

Auditorium- 4  Off-time, picked out guitar blips and jabs over chaotic, urgent harmonies and ranting. Finishes off with the lone, grand cries of “Auditorium.”  Dizzying and inspiring. Perfect bridge into the explosion of....

Motor Away- 5  4/6 heavy rock song with vocal melodies that carry and craft the guts of this classic song.  Another roll down the windows and howl at the passerby’s kind of song. Bedroom anthem’s 101. You know, to sing to. Not to "do it" to. Keep it clean.

SIDE B:
Hit- 3  Blink-or-you’ll miss it streaming vocal line that’s over before you know what hit you. Pun intended?

My Valuable Hunting Knife- 5  Ultra catchy melody sung over scratchy razor thin guitar lines.  Both forlorn and hopeful, “My Valuable Hunting Knife,” is hauntingly hooky classic.  Later, rerecorded for the 7’’ as a harder hitting stadium rocker, more apt to their live shows. That particular recording is equally great, but this one has lo-fi charm and eeriness abound.

Gold Hick-   3 Stream of lyrics that fall off the cliff into a canyon of instrumental twists and explosions.  Not much of a song to grasp onto in the traditional sense, but a strong bridge song with an oddly memorable vocal line.

King and Caroline- 4 Sprout penned tune with Pollard vocals over the hauntingly nostalgic music.  Like a beautiful bad dream, this track is a smokey haze of memory and melody that’s hard to stop mulling over.

Ex-Supermodel- 2 A Pollard and Sprout collaboration. Jangley guitar played over a looping snoring track. For me the highlight is the Pollard hook, “I write music for soundtracks now,” then repeat.  Other than that quick snippet, it's pretty forgettable.

Blimps Go 90-  5   Fiddle lead, steady pop-track, that’s airy and unabashedly catchy.  Possibly the definition for the term “pop-ditty.” Ugggh. Okay, that does positively nothing for how good this song is. Impossibly sad track cloaked brilliantly in pop-glory perfection.

Strawdogs-  4 Tobin Sprout handles all duties on this melodically pensive track. Great use of fuzz, heightening the hypnotic vocals.

Chicken Blows- 3 Slow, inward strung-out heart-string tugger with lofty harmonies and wavering vocals.  The first song to mope around to after waking up from a night of heavy drinking and bad decisions.  Try to avoid both of those things, kids.

Little Whirl- 3 Nasally, Sprout track that sounds like Power-pop lite.  Slightly disappointing considering the expectations of a Sprout track. One of those, it’s so syrupy catchy, that it’s not that catchy anymore type numbers. Mersey-beat pop-sap from the basement.

Always Crush Me- Same track released in 1994 on the split 7" w/ Belreve. You can check out the review there. Also, this song is a fucking 5!

Alright-  3 Big, reflective rock closer to cap off the swirling album of pop-snippets and psychedelic boom-box exploration. A catchy, mainly instrumental song to cap off the glorious madness that is Alien Lanes.