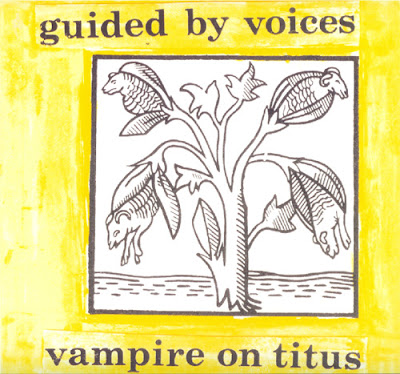 After the unprecedented buzz in the GBV universe following the release of Propller, Robert Pollard and Tobin Sprout decided not to call it quits and make a go of it in the burgeoning early '90s indie boom. Wasting no time, the two recorded arguably the most LO-FI LP of their discography; a completely off-the cuff, buried treasure with more levels of hiss and fuzz that you could possibly imagine. With the help of Bob's brother, Jim Pollard, Bob, and Tobin recorded the record on the fly, without the usual cast of Daytonites. Where Propeller delivered comparable main stream promise, and wore influences proudly on it's sleeve, Vampire On Titus threw all that to the curb, in order to get a record out to the now curious public.

Just prior to this LP, Scat Records also famously received the tracks to the Grand Hour EP, the first of the ambush of Guided by Voices EP tracks that hit the public over the next 3 to 4 years. Similarly, both that EP and Vampire On Titus are notorious in their recklessness, scrappy nature.


SIDE A:
“Wished I Was a Giant”- 5  Tobin Sprout and Pollard collaborative recording, with Pollard playing pounding slop drums ala “Exit Flagger.” Like that song, “Wished I was a Giant’” is a huge number. Slower, but profoundly epic in its sonic scope. Unfortunately, the “sonic” element is lost in the extreme lo-fi, but the core of this song is too great to fade.

#2 In the Model Home Series- 4 Sparse, moody duel guitar with cryptic repetitive lyrics.  Highly effective early, golden gems that seemed to pull themselves off so well during this period. Strung-out and harrowingly enjoyable.

Expecting Brainchild- 3 Classic voice over intro. This is a decent track with overkill buzzsaw guitars, and vocals sound like their sung through a megaphone. This is an example of “Vampire on Titus” stuff that’s perhaps too lo-fi for its own good.

Dusted- 4 Electric version of what would later be done better, and crisper, on acoustic guitar on the Fast Japanese Spin Cycle EP.  The song gets somewhat diluted in the lo-fi murk, but still a rewarding unsung classic following repeat reward listens.

Marches in Orange- 3 Another song that would later resurface as a great Fast Japanese Spin Cycle EP song, but with grunge-heavy back-up band. This particular version is a great meandering Pollard steam of consciousness verse with great melodies backed by a pump box organ. The Daniel Johnston version of what would later become a killer track.

Sot- 3 Laid back song with great leads and open-airy buzz guitars, but gets lost in the shuffle of more memorable songs of the time. Always a “Have I heard this before? Because it’s pretty cool” kind of song when it pops up on the album.

World of Fun-  2 Short acoustic track. Foreboding snippet but not much else.

Jar of Cardinals- 5 Plugged in electric played alone with Pollard on top of it. Perfect short song with surreal vocals. No band needed to back this glorious and glorified demo!


SIDE B:
Unstable Journey- 3 Like “#2...” this track is doused in too much lo-fi reverb for it’s own good. Everything starts to blend into an echoey hodgepodge and the real essence of the song is kind of lost. Crunchy and interesting but no real clincher part to this song. Aptly titled.

E-5- 1 Minor-chord jangle with ample Jim Pollard amp noise.  Tobin Sprout and Bob Pollard pop in and out with surreal vocals, but the song falls flat, and should be taken as one of those, “Holy shit. That was the greatest, or maybe worst thing I've heard,” kind of ways.

Cool Off Kid Kilowatt- 3 An equally weird, amp noise saturated lo-fi follow-up to “E-5,” but in this instance a ranting by Pollard is provided, which saves it and actually makes it intriguing.

Gleemer (The Deeds of Fertile Jim)- 4 Tobin Sprout takes the reign here on lead vocals, with electric guitars backing, sans percussion. It's your classic melancholy, but uplifting Sprout track. Sprout songs often have a way of feeling like getting a second chance in the morning.  This is a perfect example.

What About It?- 4 Electric guitar and some dabbling noises break through the tape hiss.  Sounds a bit like a sketch to something that could have been grand on a future album. But thankfully, the undeniable nostalgic feel to a nostalgia you can’t quit put your finger on is preserved.

Perhaps Now the Vultures-  2 Another song too rambled in slop and reverb for it’s own benefit.  Sounds like several instrumental and vocal parts piled on top of each other to form an idea that’s too hard to piece together for the listener. Perhaps a great song that never quite breaks through to find it's closure.


Non-Absorbing- 5 Childishly, devilishly good repetitive hook with foreboding breaks.  The drum hits are past the “charming” stage in this song. They’re necessary.  Such a perfect patchwork closer to a patchwork laden album.
Posted by Eric Truchan at 9:39 PM