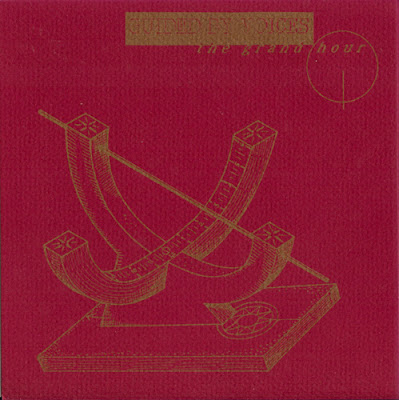 
Following the surprise success in the indie realm of Propeller, GBV was approached by indie label Scat Records to release some of the bands material. The label, hoping for a smattering of more basement pop, received Pollard apparently sent them this tape, which is essentially a grab bag of extremely lo-fi basement style recordings.  The Grand Hour is a spotty but interesting listen, and would set the standard for a slew of off-the-cuff EP material for the decade to come. Guided by Voices EPs would become a playground for the bizarre and spontaneous. The poor man's prog playground if you will.


SIDE A:
I’ll Get Over It- 3 DA drunken, rambling lo-fi mess of an acoustic basement recording. A complete wreck in 40 seconds. Hardly a song, but in the context of the EP and era overall it’s worth a peek, and to be fair it is peculiarly compelling.

Shocker in Gloomtown- 5  Maybe the best song ever to be constructed that would revolve around one single note. And it's a good note, which rings out the entire length of the song by the way. It jumps in and out of killer verses and short choruses. An unabashed GBV classic with good reason.

Alien Lanes- 1 Later the hit title to an LP, this song is built around a bass line paired with sloppy drums and an echo-chamber fueled vocal mess.  Okay, sure push the record button and talk about how Jesus saw the UFO.  Shit city, here we come.

SIDE B:
Off the Floor- 3 What will surely pique any GBV fanatic interest is the fact that this song starts with a 9 second snippet of “Hot Freaks” before melding into a Tobin Sprout acoustic number. Pollard transmissions ring in the back of this quick and pretty number. I wish it were a tad longer, because it’s pretty great.

Break Even-  3 Fast paced urgent rock riding hard on the drums along to gruff Pollard vocals. The acoustic bridge leading back into the pulsating verse is the best part of  the song.

Bee Thousand- 4 A completely idiotic ‘50s vocal melody as if sung by bored children spliced with muted Pollard vocals and basement off-kilter rock debauchery. Not much of a song in the traditional context, but the beautiful juxtaposition keeps me coming back to this track again and again.