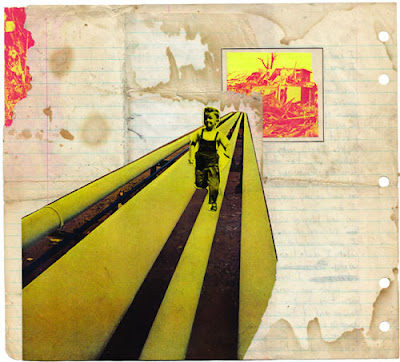 The 4th, and according to Pollard in a July 2013 issue of Magnet Magazine, the possible final GBV reunion LP. But as we've learned from the definition of "reunion" and the prolific output of Pollard, never say never (again). English Little League marked the 4th album in a hair under 15 months (and later proved not to be the final LP). Unlike its predecessor, The Bears For Lunch, the record gained added press, perhaps from its ingenious, prolific, and mildly daunting effort to release 5 separate singles from the album. Starting with the release of the Down By The Racetrack  EP in January 2013, GBV followed by releasing a 7'' every 2 weeks leading up the final release of English Little League in April 2013.

The hooks, which sometimes come effortlessly on past lesser GBV tracks, feel almost none existent on a majority of tracks here. For the most part, the LP is a slogged, gloomy foray into 2 to 4 minutes, a mostly a minute or two past their own good.   If The Bears For Lunch was the grand-pop cry of the reunion, Class Clown Spots a UFO the hodgepodge successful fun-run, this LP falls closer to the creative dirge of Let's Go Eat the Factory.  However, unlike that LP, English Little League insists on a packed forum (17 songs), with a rather GBV foreign, approach to overall song longevity. The LP contains no snippets, no minute-long acoustic pop gems, no noise-warbled psych splatters,which leads us to absolutely no half-cooked brilliant ideas. The weight of the 3 minute song drags the LP down, as does its inclusion of unfinished, sketch of ideas that have been stretched too far on one too many instances.

SIDE A:
Xeno Pariah- 5  Excellent opener to the 4th reunion LP. Distorted, jangled opening line leads into darkened pop, with a matter-of-fact guitar walk-down that's to die for. The melodic choral hook is a throw back to classic GBV. Yes, please!

Know Me As Heavy- 4 An odd, angular twisting pop journey. One of those GBV songs that ultimately hold a strong hook in it, but you gotta scrape for it. More akin to something Boston Spaceships might have on one of their LPs. Multi0sectioned, and ultimately satisfying

Islands (She Talks In Rainbows)- 5 Tobin Sprout travels back to the '60s, and brings us all back with him. This song is a symbol, and his the voice of a generation, 50 years too late.

Trashcan Full Of Nails- 2 This was released as the 3rd single off the LP. "Trashcan Full Of Nails" is a 3 and a half minute hit yourself over the head, mono-tone nursery rhyme versed song.  The chorus is breezy, expansive, and shows some promise. Otherwise, this song is like wadding through rehashed, sophomoric muck that fell inches short of the planing stage.

Send To Celeste- 4 Gloomy glory days glum track. With regret, and sadness, this slower song unwinds into triumphant moments of revelry in an otherwise gray backdrop. A tad slower than some decelerated GBV anthems, just as powerful.

The Quiet Game- 2 The most disappointing Tobin Sprout track since Let Go Eat The Factory in terms of songs from the reunion pool. Repetitive, sorta-psych track that sort of wades around in the abyss for way too long.

Sir Garlic Breath- 2 Oh Jesus Christ. This fucking title. Pollard piano track, the first released song recorded at his home studio (The Public Hi-Fi Balloon). Semi-improved track, with out-of-tune vocals over melodically melancholic instrumentation. So much more potential in this song than what actually came out.

Crybaby 4 Star Hotel- 4 A numbskull kind of marching intro that's too damn good to resist. The choruses are gladiator strong on this punchy, short, and unsettling tune. Great opener to Side B.

Biographer Seahorse- 4 Morose end-of-the-night track that's almost a perfect winner, but seems to suffer, not benefit from first-take, out-of-tune Pollard vocals. This song is beautifully slow, and has the potential to be a magnificent LP closer, but Pollard's performance really prevents this slow-burner from becoming a flat-out classic. More obviously, it is also not the closer.

Flunky Minnows- 5 The first 7" off the LP is a refreshing GBV '95-'97 throwback, blanketed in 'early 2000s GBV reminiscence. This song gets better and better with repeated listens, but is also fantastic on the first play. Sure to be an unsung classic.

Birds- 2 This song is as boring as its title. Oh man. Classic Earthquake Glue type stuff, but more straight-forward, and more straight-boring. Everything about this track is a flat-out snoozer.

The Sudden Death Of Epstein's Ways- 3 Tobin Spout tune that gets him back on track on this LP. Piano driven, Beatles-schmaltz ridden track, that has the promise to be so much more, but fades into a few shrugs. First off, what's with the repetition of "Jesus" in the verses? Christ! Pardon me, "Jesus!"

Reflections In A Metal Whistle- 2 Another home recorded Pollard track with Pollard behind the piano, banging away, mumbling some shit. Shit-tastic, minorly triumphant, orchestral ending saves this from being a total ship-wreck.

Taciturn Cave- 2 Slow, sludge nonsense reminiscent of "Nobel Insect" from earlier in LP. Pollard repeats "you heard me, you heard me, you heard me," until you wanna stab the jacket of the LP into your temple. The divergence into The Who, rock-opera territory is a welcome move, to save you from the madness. Ultimately, this goes nowhere, and sounds like a Let It Beard outtake.

A Burning Glass- 1 Song 3 from the home-studio of Pollard. More piano banging, out-of-tune singing (by the way, more of this was to come shortly, but in the form of The Sunflower Logic!). Sigh sigh sigh.

W/ Glass In Foot- 3 Semi-cock rocker, that's strong enough to resist embarrassing closer status. Repetitive, but not harrowing enough as some tracks on this album.  But still, why does this song close the LP? It's somewhat of a disappointing filler track to close out this muddled LP.