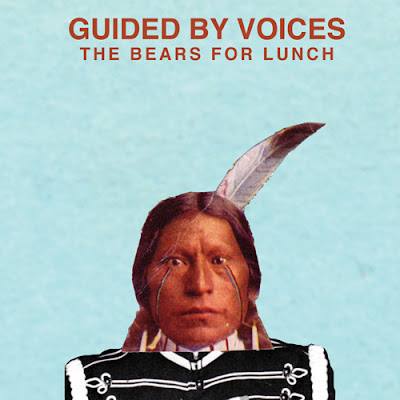 Hands down, the best, and brightest of the first 3 reunion LPs, GBV's The Bears For Lunch was a criminally underrated album from the word "go." Immediately detrimental to the cause, the 3rd LP in the GBV reunion hit the listening public with somewhat of a dull thud. After the wide-spread, unfairly heralded, but very understandable focus on the first reunion LP, Let's Go Eat The Factory, and a softer, but emphatic buzz over Class Clown Spots a UFO, non-fans and casual name-droppers seemed to have been less receptive to yet another LP. And this coming just 5 months and change after the Class Clown... LP.

The LP holds the distinction of being the most accessible, and best example of a return to form of past"hits" and fan-favorites of the classic era. Even when diverging away from the power-poppy lo-fi crunch, the LP holds plenty of twists and divergences to keep you on your toes and tug at your heartstrings. Don't let your copy of The Bears For Lunch collect dust. Put it on your turntable.

Additionally, for the history buff, the LP spawned 3 7'' singles with exclusive b-sides. Rather tough to pin-down really, as all three were released on the same day (10/29/12), and limited to 1,000 each.

SIDE A:
King Arthur The Red- 5 A gritty and driven mid-90s indie rocker.  Guitar power-chord propulsion, with wonderfully melodic vocal lines from Pollard.  If this came out in '96, this would without a doubt be a live staple, show starter or encore material.  Unfortunately, no one's heard this.

The Corners Are Glowing- 4 Subtly lush, Brian Jones-type Brit-pop. Laid-back, fay vocal melody over steady, beginner timekeeping, and psychedelic buildup and onward cerebral pop spiral.  If this came out in '95, everyone would be singing it's praise. However, hardly anyone's heard it.

Have A Jug-3  Minute long tune starts off sounding like a potential acoustic throw-away, until Pollard jumps in with a simple, early Beatles vocal line, and desperate vocal finish.  Whoa!  Saved it.

Hangover Child- 5 Is Cobra Verde back as the back-up band. Slow-building, drum heavy, expansive indie-jangle with a classic GBV melodic bass-line, and killer vocal hook. Released as the 2nd single off the LP.

Finger Gang- 1 Ok, this is a WHAT IS HAPPENING in the reverse sense. What kind of title is this?  Annoyingly repetitive guitar line, annoying vocal hook on this one-chord pounder. This song is just brutally brainless.

The Challenge Is Much More- 5 After a quick detour, GBV is back in great form here with this upbeat, insanely catchy '96-era GBV material.  Repetitive, melodic, melancholy guitar crunch.  As good, as it gets.

Waving At Airplanes- 5  Christ, Tobin Sprout!  How do you do it?  Acoustically driven, bittersweet-pop. Tobin Sprout has the ability to make you feel like a child, finding out a crushing life lesson for the first time.  Anyway, this is wholly beautifully constructed. Shit, even the bridge is amazing!

The Military School Dance Dismissal- 4 A drunken sing-along to end the night type tune. Piano, and muffled melodic Pollard plays a steady piano pounding to what feels like the outro to a '70s tv show, but it's incredibly sad, and touching. Between the title and feel, it's as if you want to know more.

SIDE B:
Skin To Skin Combat- 4  Tobin Sprout's original opens up Side-B. Razor-thin guitar tremolo track, with steady, handle-with-care drums. Sprout, delivers an incredibly strong, duel melodic vocal track that is barbed with tiny hooks and a child-like innocence. A tad on the long side for it's own good, but rather hypnotic as it plays on.  Tobin for President.

She Lives In An Airport- 5 A dead-eyed, vocal delivery over single, downer verses that build-up slowly into an excellent chorus, or second part, that is mix of about every great '90s GBV song ever into one.

Tree Fly Jet- 1 Total left-over track, after a slew of amazing cuts. Sounds like more effort was put into actually etching it into wax at the plant than writing this samey trash pit. Nearly 3 minutes of the same guitar line, few vocals, and tribal drums. Has Acid Ranch reformed?

Waking Up The Stars- 5  Hello?  The Beatles? Are you there? Specifically you Paul? Yes, is that you?  Okay, good and bad news. You want the bad news first? You've been replaced. Good news? It's by Tobin Sprout. Oh, hello Tobin, didn't see you walk in there. Good news or bad first? Okay. Good news is, you're the new Beatles. Bad news? Only the GBV nuts will probably ever hear this beautifully, lush acoustic lullaby that goes for the gut.

Up Instead Of Running- 3  Hmmm, that "sha-la-la, and sha-la-lee" vocal line is pretty dumb. Come to think of it, this song is kind of dumb all around. But it's got that classic GBV, often-Pollard guitar chug along to make it worth a spin, but on the filler side of things.

Smoggy Boy- 3 Thirty-five second track. Electric guitar, with The Who blasts. Warbled, cluttered affair that's over before it starts. Would've fit great as a snippet on an old LP, but feels a little forced here. Still, a fun droplet of a hammering song.

Amorphous Sunrise- 2 Nervous, declarative track with annoying Pollard vocal loop, and meandering guitar solos over the stomping, psych track. Moody for sure, but nothing to write home about.

You Can Fly Anything Right- 5 This feels lifted from about a hundred old, beautifully plucked GBV songs of the past, but who gives a shit? Pollard takes his turn at upstaging Sprout in the melancholy, innocently saddening song department. A wonderful Pollard pop-ballad, with a great lo-fi blanket to it.

Everywhere Is Miles From Everywhere- 4 The third and final single off the LP, this one's a breezy guitar jangle piece full of pounding, slightly progged, intervals.The song is almost a new classic. A strong closer for an LP worth repeating and sharing among those who many have blown off the third reunion LP.