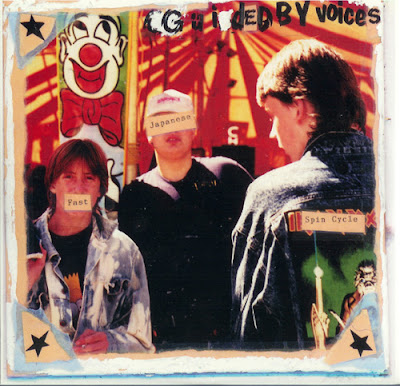 8 more tracks from the classic lineup of GBV, recorded during the classic "hit the four-track record button and let's do this!" period.  Released just before Bee Thousand, this EP was released on both 7'' and CD on Engine Records, and was reissued on CD in 2003 by aforementioned label.   The EP includes two redone cuts from Vampire on Titus.

SIDE A:
3rd World Birdwatching- 4 Later in his career, Pollard, arguably mucked up the legacy of output quality by releasing songs of this nature. Such was made evident over 3 volumes of his Suitcase collections. However, this 40 second EP opener stands as a testament to the times, just hitting the nail on the head. Weird, off-the-cuff, fun, but maintaining a healthy level of ominous. Near perfect GBV.

My Impression Now- 5 Roll down your windows.  It’s now summertime and “My Impression Now” should be on every radio station in America, but sadly, this never happened. Uptempo, great melody with spot on lyrics. Raw and inspired.

Volcano Divers- 3 Dark, acoustically plucked song with reverberating echos, and slanted solos dropping in. Sounds like Velvet Underground outtake, but one worth hearing.

Snowman- 3 Acoustic strummer, short and weird. Almost kind of perfect, though. Not exactly memorable, but somewhat fresh again upon revisiting.

SIDE B:
Indian Fables- 4  A 30 second acoustic, lo-fi number with a great melody. Cool cryptic lyrics reminiscing about some crazy nonsense in Pollard’s head.

Marches in Orange [Different Version]- 4 Redone version from the track off Vampire on Titus. This version is the “electric” band version, and not nearly as eerie. This time around it’s a pounding garage rocker.

Dusted [Different Version]- 5 Another rerecording of a Vampire on Titus track. Unlike “Marches...,” this rerecording drops the band, and puts Pollard and an electric guitar in focus for a much crisper lo-fi format. Without the band, this version is preferable.

The Crying Cooks- 5 Electric guitar, vocals, and toms hold this simple, yet insanely charming and catchy tune together. Excellent song.