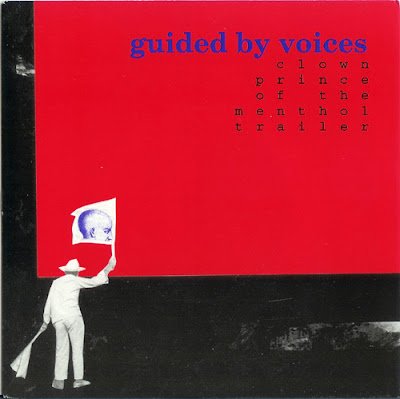 This EP saw the light of day in early '94 on the United Kingdom's Domino Records.  Still in its infancy, Domino Records would go onto become somewhat of an indie powerhouse in the years to come.  As far as Early '90s GBV EP's go, this might be the most shambled of the bunch.  The entire thing sounds like the drum set is falling apart, and songs were recorded the second time through, if that!  Some songs remain a corner stone of the cannon, such as "Matter Eater Lad" and "Pink Gun." The EP was later reissued on CD only in '98 from Recordhead Records.

SIDE A:
Matter Eater Lad-  4 Complete alcohol fueled, off-time 3 chord jam with a straightforward vocal hook. Lo-fi charm carries the track. Active listener is required to fill in the blanks themselves between the dropped notes and rhythm. The pop is in here, and it's pretty infectious. Repeated listens make this one somewhat of a classic.

Broadcaster House- 2 Putting too much thought into this track may cause symptoms of inebriation. Yeesh. But not the dregs.

Pink Gun-  2 Awesome simple guitar riff. BUT,the rest of the track doesn’t quite sink in or deliver.  Before you can process it, it’s over. Short, shitty, choppy, and later revisited by "professional line-up" GBV in the 2000s for some reason.

Scalping the Guru-  1 “Groovy Baby.”  That’s all you really need to know about this repetitive, noisy throw-away.  And by that, you need to know nothing about this track. Also, the song's title was once used as a working title for Alien Lanes.

Johnny Appleseed- 5 Acoustic, strange-pop track with vocals sounding like they were pumped through a phone receiver. A secret, lyrical message whispered in over a guitar track no one besides you was supposed to hear.  Private, and awesome.