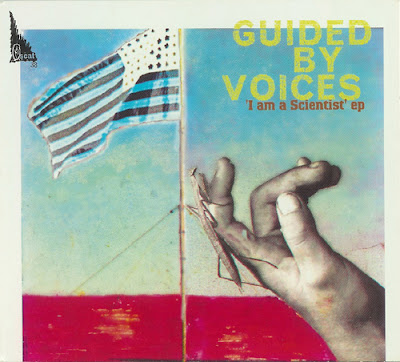 
Released several months after the landmark LP Bee Thousand, the I Am A Scientist EP is essentially the single for the classic track of same name, plus 3 exclusive tracks.  However, the "I Am A Scientist" version here is recorded as a  more radio friendly version  in comparison to the LP's take.  This EP was released on vinyl and CD.  This was later included in the 3 LP box-set for the Bee Thousand: Director's Cut, sans this 7'' recording of "I Am A Scientist."

SIDE A:
I Am A Scientist [7'' version]- 5  Great song gets an aural face lift, sonically improved and rerecorded. Fuller, heavier, and this is particularly true once the second verse kicks in.  Still fantastic, but not preferable to the Bee Thousand version.


SIDE B:
Do the Earth- 5 Fast tempo, garage rocker with great lyrics and a mysterious bridge.  The words interconnect so well with the garage riffage and steady drums that the song can't help but reek of cool. Do the fucking earth!

Planet’s Own Brand-  3 Out of tune guitar jangle with stuttered melodies never really delivers. The idea is clearly there, but not much execution unfolds on this choppy one minute track. Does contain the lyric, “Under the Bushes, Under the Stars.”  Trivia fact!
Posted by Eric Truchan at 3:23 PM