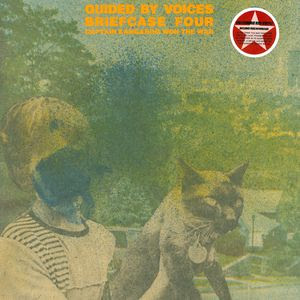 With every Suitcase release comes the highly collectable Briefcase compendium piece from Pollard and company. This, the 4th Briefcase to be added to the cannon, is the 3rd to contain exclusive tracks not found on the latest box-sets. In the scheme of the previous Briefcase LPs, this takes the cake, containing the HIGHEST number of exclusive tracks to date; 3 whole songs! Count 'em.... 3!!! It should be noted, I use the word "songs" fairly liberally. However, if you're in it to win it with Pollard, you'll take ever little piece you can get your hands on.

What's posted are the 3 exclusive songs on Briefcase 4. All other tracks are reviewed in the Suitcase 4 entries.

Finally, The 4 installment in the Briefcase series was released on pinkish, or as the cover sticker says, Commie Red vinyl. The release is limited to 1,500 copies worldwide.

Collider X-1 More tremolo guitar stuff pinging about as another guitar of sorts enters the mix, swelling, swelling, grinding, buzzing. What sounds like a distorted piano or modulated voice comes in the background. Total no-fi recorded noise. Song as a whole stinks to high heaven but sometimes I wish Pollard would put out a full, unapologetic noise collage LP that sounds just like this.

Eyes Re-Load- 3 Finally, a full band performance appears on these exclusive Briefcase tracks. Sounds much newer, based on Pollards vocals and production. Jumpy verses with spoken word transitions before hitting a pretty decent chorus. Overall, this is pretty short and sweet tune buried in some of the obscurest regions in his catalog.