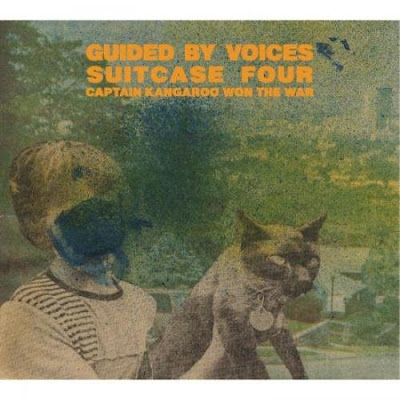 Bellboy Stomp- 3 Mitch Mitchell plays a two-note repetitious line while Pollard adds some flourishing guitar parts over it. Kevin Fennell stomps away on the drums. Basically, this 3 minute opener is only interesting for the fact it's an early sketch of what would become the song "He Rises! Our Union Bellboy" off Class Clown Spots a UFO.

Linda's Lottery- 5 Perhaps the best song of the Suitcase 4 collection originally recorded by Pollard's pre-GBV band, The Crowd. Droning infectious vocals create a simplistic, hypnotic hook that's hummable for days. The music is nothing to gloat over, and the verses are as wobbly as a matchstick house during a moderate wind storm, but it all works in the end.

Of Course You Are [Demo]- 3 Would I be remiss to mention this is a demo from Pollard's 2016 solo LP Of Course You Are? Of course I wouldn't. I am the informer of things. One of the clearer demos on here. Downer verses with an added on second part, pointing toward sing-to-the-sky vocals of hope and desperation. Goes on a while, but shows some promise.

City W/ Fear- 2 Droning noises, monotonous guitar plucks, some bass in there too. Pollard talks as if coming out of another dimension. Very unnerving, and of some interest. For fans of Howling Wolf Orchestra and Acid Ranch.

She Doesn't Know Why- 1 This may be the dumbest song ever released by Pollard. Sings some out of tune improvised shit while someone plays one note on a guitar, all while the guitar string is being tightened and loosened.

(I Been) Pigeon Tripping- 1 Bogus noises for just under a minute. Complete garbage during a sanitation strike.

Fall All Over Yourself- 3 Finally, after 4 of the weakest tracks on Suitcase 4 (as in practically unlistenable), we arrive at a genuine pop tune. Upbeat, pop rocker recorded with Ricked Wicky's Nick Mitchell. Seems to be one recorded for the sheer purpose of filling up the box-set with new stuff. At a shade over a minute, this is a welcome addition.

Quality of Armor [Original Version]- 3 Yes, you've read it correctly GBV fanatics. Exposed! We have the original demo off the Vampire on Titus guitar driven, Beatlesesque harmonized classic. Unfortunately, this pales heavily due to the insufferable audio quality (mind you, this is GBV we're talking about here). It's great to have this historical nugget, and there's something beautiful listening to the clamor buried beneath the dissonant muck and maddening upfront bass track.

Teeth Flashlight (demo)- 2 Often I annotate things on this website, as does GBVDB.com when it comes to other versions of songs. Let it be noted, Pollard himself put the word "(demo)" in the title. What this is a demo for? Who knows. All I do know, is it's a rather lifeless acoustic track. The guitar riff is a snooze, the vocal performance is flat and all over the place. Nahhh.

Lest Make Out- 1 No, that's not a typo. "Lest Make Out," features lawyer/bassist Greg Demos on the drums plays a kick/hi-hat combo. Pollard plays dissonant guitar strums and bends strings. No.

Busy Bee- 2 33 seconds of Pollard playing an acoustic guitar. Alright, sure. We'd be glad to hear it.

Why Do You Stare Into the Sea?- 2 Credited as a Sunflower Logic track. As the credits confirm, it does contain the whole Sunflower Logic band (the Pollard brothers, Demos, and Joe Patterson). But like the Sunflower Logic EP, this is an exercise in brain numbing. Nearly 4 minutes of fucking around with a semi decent fuzzed out bass and guitar interplay that almost comes together by the end.

Heartbeat- 4 Wow! A real lost song here. Featuring TOBIN SPROUT. Apparently, this is an early GBV cover of Tobin's '80s band, fig. 4. Originally meant to be included on the aborted GBV LP Back to Saturn X, it finally sees the light of day. A raucous, catchy punk backed tune with some of the busiest bass playing in the catalog. Great stuff from an early session.

Near As Not Late- 1 Okay, back to the bullshit. A possible lost Acid Ranch track filled with shitty drum machine, horrid guitar playing, Pollard yelping.

Carnal Limousine- 1 Horrid Pollard performance as he lays down a paper thin guitar part and sings a grating repeating line on some hum filled piece of tape. Disc 15, you're killing us!

Doctor Boyfriend- 4 Collaboration between Pollard and Nick Mitchell. Rather hi-fi sounding. Pop-tastic demo, Mitchell playing a rough drum and organ part. Pollard's vocal hooks register some familiarity. Wish I knew when this was recorded, and what for? Quality stuff here.

Spiraling Epsilon- 3 Acoustic demo of sorts. Skeletal sketch, featuring a rather strong Pollard performance over its one minute of tape.

Ugly Day of Rain and Soccer- 4 A brittle, VERY early sounding Pollard demo. A heartbreaking feeling permeates throughout. Singer-songwriter stuff, with a haunting melody buried underneath. Tape sounds extremely brittle, even cuts out a a second mid-song.

Yank For the Rooties- 1 Jim Pollard and Uncle Bob both play guitars for about a minute and a half. Sounds like they're trying to emulate some arena rock song. Not terrible but we certainly don't need to hear it. The best part is the clapping at the end.

Glad Girls [Early Version]- 1 A 40 second HORRID early version (if you can even call it a version). Pinging snare drum with guitar fuzz. This version is flat-out baffling. Go home 4-track, you're drunk.

(If You've Got a Rocket) I've Got a Ride- 3 Great lead guitar line and full of promising vocal hooks. Another demo for Of Course You Are. Promises to be the possible HIT of the LP? Possibly.

Frog Baby Axe Murderer- 1 Nearly 5 minutes of fucking around. Pollard plays a fairly cool guitar crunch riff over and over while Randy Campbell plays a shaky beginner's drum beat. The tape is then played backwards. Getting through the whole track is an exercise in patience.