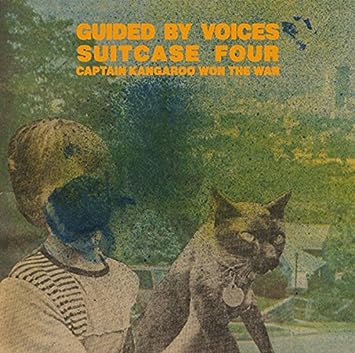 Lockets of the Empress- 4 An older, fairly poorly recorded tune I'd register as a mid-80s tune. You know why? Because in GBV nerd-land, this is a long lost reported track from the unreleased 1984 GBV LP Pissing in the Canal. A jangled, tom-roll filled affair, this is Pollard light; part new-wave, part mild-of the road melody. More intriguing for it's historical value than anything else.

The New Coze- 3 Short and strange trip with brother Jim Pollard and GBV faithful Mitch Mitchell. Monotonous guitar strums backed by drum stomp and upfront existential Pollard lyrics. So much of nothing, it's kind of great in its own horridness.

Our Little Secret- 3 A muddled, but blistering garage rager complete with buried killer hooks. Pollard sounds like he's screaming himself sick as Mitch Mitchell and Kevin Fennell pound away. Pretty cool diamond in the ruff.

I Can Never Let You Win- 2 Another Pollard acoustic demo for his forthcoming LP. Nothing of note going on here. Does it have promise? Possibly. Here it's just some chords strummed and some humming lost in the background. Stay tuned folks!

Hey You Know Me- 2 A live track recorded during the GBV reunion as Pollard and Mitchell declare that each one in the band "rocks" and that Philly "rocks." Greg Demos holds down the pulse with his bass and striped rock pants. 100% fun, but that's about it. Thanks for this glimpse into a good time had on stage.

Ode to J.D.- 3 An early acoustic Pollard song. An inside glimpse of a pure, simplistic melody being worked out by a young Pollard. Even if the lyrics are cheese, this is a pretty non-offensive voyeur session into the past. And, shit, that melody's fairly solid.

I Am Decided [Alternate Mix]- 5 Another version (or simply, a different mix) of one of the greatest GBV songs never properly released. '90s indie fans will remember this as reaching its commercial zenith after Kim Deal and The Amps covered it. Since then, drips and drabs of these demos keep appearing on Suitcase box sets. Great lo-fi crunch, the guitar sounds like a blanket of warm fuzz. A goddamn classic. Beautiful version.

Over and Over Again- 2 Pollard plays a sappy nostalgic little strumming pattern on a guitar stuck in vibrato mode. Think early Lou Barlow Sentridoh recordings in terms of quality. The melodic line is eerily affecting. Cold yet hopeful sketch complete with shitty improvised, prog-farting-around that never seems to end.

Excellent Extensions- 3 New track recorded with Ricked Wicky's Nick Mitchell. Sounds a lot like something from the early 2000's run of GBV. Synth heavy in its  ambience, stiff guitar strums, and meandering drums. Pollard repeated "excellent extensions" a bunch in an ethereal tone. Corny, flat, but somewhat familiar in a good way.

Good To Look- 5 WOW! Again, where is this stuff coming from. Here, we are presented with he original version of "Queens of Cans and Jars" later off Bee Thousand. The song is somewhat drastically different in parts. However, this version is grade-A poptastic, suburban indie goodness, neatly packaged and better recorded. Great to hear this one unearthed too!

Slave Boss Cranberry- 1 Sounds like a live recording. Based on the personnel, this was a late period GBV recording featuring Doug Gillard, Kevin March, etc. An on-the-spot soundcheck perhaps, Pollard singing some nonsense. No other band would release this, but here you have it.

Slow Dirty Water- 3 This is the 3rd version of "Dirty Water" to see release. Originally appearing on Earthquake Glue, the song was completely shat upon by Todd Tobias' outlandish production. On Edison's Demos, I still found this song to be a snooze. Here, something about hearing this familiar, slowly melody in between sparse guitar strums... I might be feeling a change of heart. I'll take it.

The Garden Goes- 1 Acoustic Pollard is back. It's Suitcase, so what else is new. There might be some real words in there, but mostly uninspired mumbling under uninspired strumming.

Save My Life- 4 Mid-fi, LIVE 80's Pollard fronted band featuring Mitch Mitchell and Peyton Eric (infrequent GBV collaborator). What can be described as gloomy, western post-punk. Heavy tom rolls with bouncing, giddy-up guitar riff and one epic downer of a chorus. A hidden bright spot bigger than a Great Lake.

Clean It Up- 2 A different version of the song "Tractor Rape Chain (Clean It Up)" which in turn is an early version of "Tractor Rape Chain" off Bee Thousand. You all following this shit...? What a rabbit hole of demos on this Suitcase, I tell ya. Anyway, similar version to the Magnet Magazine 7'' comp., but without Tobin Sprout's excellent backing vocals. Stick with that version instead.

You Don't Know Me (I'm Your Dog)- 1 Pollard on guitar, Mitch Mitchell playing the worst drums in Dayton that day. Another drunk Sunday committed to tape? Woof!

You Make the Sun- 2 Poorly played and poorly sung demo sketch. However, there's some promise in the vocal melodies in there. Short and sweet.

Time Will Destroy You- 2 Lo-fi 80's basement eye-roller from Pollard pre-GBV band, The Crowd. The hook stinks. The band sound like they took a page out of the Book of Corniest Rock Standards. Not the brightest of pre GBV moments.

Delayed Reaction Brats [Demo]- 3 The original to this appears on the super rare split CD with Superchunk. So on this one, we basically get one guitar in the mix for the first half while the oringinal plays in the back. Then Pollard comes in with his acoustic demo, complete with interludes of Pollard substituting lead guitar parts vocally. Somewhat amusing, if not oddly impressive. Still a great song.

Pretty As Her Cats- 2 Pollard repeats the same line throughout and plucks some strings during a bout with bronchitis? Behind the skelatal effort, there's some hidden beauty in this one. Just does not quite make it through.

One Big Boss- 1 Piano pounding and guitar strummin' instrumental. Seems like more of a test to get levels than an actual song (or a lost outtake from the Sunflower Logic EP). Best part is getting to hear someone open a beer can! True audio vérité.

Mystery Walk- 2 Randy Campbell, man behind such lead vocal classics as "Sonny the Monster," takes the mic on this one as Pollard pounds the drums. At times, Campbell sounds like a portly monster, other times oddly like a young Pollard. Weird, how the context plays out. Overall, this sounds like an unused Springsteen bridge or something. Pass.

Son of the Sea- 2 Pollard has passed out again next to the 4-track and appears to be dead. To eulogize him, Greg Demos and brother, Jim Pollard play a wash of fuzz and garble over his semi-conscious body. Pollard then begins scream-singing as he lies in a state of paralysis. It's all very surreal and pretty terrible, but oddly compelling..... much like an Acid Ranch record.