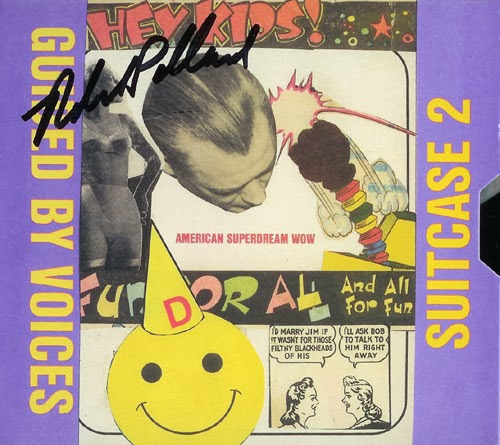 I Am Decided- 5  Solid chord, pop-garage that has that classic nostalgic/melancholy feel of mid-90s GBV classics.  Why this was left off of anything, and destined to appear on Suitcase 2 is anyone's guess. But thankfully it helps open up the second disc of Suitcase 2 on a huge, triumphant note.

What About the Rock?- 1 '87 song that is pretty much “World’s Coolest Rock Star” off of the Meltzer/Pollard The Completed Soundtrack for the Tropic of Nipples LP released in 2002.  Answering machine message bonanza. Time clocked at 3:53 of an answering machine, in fact. The song itself, you ask? It's some fiddling, psych nonsense that is pointless after listening to 3:53 of answering machine reels.

Telephone Town- 3 Not particularly memorable, but a bit of a standout in the clutter of this collection. A non-British Bob from ‘87 clearly sounding like an outtake from Sandbox. Again we have an unassuming, 2 plus minute, jangley, melodic song complete syrupy melodies.

Hey, I Know Your Lady- 1  48 seconds of bullshit with warbled guitar, snare hits, and Uncle Bob engages in some late night drunken ranting while a boombox, unfortunately, rested too close to his “press-record” finger.

Headache Revolution [Original Version]- 3 Later to become  Boston Spaceships tune that even spawned it’s own 7’’, this is a short, intriguing, and worthy demo.  Merely a two part sketch, that shows promise and eventually delivers down the road.

Every Man- 3   Pretty repetitive, no-fi garage early ‘60s tune that sounds like a few kids just learned how to play bar chords. Verses are pretty dreary, but beneath all the useless muck is a chorus that is undeniable AM radio ready-with subtle melodic hooks.

Alibible-  1 This would later end up on Psycho and the Birds' All That is Holy LP, complete with Todd Tobias studio tricks.  This version is just as shitty, perhaps shittier.  Why Pollard felt this should be released twice under any circumstance is baffling.

Zarkoff’s Coming- 2   Should be the most worthless track. And don’t get me wrong, it is.  But somewhere through the Jim Pollard guitar strums, and Bob Pollard howling off “You quit screaming at me,” I kind of like hearing it. Gives the impression that this was a drunken idea rooted in some far greater idea that never came to be.

Super Sonic Love Funky Love Gun-  Same song as the Acid Ranch recording off Acid Ranch As Forever... Read the review over there.

Perch Warble [Studio Version]-  4 Released as an outtake from Bee Thousand on bootlegs, and a demo on Suitcase 2: Abridged...  This is the most hi-fi version. An uptempo punk-popper with some surreal, warbled prog vocals. This may sound a bit silly but at it’s core it’s truly a lost gem.

You’re Not the Queen Anymore-  4 Simple, almost idiotic vocals and equally simplistic acoustic strums, but it tows the fine line between idiotically worthless and confessional surrealism. The latter wins out.

How Can You?- 2  Rather forgettable stab at folk activism by Pollard from 1982.

The Lodger Carried a Gun- 4   Sounds like something off of Bee Thousand for Christ's sake, minus the faux Brit-tongue. Mid-tempo and melodious ‘60s rock with slow winding verses, but less than stellar college rock type choruses. AND, the outro is unfiltered early REM.  But damn, those verses really nail it. Also, this song has the line, “In the Alien Lane”  hmmm.

Metro XVI-  1 Recorded in 1980. What the fuck is this shit?  Two notes plucking, and a hammer hitting a piece of sheet rock and two bottles?  They come in two’s, don’t they?

My Dream Making Machine- 1   “And a hemmy mambemee”  “And a memom bammm blmemmemee”  I think those are the lyrics.  If you ever wanted to get a sample Pollard’s Psycho and the Birds project, listen to this first... then proceed with caution. (however, why would you buy this expensive collection before you actually tried listening to Psycho and the Birds?)

Mustard Man- 1 1985 basement recording of some plodding two or three chord drivel that goes on for four long minutes while Pollard begs for the Mustard Man in cruddy baritone vocal styling.

Alone in Time- 2   Acoustic song with hushed melodic vocals. Not much of note here, but it does sounds like a sketch for a hundred decent-to-great GBV songs to follow.

Dusty Bushworms [Different Version]- 3  Also released on the Get Out of My Stations EP as an acoustic, sad sap laden song. Here, it’s presented as a full band slow jam, with a mildly catchy opening.  A red-eyed morning wake up song.

Free It- 1 Same song as the first part of “Medley” off of Suitcase.  This is equally as pointless. Flamenco acoustic guitar strumming meets inaudible lyrical dreck.


Are You Faster? [Demo]- 3 Electric and bellowing Pollard vocals.  Demo of the song that appeared as track 6 off of Under the Bushes Under the Stars.  However, the resemblance is minimal.
Posted by Eric Truchan at 8:06 PM