The Completed Soundtrack For The Tropic Of Nipples (2002)

The Completed Soundtrack For The Tropic Of Nipples
(2003, Off Records) 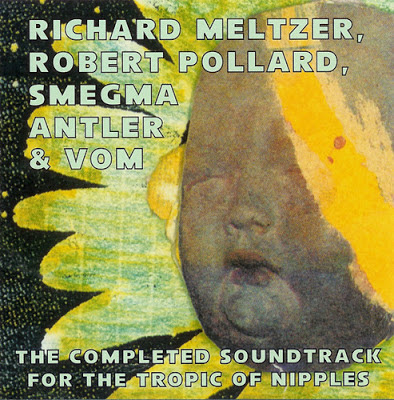 Welcome to, what I feel is, the SINGLE MOST BIZARRE Robert Pollard related release in the whole discography (aside from his comedy LPs not reviewed here). Quite a feat considering 3 Acid Ranch LPs, Nightwalker, Howling Wolf Orchestra, and the like lie under the Pollard belt. The 2nd most bizarre release can be read about HERE.   So what is this thing....?

The proper release title for this goes by Richard Meltzer, Robert Pollard, Smegma, Antler & Vom.  Okay. Again, what is it?

Acclaimed rock journalist, Richard Meltzer (Lester Bangs counterpart for Creem magazine, author of A Whore Like the All the Rest, part-time Blue Oyster Cult lyricist, punk rock contributor of pretension, and general noise monger), collaborated with Pollard on this in a weird collection of spoken word, noise rock, lo-fi collages, and vomit inducing bullshit. Which is not to say this collection isn't all bad. In its defense, to get the full nightmare, listen to this as a full collection, and digest it in the way you think you might enjoy, say, certain 3 song/1 hour long Sonic Youth EPs, or Can practice tapes.

The original format of was released as The Tropic of Nipples EP, a 12 song 7'' on 2/4/2002 on Off Records. Following this, a 22 track CD was released on June 2002, containing two more Pollard related tracks.  The Pollard selections were recorded under the moniker of Antler (Antler being Robert Pollard and his brother Jim Pollard, inept musician and general noise maker (see Acid Ranch, Howling Wolf Orchestra, Vampire on Titus, etc.)...)

The collection in full is a haunting, acid trip collage of bumper-car beat poetry, queasy noise, and punk inspired no wave. The end piece of the Completed Collection...does contain a 4 songs smattering of Vom, Meltzer's noise-punk outfit, live in 1977 which is worth a spin (maybe).  Here's an attempt to rate the brother's Pollard tracks (ANTLER) below, as specified by track number on the compact disc.................    o boy......

9. All For Sex and Better Whiskey- 2 Swelling noises, then Robert Pollard says some shit. Okay, this is the first noise, spoken word worth hanging with individually since it's not as bullshit as the rest.

15. World's Coolest Rock Star- 2 Starts with an answering machine clip. Cuts into 3 minutes of psych pounding that is the coolest Pollard brother's track on this mess of a record.

17. Revolver Tricks- 2 This track is a fucking breath of fresh air in this quagmire of smut! and it still fucking sucks!  Later, covered as a b-side on the Happy Jack Rock Records 7'' singles series by Stanley West.