Delicious Pie And Thank You For Calling (2003)

Delicious Pie And Thank You For Calling
(2003, Matador Records) 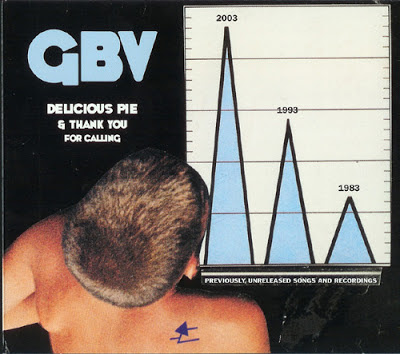 In 2003, Matador Records released the GBV Box set Hardcore UFOs: Revelations, Epiphanies, and Fast Food in the Western Hemisphere. The set included a best disc, a B-sides CD, a live cuts disc, along with a reissue of the Forever Since Breakfast debut EP on compact disc, as well as the Banks Tarver GBV documentary Watch Me Jump Start. Additionally, the disc of material worth noting for the completeist is the Delicious Pie and Thank You For Calling portion of the box-set.  This disc, like its King Shit and the Golden Boys predecessor is a box-set only release featuring all unreleased GBV related tracks.

While it sounds grand on paper, after going through the Suitcase collection, and with a second Suitcase perhaps in the compiling stage at this point, Delicious Pie... leaves little to salivate over. This collection also ends with a the first official releases of a smattering of demo tracks from Do The Collapse and Mag Earwhig!, some of which are worth a portion of the price of admission.

I- 1  Completely grating use of the word “I.”  If you suffer from epilepsy, proceed with caution. Not really kidding.

Back to Saturn X- 4 GBV-aphiles are fairly aware of the “Saturn X” report off Propeller, and about the aborted LP of same title. “Back to Saturn X” is a fairly simple pumping, kick ‘em in the groin, hard rock song. Slightly too lengthy, and definitely guilty of repetitiveness in the lyrics department, but still a favorable song.

You’re the Special- 2 Slow to frantic strumming pattern with Pollard singing lyrics that sound like they’re from an episode of Sesame Street. Sometimes sounds like he’s reaching for lines out of thin air, just getting them in before the line change.  Unimpressive.

Mother & Son- 2 Pollard, again, shrouded in reverb with the company of his sad sack acoustic guitar. Wholly forgettable two and half minutes of ho-hum doldrums.

Fire ‘Em Up, Abner­-2  Noisy, off-kilter thumping. Song is avant-prog poppy, but shoots itself in the foot when it goes for the easy hook by going to some weirdo guitar progression. Vocals are modulated beyond belief, sounding like they’re coming down the wind tunnel of a science experiment. Another outtake from Self-Inflicted Ariel Nostalgia.

Harboring Exiles- 3  Yet another outtake from Self-Inflicted...  Uptempo, pop-punk song with a dark slant to it.  Pretty un-GBV but still hooky despite it’s general sameness to half the songs in the universe.

Still Worth Nothing- 2 More outtakes from an LP that wasn’t particularly great.  This Self-Inflicted…outtake fairly enjoyable at first with it’s lazy verse hook, but soon veers off into unremarkable territory.  Mid-tempo, snooze fest.

Never- 1 Guess what LP this song was gonna be on?  YUP.  Thankfully it wasn’t, because it’s the most boring strumming, has lifeless noodling, blah drum beat, and vocals so lazy and unmemorable I got two dum to spel thingz ryte. Never gonna listen to this again.

Slave Your Beetle Brain- 1  Sounds like a tribute to the end of “Strawberry Fields Forever,” sans pan-flutes.  Just some backwards, warped sixties inspired crooning clipping your ears. A bootleg of this song can be found on unofficial releases with the title “How Can You?”

It Is Divine [Different Version]-  2 Early demo of the song would later be on the Go Back Snowball Calling Zero LP.  Decent electric guitar and vox sketch, that shows potential, but this version is fairly tough to discover the bright spots of what would eventually become one of the better songs off the Go Back Snowball LP. Too long too for it’s own demo.

They- 1  Deep acoustic strums and harrowing Pollard mystical vocals.  Black smoke and mirrors but not much here of note. Countless repetition of “They” can not save this song, it has only made it worse.

I Invented the Moonwalk (and the Pencil Sharpener) [Do the Collapse Demo]-  4 Yup, demo off the Do the Collapse is a dual guitar collaboration with Gillard.   What a great lost, intertwisting song this is. A shame it was’t included on the real LP. Multi-sectioned, with slight tempo and mood shifts.

Fly Into Ashes [Do the Collapse demo]- 4  Same song can be found on the Hold on Hope EP (or the Daredevil Stamp Collector 12’’)  but that’s of course the hi-fi version.  Here, we're given the lo-fi, boombox recording.  Still great. More intimate for the fans of basement dwelling.

The Various Vaults of Convenience [Do the Collapse demo]- 2 Another song that never made it to a real bonafide LP. This starts bright, and takes a dark unwelcome twist similar to something off Universal Truths and Cycles. From there, it’s pretty much sad, useless pity.  Perhaps best left off Do the Collapse.

Trashed Aircraft [Do the Collapse demo]- 3 Different from the ’92 recording that surfaced on Suicase, but the term different is used fairly loosely. This has some electric guitar noodling that fits around the acoustic like a miniskirt on a bull.  Eventually, Boston Spaceships gave this the electric treatment on the Zero to 99 LP.

Running Off With the Fun City Girls [Mag Earwhig! demo]- 2 Unimpressive lo-fi, duel guitar demo of what would later appear as the Japanese only bonus track to Mag Earwhig!  In it’s early stages, it’s still awkwardly constructed and kind of industrial.

Portable Men’s Society [Mag Earwhig! demo]-  1 One can surmise that working with Gillard on demos gave Pollard a newfound breath of fresh air of all things ‘70s and big ‘80s arena styling that he might have once overlooked.  On Mag Earwhig! this stands as the longest, most overblown spacey output for a song.
Here, it’s pretty rough to get through all 4 depressing minutes.

Choking Tara [Mag Earwhig! demo]- 4  Not to be confused with the LP version, or the unsuspectingly uplifting “Creamy Version,” released on the Matador Records 10th Anniversary compilation. Here we get the rough demo. Bottom line; regardless of the level of fidelity, it’s a great song.


Man Called Aerodynamics [Concert for Todd Version]- 3 Acoustic guitar/flanger version of the blistering opening to UTBUTS. Interesting for historical purposes for sure, but not nearly as good as the guitar assault of the original version.
Posted by Eric Truchan at 9:47 PM