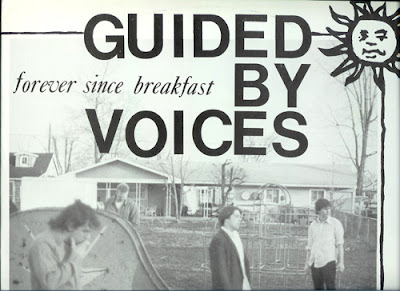 Forever Since Breakfast; the first official Guided by Voices release out of the gang from Dayton, Ohio. This 7 song EP is in stark contrast to anything GBV, or even Pollard, has ever committed to wax following this release. In short, this EP sounds a lot like R.E.M., which to be fair, seems to be the general consensus for FSB.  Unlike some debut releases from great bands, this one is actually worth a spin. And unlike their first full-length the following year, Devil Between My Toes, this is worth the wax.

Rumor has it (from Pollard himself) that at least 100 of these were smashed against a wall during a drunken night in the '80s, next to unsold boxes of records.  At the time, GBV rarely played out, and soon went on a near 7 year hiatus from playing live. Hopes of traction for the release seemed quickly lost.

However, the EP was later released in a series of 500 red wax copies on the Fading Captain Series label in 2005, and was released on CD as a part of the Hardcore UFOS: Revelations, Epiphanies, and Fast Food In the Western Hemisphere on Matador Records in 2003. As for all the frustrations of record smashing's past? Current first pressings go for an exorbitant amount of cash on the market, if you can find it.


SIDE A:
Land of Danger- 4 For a band that’s left such a lo-fi legacy, this kicks things off with some fairly big production. From it’s guitar sound, to it’s intertwined speak verses, this recalls a lot of REM, Let’s Active, and some Replacements from the era. Not incredibly original or catchy, but dynamic and BIG sounding.

Let’s Ride- 3 Airy, contemplative, clean jangle in which the verse is much better than the chorus. Comes equipped with some cheesy lyrics that actually make sense considering the Pollard cannon.  The set-up is greater than the payoff for this one. Seriously, the verses get a 4 or 5, but as a whole I'm sticking with a 3.

Like I Do-  4 Haunting acoustic lo-fi number played over what sounds like a newscast and random television channels flipping.  A formula followed and released for years to come on Bee Thousand/Alien Lanes era.

Sometimes I Cry- 4 The pop anthem of the EP, the heaviest hitter with a somewhat baroque bridge. Sounds like something from the TVT Records phase of the band. This one also has quite a big sound and is awfully good.


SIDE B:
She Wants to Know- 2 I don't know she very well, but I know she wants to know why this song is so painfully dull. After an A-side of such effective attitude, hooks, over-the-top revelry, and attic confessionals, this kicks the B-side off with lack of purpose.

Fountain of Youth-  2 Flying The Who flag high, the band launches into great Stadium strums before diving into ‘70s guitar indulgence for a bit.  Overly long song. No guitar pedals were injured on the making of this song. Just abused. Over indulgence happens.

The Other Place-  5 More 80s REM worship in the verses, with big catchy choruses, and great parts.  Pianos, effects, and upfront clean guitar makes this one, again, big. I dub this track a hidden gem at the end of mixed, albeit strong debut EP.