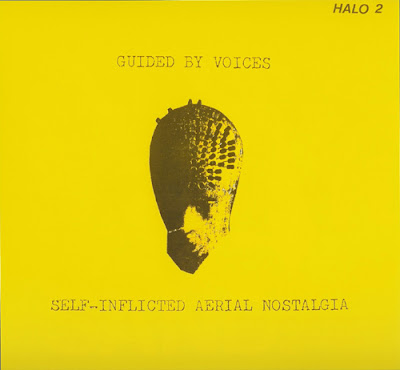 Nearly two years removed from their LP Sandbox, GBV returned with a follow-up LP of mixed "alt" genres. Like Sandbox, the fidelity is also mid-fi. Recorded at Steve Wilbur's 8-track garage, a staple recording spot for the band, up to and including portions of Propeller. A few of these songs were eventually played live, and became a part of the GBV pantheon of notable tracks, most distinctly "Chief Barrel Belly," "Liar's Tale," and "Navigating Flood Regions."

SIDE A:
The Future is in Eggs- 4 Reverberating drums open the song, sounding not unlike the beginning of a Clash track. But wait, the cold guitar drones come in and now it just sounds a bit like Joy Division. Pollard’s vocals are both distant, freewheeling, and markedly catchy.  An uninviting song that’s somehow equal parts comforting and quite strange.

The Great Blake Street Canoe Race- 3 A jangled menagerie reminiscent of a creation the Byrds would have released. Other than the general airy feel of the songs, there’s not much else memorable about it.

Slopes of Big Ugly- 1 Boring reverb guitars ring and rang all over the place while Pollard croons. No thanks. Save it for the Suitcase collection.

Paper Girl- 3 The out-of-place surf rock song “Crux” from Devil Between My Toes resurfaces, sounding like a rerecording off of a boombox,  but then the song stops and breaks into a pretty acoustic number that’s pretty awesome.

Navigating Flood Regions- 4 Repetitive, hooky guitar riff holds together much of the verses. Lo-fi, mid-tempo hard rock song. Some of the reverb on the vocals are somewhat distracting and take away from the quality of the song.  Sounds like it could have been on Bee Thousand outtakes.

An Earful O’ Wax- 2 Pretty run of the mill song that goes on way too long. A few good ides that just don’t seem to go anywhere interesting. From the horns, slow builds, drum trickery nothing really sticks.

White Whale-  3 Pound it out now, with dreamy vocals. Want to shake a fist, but the vocals on hyper-reveb make it a bit tough. Audacious, maybe? But possible one of the first times production hurt a GBV song.  A fairly solid song nonetheless, but not one you’d often return to.

SIDE B:
Trampoline- 3  Simple guitar-played-as-bass line formula, with guitar strums, and eventual actual bass lines underneath.  Stealthy song that creeps up on you, but never really delivers much.

Short on Posters- 3  4/6 chord-picking number where Pollard tries to hold it together with some curious vocal stylings.  And on it meanders to a rather perfunctory finish.   Short length of the song makes the “La-la-la” outro acceptable.

Chief Barrel Belly- 3 A truly thunderous riff of this verse is fucking awesome. The chorus unfortunately is pretty lackluster.  A wasted, powerful verse with no real over-the-top chorus?  Yup. A sad and familiar tale.

The Qualifying Reminder-  2 Rhythmic beat that some kid in beginner concert band would play over his more talented friend's post-punk guitar line. That’s exactly what this track is. The mounting chorus attempts are pretty futile and obnoxiously crunchy.

Liar’s Tale- 4 Simple 3 chord pop-ditty with tremolo guitar and trebled Pollard vocals stuck on the umpteenth usage of reverb. An excellently demoed pop confessional. The type of song that made their Bee Thousand-era EPs so great.


Radio Show (Thrust the Wizard)- 2 Far-reaching rock-opera type song. Ping-pong, wavery psychedelic vocals pass back and forth, as the stomping songs continues but doesn’t do much else besides repeat the riff continuously.