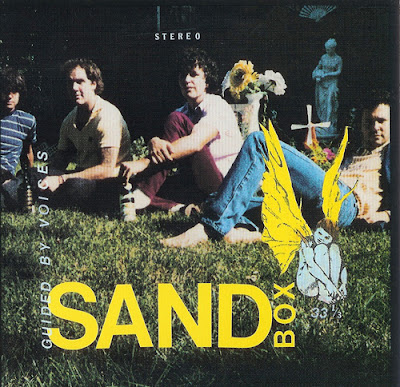 The 2nd LP of 1987 finds GBV yet again returning to their R.E.M. style, "college rock," of the Forver Since Breakfast EP, with a consistent hi-fi, yet low-budget fidelity throughout. The LP, like the aforementioned EP, is a bit of a stretch from GBV recordings that would eventually come about. However, it is rather solid, brisk, and deserves more attention and praise than it often receives. Most of the songs off this LP have never been played live, and it seems as if this LP is generally brushed under the rug from fans and the band alike. Yet, in my opinion there is not one dud to be found.

It was later rereleased on LP and CD in 1995 as Box on Scat Records, and again on CD in 2002 from Scat Records.

SIDE A:
Lips of Steel- 4 Immediately evident improvement of production from TDBMT.  R.E.M., ‘80s indie influence still permeate.  Also, gotta love that blink and you'll miss it Stooges type solo. First instance of Pollard's signature faux crowd interaction at the close of the track, which is a tactic that becomes more prominent in mid-years.

Visit to Creep Doctor- 4 Similar tempo and style to “Lips of Steel.”  LP begins with an effective one-two punch. Blazing track, under a minute and a half.

Everyday-  3 Acoustically strummed, band backed lazy mid-west ‘80s song. Song to put on while drinking some beers in a summer twilight. A dated vocal/drum reverb provide the backdrop over the strum of the acoustics.

SIDE B:
Can’t Stop- 3 Pulsating and predictable guitar line leads into pretty straight forward, hard rocker of a ditty.

The Drinking Jim Crow- 3 Sounds like a precursor to Pollard’s later perfected British rock accent. Grandiose declarations sung at anthemic volumes, but unfortunately over not much of note. Cool guitar swirls toward the end, though.

Trap Soul Door - 5 The first of what sounds like vintage Matador-era GBV creeps up in the catalog in just over a minute. A unheralded classic lost in the early annals of the discography.

Common Rebels- 2 Call and Response guitar parts. Sounds like this was influenced by more than a few spins of Tommy, especially the drum build up in the finale.

Long Distance Man- 3 Catchy acoustic number, but pretty unorginal. Have you heard "Nowhere Man" by a group called The Beatles?  If you said no, listen to that instead.

I Certainly Hope Not- 3 Unhinged shifts in rhythm and tempo make for an awkwardly arranged song. The chorus sounds a bit Fleetwood Mac-esque. Nothing to write home about, but interesting to be fair.