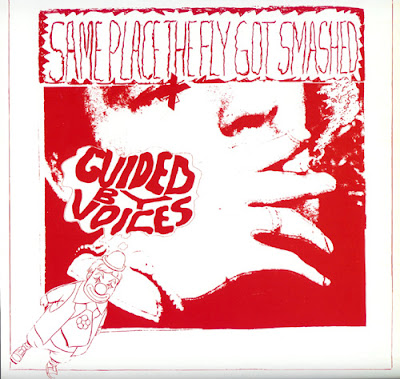 Often noted as the last LP before the success of GBV came to fruition, this 1990 LP is also loosely considered a concept record. A concept in itself that Robert Pollard was a rabid fan of, given his obsession with '60s rock ( more specifically The Who). Supposedly, this record is based on alcoholism, suburban exile, and aging regret.

The fidelity, like the previous 2 records is fairly consistent, with a couple lo-fi, collage cuts thrown into the mix. The record is also notable for some serious live staples, played until the first GBV break-up in 2004, and including the reunion in 2011 ("Drinker's Peace," "Pendulum," "Murder Charge.").

This was later released on LP and CD through Scat Records as a part of Box in 1995, and later on CD through Scat Records. This was also rumored to be the last GBV record, before some courage was mustered in 1992 to again record the intended "last" GBV record Propeller, as Pollard, Sprout, and friend wallowed in the mundane day to day of Dayton, OH.

SIDE A:
Airshow ‘88-  2 Album opens with sound clips from TV shows. Breaks into barbaric basement screams, and buzzing guitar. Definition of lo-fi.

Order for the New Slave Trade- 3 Drug-dragging, hungover pace with swirling guitar parts. Big choruses, with a mid-fi sensibility. This song is a welcome sign that albums to come are headed in the right but this particular tune is average at best.

Drinker’s Peace- 5 Classic GBV song, a beautifully haunting basement recording. One for the lonely hearts mix-tapes and closing song to many late nights of drinking and fighting insomnia. Excellent.

When She Turns 50- 4 Acoustic number, that’s not wholly original sounding, but has a healthy dose of welcoming familiarity. Great lyrics too.

Club Molluska- 3 Sounds like a drunken improv session. Grating to some,maybe, but  haunting closer to side-A that deserves to be revisited from time to time.

SIDE B:
Pendulum- 5 Upbeat, upstroke song with big hooks. File this one under "Radio friendly GBV". Overt reverb on the vocals can be tough to listen to, but a great song nonetheless.

Ambergris- 2 Weird, throw-away track relegated to the Suitcase, but unleashed on this full-length.

Local Mix-Up- 2 There’s a lot about this song that annoys me.  Annoying hook. Annoying arrangements. Wasted parts. And six minutes long? Are you kidding me? However, the Hendrix sequence near the end before it melts into “Murder Charge” is pretty rad.

Murder Charge-  5 What a great over-the-top song. Spin the volume up to ten. Luckily, this was deservedly readopted into mid-00's GBV live sets.

Starboy- 3 Hushed number, with acoustic plucks. Interesting, and short. Worth a couple visits.

How Loft I Am?- 4 Sugar, ‘60’s pop that borders on almost completely idiotic, but still staples itself into the cranium. Be forewarned that this song may cause spontaneous whistle fits, and late nut drunken singing fits as you reminisce about this charming 1 minute and change closer.