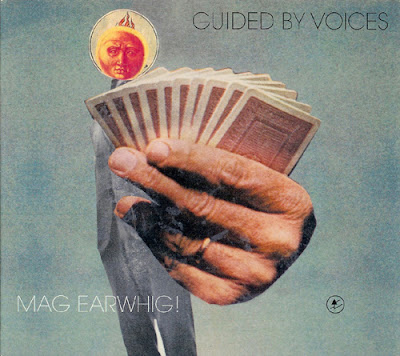 The last Guided By Voices LP to be released on Matador Records, until 2002's Universal Truths And Cycles, Mag Earwhig! remains known as the transition album as it boasts a revamped Guided By Voices line-up that had gone from the "classic" to the Cobra Verde insertion.

At this point, the minor indie press frenzy stirred up by Pollard, has become well documented. While working on the record, Pollard announced to the press that he had "kicked-out" the members of GBV.  Classic rock star story weaving? Ego-maniacal history making? Tongue-and-cheek good natured fun?  Whatever the case, Pollard did not, in fact, give members of GBV the boot.  Long-time anchor and songwriter Tobin Sprout moved from Dayton, OH to Michigan with his wife to pursue a career in art. Long time friend, and collaborator (see Acid Ranch), Mitch Mitchell sighted financial troubles on the home-front. Drummer, Kevin Fennel found himself facing serious substance abuse problems at the time. And touring bassist and friend, Greg Demos left to pursue his career in law.

With that, Pollard recruited Dayton, OH's Cobra Verde as his backing band (with 2 LPs and an EP under their belt, at the time). This opened the door to the arrival of GBV lead guitarist Doug Gillard (known for his work in indie powerhouse Death Of Samantha),  who would become a frequent collaborator and anchor of later period GBV. In reality, the LP contains only a handful of Cobra Verde backed studio tracks, with mid-fi, Pollard solo tracks.

The LP was released on both CD and LP to somewhat mixed reviews, but still remains a fairly strong LP. This record also reveals a slow starting shift for GBV into a bit proggier territory.

SIDE A:
Can’t Hear the Revolution- 2 After 5 consecutive albums with absolute killer opening tracks, Mag Earwhig! starts out pretty fucking lame. Psychedelic, British harmonies straight out of the summer of love, with pulsating fuzz guitar and obligatory noises. Written in about 5 seconds. Too much pastiche for me.

Sad If I Lost It- 4 Moody, wispy rock balladry. Verses are pretty bland, but the choruses are big, bright, and pretty. Yes, pretty.

I Am a Tree- 3 Doug Gillard penned-song with gigantic guitar riffs. Released as one of the singles from this album, but this song’s pretty meeehhhhh considering the GBV catalog. The piercing riff is highly annoying and the lyrics are flat out lame. “I am a tree.” Oh great, you’re a bunch of strong dudes. And almost 5 minutes!  Please.

The Old Grunt- 2 Moody and surreal acoustic track. Blows up into grand guitar buzzing and even more surreal Pollard preaching. Best line: “Did his wife in with dueling banjos.”

Bulldog Skin- 1  First single released off this album is completely awful and some form of off-putting southern rock bullshit. Is almost unrecognizable as a GBV song, and more importantly has a terrible hook that forces you to sing the words “bulldog skin.” No one wants that. If you wanna stomp a boot in some podunk bar in the summer humidity while watching Nascar, “Bulldog Skin” is for you.

Are You Faster?- 4 Short, bizarre song similar to stuff off the The Grand Hour EP, only a little better. Great self-backed vocals by Pollard, and fuzzed guitar jangle to lead us out is fantastic. Snippet material that rules is also a plus.  Breeders-esque homage version is available on Disc 2 of Suitcase 2.

I Am Produced- 5 An irresistible sad sack, moody acoustic number, again with Pollard self-backed vocals. The ending rant of this song will personally be forever memorized and repeated. I would suggest the same for anyone as a life enriching tip.

Knock ‘Em Flyin’­- 3 Weaving awkwardly in and out of different rhythms and sections, this song slightly misses the mark. Sounds like 4 or 5 snippet ideas in similar enough keys to form a full song. Ehhh.

Not Behind the Fighter Jet- 5 Uptempo, incredibly simple and hooky as hell.  Punk-pop at a steady, no bullshit stream-lined pace perfected with a spacey fade-out complete with JET NOISE!

Potable Man’s Society- 3 Proggy, overly long, chopped up rock with irritating space synth noises throughout. Trim the fat, and I’d be down to give this exaggerated arena rocker a clearer chance.

Learning to Hunt- 3  Ever have a haunting dream in space? Me neither, but this is what it's like I’m sure. Like walking through a cloud of smoke.  "Learning... " is a floating, haunting ballad. One of unsettling beautiful, albeit somewhat dull proportions.

The Finest Joke is Upon Us- 5 Extremely slow heavy rocker, with big choruses. Slow burner worth the rewards of Pollard’s bellowing hooky vocals. Anthemic and overtly redemptive.

Mute Superstar- 5  Grade A grunge flavored riffs in the verse complemented by killer jangled chorus. Short and great. Repeat if necessary. Also, is this actually about "the" Tommy ?

Bomb in the Bee-Hive- 4  For a lopsided and slightly awkward album, this track is quite a decent closer. Start, stop, dynamic, urgent, and is oddly catchy. For a true GBV fan, Mag... becomes a better record with repeated listens. However this particular track does help strengthen its quality by providing a solid finale.
Posted by Eric Truchan at 9:58 PM