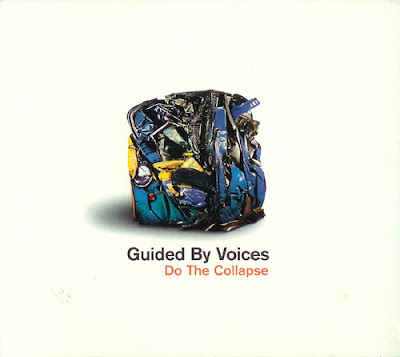 Following 1997's Mag Earwhig!, Guided By Voices made the jump to achieve household name status, or at least they intended to. No, seriously. Signing with TVT Records, the band aimed for a proper "hi-fi" polished rock record to help break them into the mainstream.  The end result; a solid, properly glossy LP without any household name status, unless your household is made up entirely of indie rock fanatics, in which case, you've been in college too long. Upon it's release, the LP did help score minor success for the band in the way of television soundtrack appearances, but more notably aided in alienating some long time fans.

Gone is the lo to mid-fi recording pedigree that Guided By Voices had essentially considered a fifth member, and championed as an artistic limitation. Working with producer/The Cars legend, Ric Ocasek, the record is a slick, polished eager for radio record. With that being said, it's not without its typical Pollard tinged cryptic pop. The record does suffer from some needless overproduction (unnecessary synth parts, distracting orchestral swells), and contains the fan lambasted "Hold On Hope"; the schmaltzy, pop-ballad push for an all out hit.  The song, and record have grown better over time, and Do The Collapse remains a fairly solid listen.  Somewhat surprising, however, is the inclusion of outtakes from the session, later released on the Hold on Hope EP, many of which prove strong contenders for any GBV album.

SIDE A:
Teenage FBI- 5  Over-produced, new wave version of the  (better) song that's on the Wish in One Hand 7''.   BUT, still such an amazing song, who cares. Putting elephant noises can't even hinder this song from greatness. Synth filled and drenched with a nasally Pollard, and one of GBVs very best.

Zoo Pie-  4  Mid-tempo, grunge-soaked pensitivity. Weirdly big in sound. May take a few listens but "Zoo Pie" is undoubtedly a strong contender. God fucking dammit, this song seriously is an unsung hero... .but doesn't quite take the title.

Thing I Will Keep- 5   A reflective mid-'70s style song with electricity of the mid-90's. Some of the sweetest melodies you can dig up. I dare you. Dig it up.  This song is a perfect addition to the soundtrack for the best and worst day of your life. My goodness, out of breath.

Hold on Hope- 3 The somewhat infamous single off the album. This sappy, pop ballad does get muddled by Ocasek production.  Extremely lame soft rocker, but again, production is the biggest culprit in this case. If on Propeller for instance, might not bat an eyelash and would wave the lo-fi love flag (if there were such a thing). Here, though, this is actually slightly cringe-worthy. Pollard himself as expressed a certain disdain for this song in interviews. One example in which the demo version is better. Check it out on Daredevil Stamp Collector.

In Stitches- 2 Is this the entrance music for a WWF wrestler? No, but a fibber could have me fooled. Well, for a second at least, before it breaks into soggy, proggy space rock intervals. I am not left in stitches. Ba-zing.

Dragons Awake!- 4 Such a classic acoustic opening with surreal '60s melodies accompaniment. One of those "If it were on Propeller, it might kind of suck" but on Do the Collapse it's pretty fucking awesome and slyly epic kind of songs.

Surgical Focus- 5  1 E and a 2 on the hi-hats brother! I WILL keep you and cleanse you if all your songs are this great.  Grandiose choruses that are both are incredibly regretful and uplifting at the same time. Pull at my emotions why don't ya?

Mushroom Art- 4 Radio ready bass plopping with guitar stabs. Can't figure out if this is an average song disguised in big production or a great song fuddled by big production?  Who cares? It's awesome.

Much Better Mr. Buckles- 3 Mid-tempo heavy hitter with gnarly yet subtle synth hits. Power-pop schmaltz for sure, but on the right side of the coin.

Wormhole- 5  Indie-spiraling jangle with late 60's mid-range syrupy verses with a great guitar riff.  Has the feel of a Suitcase demo fully fleshed out into a great, memorable song that both kicks you in the head while leaving the rubber sole pattern embedded in your brain.

Strumpet Eye- 3  Short and melodically ascending. Also seems similar to a Suitcase demo that has come to fruition but still lacking some great stuff.  Love those guitar leads though. Whoa!

Wrecking Now- 5  A quality guitar riff loops throughout this light indie song with a perfectly melodic nailed down chorus. The synth noodling and string production actually aids the song along. Yes.  Need a wedding song to freak out your family (one that your weird uncle might actually be into)?

Picture Me Big Time- 4  Downtrodden, jangled verses build up poppy choruses with a copped Beatles riff. Gigantic and fantastically fanciful Pollard bellowed vocal melody throughout. Yeah, you can yell the chorus anytime, anywhere. Might get you out of a speeding ticket if yelled at a cop. So far I'm 0 for 1.

An Umarketed Product-  5  Short and to the point punk-pop song in a British, yet Ramones-ish fashion. Incredible verse flow into the one time "chorus." Just amazing.  Such a great closer. Worthy of countless listens.