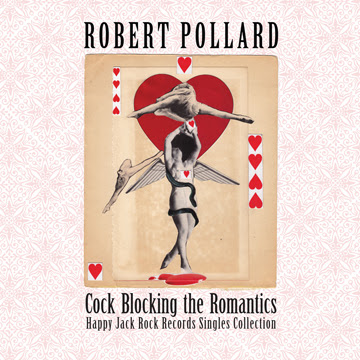 Okay. What the hell is this?

In the tradition of rock and roll singles clubs, Robert Pollard decided in 2007 to launch his own!  A 7'' a month for 12 months when the lucky bidder signed up.  The A-sides of each 7'' contain a track off of either Coast to Coast Carpet of Love or Standard Gargoyle Decisions, both of which were released on 10/9/07 on Merge Records.

Each 7'' was released on Happy Jack Rock Records, and came in a plain white sleeve, limited to 1000 copies of each.

After the initial release of each 7'', all remained available via the Rockathon records website for order. In 2013, the remaining 7''s were gathered up, stuffed in a box set, and sold as part of 2013's Record Store Day as Cock Blocking the Romantics.  A clever ploy to move product?  Maybe.  A new collector's item was born, and empty boxes were then sold on the Rockathon Records store website for the original collectors who purchased the 7''s back in 2007.

Here is a b-sides review of all unreleased tracks from those 7''s, as all the a-side appear on previously mention LPs. There are 2 covers from other artist on these b-sides as I point out, in addition too 2 noise collages that leave a bitter taste in my mouth.  Anyway, all b-sides are currently available as a single download on the GBVdigital website to sum it all up.

-Rud Fins 7'' (a-side, 6/22/07)
Piss Along You Bird- 4 Driving force behind this restrained Pollard track. Great verse with rad hooks, and solid a brick chorus.  Why is this a b-side?  Brisk, sharp, bright, and it POPS!

-Spider Eyes 7'' (a-side, 7/22/07)
Battle For Mankind- 2 Listed on the sticker as a Pollard- Rich Turiel collaboration. Bizarre noise collage. A mix between "Revolution 9" and experimental short film. Not a "song" per se, but pretty rad avant piece.

-Current Desperation (Angels Speak of Nothing) 7'' (a-side, 8/22/07)
Met Her At A Seance- 3  No real new ground broken in this stream of story-telling lyrics tune, complete with a chorus like-flat soda. Something's here.  I can fucking feel it. But then, no. A lot's missing. Dig the verses though, but fails to connect.

-Pill Gone Girl 7'' (a-side, 9/22/07)
Coast to Coast Carpet of Love- 2 Does not appear on the LP of same name. Riff rocker that spills into breezy, syncopated choruses with no real grounding.  Cool chanting at the end though.  Ehhh...

-Shadow Port 7'' (a-side, 10/22/07)
Be In the Wild Place- 4 Urgent, jangley verses that stab forward. Jittery and hooky as hell. Choruses hold up nicely in jilted drum barrage. Easily hummable after a few spins.  Short as a broken matchstick too.  Nice b-side surprise.

-Count Us In 7'' (a-side, 11/22/07)
Sixland (John Slough Version)-  Okay, so the story goes that "Sixland" was recorded by GBV after a European tour with the Breeders. The master tapes were apparently lost. Eventually, the demo would appear on Disc 3 of Suitcase 3 (aka, disc 11 total of the Suitcase series). John slough, engineer and friend loved the track so much he covers the song "Sixland" on this b-side. But at this point, I could care less.  I shall not rate this.  It's a cover of a Pollard song, on a Pollard b-side. NEXT...

-Dumb Lady 7'' (a-side 12/22/07)
Street Velocity- 2 Guitar lead and general riff boarder on 70's inspired annoyance. The rest is a stop-start, see-saw guitar mess of directionless arena rock. And it breaks the 3 and half minute mark.

-Youth Leagues 7''(a-side 1/22/08)
Spirit Of The Fly- 4 Stereo acoustic riff that's simple as the day is long and flat out fucking awesome. The perfect Pollard pop riff to stuff in your pocket. Grainy vocals break through over the riff. When the off-the-cuff works, it sometimes connects deep. Tape fades in and out, and swells into hi-fi instrumental, hypnotic riff of same song.  GBV spirited and inspired!

Revolver Tricks [Stanley West Version]-  OKAY!  BULLSHIT!  Another fucking bullshit b-side.  Stanley West (?), covers "Revolver Tricks" a bizarre as fuck track off the MOST bizarre Pollard related release (read about it here), and it's stuck on this b-side.  Similar rip-off to the above mentioned John Slough cover of "Sixland."  NO REVIEW.

-Miles Under the Skin 7'' (a-side 5/22/08)
Frostman [Long Version]- 4 "Frostman" is a classic snippet lo-fi track off Isolation Drills, an otherwise hi-fi GBV record from 2001.  This, a longer version (of course), contains additional string backing. Still a great song, and this only adds to the foundation.  Haunting and beautiful take on it!