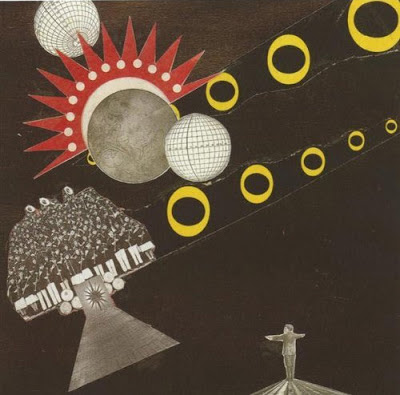 Following the same formula as their debut Brown Submarine, the follow-up is another strong collection of pop-garage-art tinged punk.  Like the debut, the instruments were recorded in Portland, with Chris Slusarenko playing all the parts, except for John Moen on drums.  Pollard added vocals and melodies in Ohio, and another solid Boston Spaceships LP was born.  The band continued to tour at this time, making it a true full-time gig for Pollard.

SIDE A:
Canned Food Demons-  4  Killer verse hook with mid-fi drums and guitar effect that recalls some mid-90's GBV. Big sounding chorus has simple, but slightly less enjoyable hook than the hazy verses.

Tattoo Mission- 4  Plodding drums with bar room riff under pretty cool melody hook. Even comes equipped with cello back-up. Whoa!  This one grows on ya.

Keep Me Down- 5 CLASSIC Pollard melody hook. Harder riff rock that takes a sugary bend when it hits the chorus.  Not as ground breaking as any mid-90s GBV, but properly recalls the memories.

Headache Revolution- 3 One of the more tossed off vocal melodies on the record.  A shame being that the song has potential structure.  Where Pollard generally sings over most of this stuff, there seems to be tons of bare spots, with a weak chorus. Released as a single for the LP, but just misses the mark as something special.

SIDE B:
Sylph- 3 Mid-tempo, flowing pop song that gets a bit muddled up in the choruses.  Feels like it had potential until the end phrases got all screwed up melody wise. A damn shame.  Could've been a great one.

UFO Love Letters- 1  Pollard cannot get over these damn UFOs.  I wish he had for this sleazy sounding, fuzz rocker, that opens up with "Daylight hurts when sometimes making love."  Uggh.

Lake of Fire- 2  Violins abound in the this sad, unmemorable, but fairly short filler song.  Not much in the way of hook.  Pollard sort of sings along to the bass line, and so it goes.  Ehhh, again.

Queen of Stormy Weather- 3  Bouncy, short tune that is affected by what sounds like Pollard's vocals were pasted over the music, and not mixed very well.   He's also pretty out of tune on this one. However, the triumphant second half of the songs saves this from being bog-down material.

The Town That's After Me-  3 Short and sweet Pollard tune. Just over a minute, but a fleshed out song.  Nothing too memorable until the repetitious fade-out. Right on.

Sight On Sight- 2 The epic, mini rock opera of the LP, clocks in at 4 bland minutes.  Unfortunately, this song moves at an anchor dragging-on-pavement pace, and is pretty grating in its multi-part sections fading in and out, each slightly more annoying than the last. HOWEVER, the song pasted in at the 2:40 mark is the best damn part. That snippet should get a 5.  Ends with more The Who sounding guitar strums.

Heavy Crown- 4  Basically, a reworking of "Everywhere With Helicopter" in the verses, but with different chorus. I think Pollard sued himself successfully in a private plagiarism lawsuit.  However you slice it, this is a pretty killer end track.