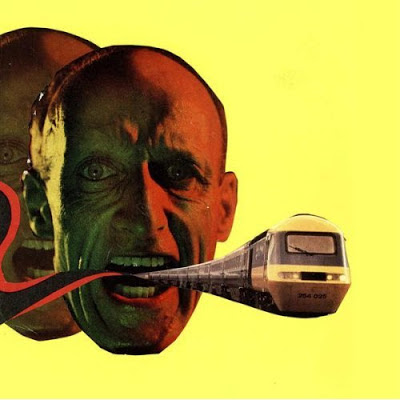 October 9, 2007. A day that will live in infamy. Well, maybe just for Robert Pollard. It was on this date, the man with the bottomless pit of songs released not 1, but 2 separate full-length LPs! Not that the feet hadn't previously been accomplished in the dustbin of history. Hell, double LPs are essentially two LPs released at once.  Speaking of double LPs....

The original idea behind Standard Gargoyle Decisions and its counterpart, Coast To Coast Carpet Of Love, was a fully loaded double LP via Merge Records.  However, upon hearing the contrast between songs, Pollard decided to release the LPs separately, or so the story goes. Standard Gargoyle Decisions was marketed as the "hard-rock" LP, while Coast To Coast Carpet Of Love was marketed as the quieter "pop" LP.   You be the judge. Standard... proves to be the weaker of the two...


SIDE A:
Killers- 4  Cool hooks, both with guitar and dead-pan vocals. Rocker status is pretty severe on this one. There definitely seems to have been some denim covered, crotch thrusting while this one was being recorded. Billed as the single from this LP too.

Pill Gone Girl- 3 A rather rambling followup to a solid opener. Structure is kind of all over the place, but a few listens makes the good parts stick.

Hero Blows the Revolution-  2  Here we find even more awkward tune, with its arrangements in shambles. No direction to speak of. Sounds like a demo recorded and shipped off to Todd Tobias to figure out. Upwardly inflected ‘70s arena vocal stylings toward the end make it a little better.

Psycho-Inertia- 2 Dirty stomping, rambler of a song. Loose as pare of XL rodeo jeans, and fitted with some goofy vocals. Lighten up, and it's not so bad. Looking for some classic GBV here, and you might vomit.

Shadow Port- 3  A slower take on the GBV classic “Underwater Explosions?” Close at first but far from the finish. Subdued and played cool by Uncle Bob. A slow builder for sure, but not much of a burner.

Lay Me Down- 2 Isolation Drills/Mag Earwhig GBV-era quick one. Strange hypnotic buildup that sounds like it was original composed on a children’s toy.

Butcher Man- 1 Uncle Bob in rare form here, straight off a serious bender perhaps? Seemingly caught after a full pack of smokes, and a three pound steak, with an extra side of carbs. This song proves amazingly stupid in several different ways-but is certain to be recited by serious Pollard-ites for years to come. A so bad, it's great Pollard tune for the ages. (Pollard fans: we all kind of love this, right?)

SIDE B:
In the World- 2  A little late 70’s British inspired swing permeates this track. The lead guitar line could definitely be a Fall song if taken out of context. Well, so could a lot of things in music, I guess. Not much else.

Here Comes Garcia- 1  An outtake from a Circus Devils record perhaps? Laughable vocal tricks, complete with awful title. Why Bob? Why have you forsaken us. RUN

The Island Lobby- 3  Eerie, ominous, post-punk lounge. Swooning Pollard in balladry form with guitar flourishes. Could be the mid-section of an aborted rock opera in some fucked universe.

Folded Claws- 2  Beginning guitar lines echo-early ‘90s before dropping off into Pollard’s new prog-world. Not half bad. Potential to rip off an old classic falls into average and directionless.

Feel Not Crushed- 2 Feels like I've already heard this cock-rocker on this album. Oh wait, there it goes falling into a dark, Sabbathian abyss. Oh, now it’s back to cock-rocking again. Reminiscent of a left-of-center, and fairly bad rendition of The Stones “Satisfaction.”

Don’t Trust Anybody- 2  Singing about icebergs and extinction ensues before the trippy multi-vocaled Brit part kicks in. Kaleidoscopic and cryptic, not necessarily good.

Come Here Beautiful- 4  Pollard on acoustic. Accented strums. Most structured song of the album, possibly. Great jangly guitar noodling in between accented strums. Beautifully haunting. A hidden gem buried near the end of the LP.

Spider Eyes- 3  Song loses all its potential from being the fastest, most solid track due to Uncle Bob’s ridiculous vocals, bellowing “sssspidder eyes” in no real tune at all.