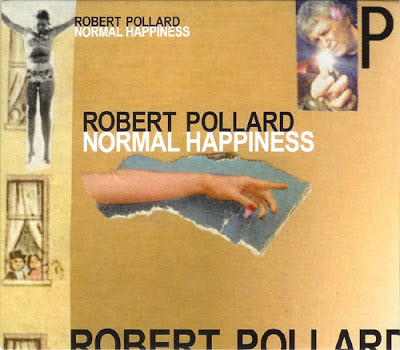 Following the release of From A Compound Eye, Pollard sprang into action with his second Merge Records release in a Pollardian flash. Where the first Merge double LP was a mixed, but generally exciting song factory, this record is a rather bogged down mix of off-the-cuff, prog-tinged pop that feels weighted. All this in the face of a hyped PR push, declaring this LP another "brilliant" outing. That's not to say the record is without its standout tracks and deserved moments, but they feel like diamonds in an overwrought rough.

The LP also ushered in a seemingly non-stop wave of solo LP outings that seemed to have had previously stalled between Fiction Man and From A Compound Eye. But with Guided by Voices on hold, Pollard solo outings became a yearly expectancy (some years seeing multiple LPs. Shit, even certain DAYS began to see multiple solo LPs, just a year and a day removed from Normal  Happiness.

SIDE A:
The Accidental Texas Who- 2 Jilted, rock opener that shows promise. But Pollard’s trip from falsetto to baritone vocals are goofy and disorienting. Just sing the damn song! If he had it, this coulda been one of the greats. THE GREATS!!! (shakes fist)

Supernatural Car Lover- 4 Marketed as the single of the LP, this track wreaks of some awkward choral parts that ebb and flow into the ultra light, and bouncy pop. Definitely the toe-tapper, whistle inducer of the LP.

Boxing About- 3 A pop song far too light for its own good, and one that exhibit pretty light hooks. None too offensive, but nothing earth shattering. Sounds like “Help” era Beatles acoustic pop.

Get a Faceful- 3 Well that title just sounds disgusting. Let me get my head out of the gutter a minute so I can wrap my head around that hypnotic, Pollard vocal tone. Simple, flowing pop number. Easy to digest, but sounds like run of the mill ‘90s college pop.

Towers and Landslides­- 3  Mid-tempo, Half Smiles of the Decomposed sounding track.  Again, lukewarm. No acrobatics here, but it makes some solid background music.

I Feel Gone Again- 3 Short number, that sounds a bit like late ‘70s arena, conceptual rock, but luckily ends before anything gets too grand.  Decent song. Short and sweet with a lot going on in about one minute.

SIDE B:
Gasoline Ragtime- 1 This song is awkwardly pieced together with terrible funky keyboard sounding guitar parts, followed by straight up stupid guitar parts.  Uggh, and what’s with those chimes... and saxophone. Laughably progressive.

Rhoda Rhoda-  4 Classic line-up era sounding track in every aspect. The “Rhoda Rhoda” repetition is a bit grating and keeps it from being a classic, mix-tape worthy number.

Give Up the Grape- 1  Give up the what?  WHY?  One of the funniest lyrical openings in the cannon. And on top of that, the song’s completely awkwardly arranged. A complete throw-away. So bad it's good.

Pegasus Glue Factory- 2  Longer, downtrodden song. Very Universal Truths and Cycles sounding, and different from the majority of the record. Kind of slowly moves along without much of note. Moody piece for sure, and Tobiasly mucked up at the end.

Top of My Game- 2 This song is part of the Pollard game, but certainly not the top of it. Actually, it’s so average in every respect. It’s just sort of there. From lyrics, to music, to melody. Ehhh.

Tomorrow Will Not Be Another Day­- 2 Clean guitar slathered, forgettable pop track. About as enjoyable as saltless chips or sugar free sugar. Unless you like those things. If you do, what is wrong with you? Do you have a medical condition?

Join the Eagles- 1 Grab a blanket and tuck in. Probably the most boring song on the album. On top of that, awkwardly threaded together melodies and wispy keyboards in the back do nothing.

Full Sun (Dig the Slowness)- 3 Pollard picks it up a bit to top this LP off. Fun start stops in this one, but not much in the way of memorable hooks. Cool, surfy guitar interlude that might ruin some other Pollard songs but works well enough in this.