Half Smiles of the Decomposed
(2004, Matador Records) 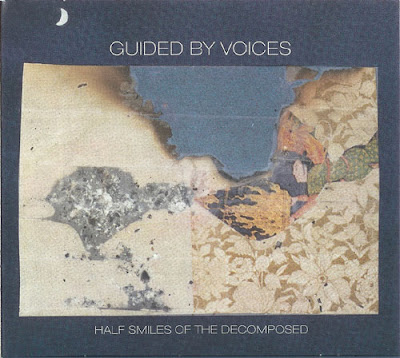 BEHOLD! The final LP of Guided by Voices! Well, that is, until 2011, when GBV officially released their first LP after their "ain't never gonna happen" reunion tour, with the classic '90s line-up.


The "final" GBV LP is a rather uninspiring affair. Borrowing too many pages from their previous two LPs, the album opens with a rather fully developed, and impressively strong A-Side, before flushing most of the B-Side down the crapper. However, Guided by Voices '90s mainstay, and fan favorite, Tobin Sprout returns on 2 songs, including the final track to bid farewell. Following the release of this LP, Guided by Voices embarked on a string of farewell dates, finally wrapping up their first go-round on New Year's Eve at Chicago's Metro. The final performance was caught on film, and released in nearly 4 hours of drunken, farewell glory in the live concert film The Electrifying Conclusion.   But, would this be the end of the Guided by Voices moniker?  Oh, please.

SIDE A:
Everybody Thinks I’m a Raincloud (When I’m Not Looking)-  4 Heavy hitting, upbeat, melodic opener. Airy song with crunchy verses and a great hook. Choruses not as exciting as the verse, but still pretty solid. Decent opener for the final GBV studio last hurrah.

Girls of Wild Strawberries- 5 Whimsical, light late ‘60s blissful folker. I think that kind of sums it up.  Extremely breezy, yet borders on cheesy-a particularly winning familiar formula of Pollard's. Has a “Glad Girls” feel to it, but much slower and much less vocally irritating.

Gonna Never Have to Die-  4 A hammering, bouncy song with a short killer chorus. Pollard sounds a little strained in the vocal department on the verses. Oh and watch out for the completely unnecessary synth part. Thanks, Tobias. But the acoustic solo by Gillard is pretty damn much on point.

Window of My World- 4 Most comparable to “Hold on Hope” in that these feels like pop-confessionals of Pollard getting personal, but still trying to achieve mainstream head-nods of recognition. Like “Hold on Hope,” it’s pretty cheesy, and may send a douche-chill up the spine.  Unlike, “Hold on Hope,” it has a pretty great hook in that charming and catchy intro. Overall this song is solid track that ages better by the year.

The Closets of Henry- 3 Sounds like UTBUTS era GBV with its winding indie guitar lead, and its explosive choruses. Unfortunately, in this case it’s more comparable to the filler of that album rather than the meat and potatoes.

Tour Guide At The Winston Churchill Memorial- 3  Almost insufferably slow at first listen, but the light understated choral hooks makes the slow build up worthwhile. It’s tough not to whistle, and stare in deep thought out the nearest window when the “lean on top of me now,” hook comes in.

SIDE B:
Asia Minor-  1 Complete toss-off garbage song with one of the most grating, awkwardly constructed GBV choruses of all-time.  Stupid piano bounces along, over a half-written, insufferably boring song.

Sons of Apollo- 2 Complete mid-tempo plodding along with little in the way of vocal hook and certainly no real melody of mention. Sounds like chords patched together to make an overly long plunk of a song.

Sing For Your Meat- 1   Talk about a half-assed snoozer. Drag me to bed, because I’m nodding off.  At a snails pace for 4 minutes while a completely forgettable hook plays. Just some slow strums and awkward chord progressions. Thankfully there’s a bridge to break it up. Oh, it’s somehow more boring than the verses.

Asphyxiated Circle- 2  Okay, this track is slightly more upbeat after 2 ass-draggers. Unfortunately, it’s still not much to write home about.  Swirling guitar crunch over that annoying 3-4 snare hit, drum beat. You know, the one that Pollard fell in love with in later GBV songs.

A Second Spurt of Growth- 1  Perhaps Pollard named this after the fact he prayed he’d get a second spurt of songs worth listening to on this final album. Not at all the case here.  One of the saddest sack, boring songs in the GBV cannon. So unmemorable, you may risk actually suffering from memory loss after listening. Where am I? Why is this happening?

(S)mothering and Coaching-  2 Here we get a slow opening into Uncle Bob monster/space themed vocals over ominous guitar chords evolving into a breezy and finally listenable pop song. Sounds completely uninspired though and devoid of much thought beyond the initial demo stage.


Huffman Prairie Flying Machine- 5   Here it is. That last chance to do right and close the final album out with a bang. Fortunately, this is very wonderfully accomplished. Tobin Sprout (!!!) guest stars.  Total throw-back to mid-90s GBV period from verse to chorus. Pollard’s vocals don’t quite shine like they could, but this is so refreshing after a nearly lifeless second half of the LP.
Posted by Eric Truchan at 10:15 PM