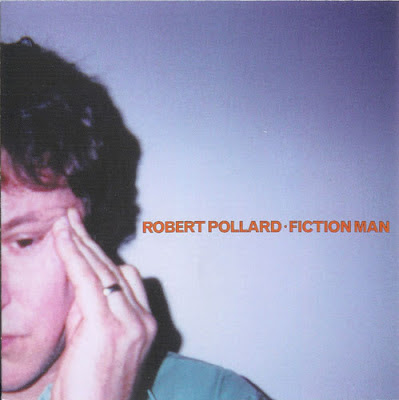 Pollard's fourth solo LP before the first official dissolution of Guided by Voices in 2004, Fiction Man finds Pollard in full prog-mode with this one. Produced by mainstay bud and instrumentation wizard Todd Tobias, Fiction Man feels like a pile of over produced leftovers, tailored with oddity blips and layered avant-crunch that don't quite fill out these ho-hum tracks. Half-Pollard uneven pop, half Circus Devils spill-over. The LP isn't without its bright spots, but those are more few and far between considering this was during a period that saw Pollard becoming progressively proggier and arena-force anthemic over a slew of his solo LPs to come and surrounding Guided by Voices outings (see The Pipe Dreams Of Instant Prince Whippet EP).

SIDE A:
Run Son Run- 3 Mid-tempo, and uninspired opener. A potentially decent chorus, unfortunately mucked up by Tobias production. Essentially, the tune is a few rearranged Pollard ideas made into an awkward sounding rendition of a few offerings you know you've heard before in the Pollard playpen, but can't quite place.

I Expect a Kill- 2 Dated, proggy programmed noises and guitar strums. Unmemorable Pollard vocals, although the vocal effort isn't without its merits. Oh, and more of Tobias fucking around.

Sea of Dead- 2 Dark balladry with moody snyths, akin to East River Pipe. However, unlike a chunk of East River Pipe classics, the song is wholly uninspired and unmemorable.

Children Come On- 4 Acoustically led, uplifting song with a great natural reverb on Pollard’s voice. Lack of studio tricks, sans some harp plucks or whatnot. Simple and quite effective, if not bordering on some sentimental cheese.

The Louis Armstrong of Rock And Roll- 3 Plodding rocker with some strange sound effects, and some bullshit synths. Luckily, Pollard’s hazy, relaxed vocals carry the song and provide a few croons worth your while.

Losing Usage- 2 Acoustic track with slapdashed vocals dropping in and out. Some off-timey guitar parts drop by for a visit but never really get comfortable to take a shit in your bathroom. Hold on while I sip this coffee.

Built to Improve- 1  Some potential is here waiting to break out into a decent rock song. Instead, this takes a sharp turn into an apocalyptic, acid dirge pit surrounded by a mote moody bullshit. Most definitely music fit for a soundtrack, but this movie sucks.


SIDE B:
Paradise Style- 5 The Who inspired guitar starts and stops with some jungle drumming. Excellent vocal melodies destroy! This track serves as such a needed breath of fresh air after some aural asphyxiations.

Conspiracy of Owls- 3 Twisting pianos lead into lush synth arrangements. Balladry in 4/6 that’s rather catchy. Avant-piano-rock-ballad? Maybe. This is some of the Pollard/Tobias solo weirdness I can hang a hat on.

It’s Only Natural- 3  Hard rocker with big starts and stops. Lacks any great vocal melody, and contains these lyrics “Shit and check out the camel toe website, It's only natural.” Catchy enough to sing along with at least, if you're not mortified by saying those cringeworthy lyrics aloud.

Trial of Affliction and Light Sleeping- 2 Urgent and schizophrenic. Modulated vocals in the verses jump-cut into sci-fi start-stop choruses. Maybe this could have been cool without the studio bullshit thrown everywhere.

Every Word in the World- 3 Light acoustic song with some bellowing vocal strains. Pollard's taking it in the groin and yelling it back home for the win. What? Oh, this is pretty good stuff too.

Night of the Golden Underground- 3 Following much of the feel and flow of the previous track, but with some percussive hits thrown in for good measure. Simple, easy listening pop song with pretty cool lyrics.

Their Biggest Win- 4 Possibly the song most sticking to the GBV "playbook"on the record, but the Tobias drumming is rather rough on this without the charm. The choruses are fairly grand, but sung with reserve, but still hooky as hell. Unwittingly, this can sink and remain in your brain, and you’ll be wondering what all your humming’s about later.
Posted by Eric Truchan at 9:59 AM