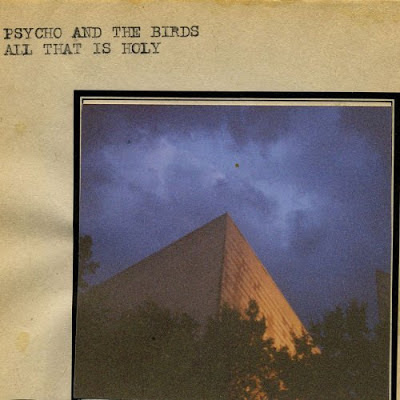 The first of, what is to date, three releases by Robert Pollard's side-project Psycho and the Birds.  The main selling point for All That Is Holy was the fact that Pollard recorded all this songs straight to boom box, like he would've in the old days!  However, info for the release also stated that it was written in one sitting... and if you know anything of the writing process, Pollard recorded demos into boom boxes for years (many of them are on the never ending, somewhat groin worthy, Suitcase collections). The songs on this LP were then sent off to Todd Tobias (Circus Devils), where he fleshed out the songs with full studio instrumentation. The results are fairly muddled, and underwhelming to say the least.  The LP was limited to 1,000 copies.

SIDE A:
The Killers- 3  The original "Killers"! A rerecorded version was later the opening track on Pollard’s, Standard Gargoyle Decisions a year later. Tobias tries his damnedest to spruce this up with full instrumentation. End result; Pollard’s voice is buried under a hunk of shit.  Here though, “The Killers” is still a nifty little tune, full of drunken slurring and attitudinal pastiche.

Alibible-  2 Would later appear on Suitcase 2, this is a pretty go nowhere track that just sort of builds and goes into insanity blips and bloops by song's end.

Father is Good- 3  Simplistic, and fun enough to be listenable mildly catchy. But a bit of a stretch there.

Blood Witness- 1 Drug-addled, doom song. Plain bullshit that Tobias had to add screeching guitar and cymbal roles to in order to flesh out.

Late Night Scamerica- 3 Another Suitcase 2 song that was revamped for this LP, but fleshed out and fairly hooky. Verses are steady and light. Earthquake Glue sounding GBV type song.

Oh My Chosen One- 3 Pollard’s acoustic composition shines here, in that a.) it’s not that bad, sounding like a gem among the muck of the Suitcase songs, and b.) Tobias keeps it extremely sparse and appropriately lush with his instrumentation.  Cool.

Alabama Sunrise- 3 Short, guilty-pleasure catchy with some blue-color whiskey swagger. Stupid. Yes. Memorable. No.  Yea, I kind of like it.

Kiss You/Kill You- 4   The catchiest of songs on the record. No real vocal melody. Just simple chords with some absurd, but well done instrumentation by Tobias.


Side B:
Jesus the Clockwork- 3 Acoustic, strummer that doesn’t really go anywhere. Very little additions by Tobias here. Some subtle bass plucks. Sad and well sung, for an off-the-cuffer.

She’s Around- 1   Poor Royal Trux, hony-tonk stomp over proggy minor chords and such. Oooff. Throw away track seeks garbage can.

Disturbed- 1  Almost 3 minutes of farting around, with a simple 2 chord riff that sounds like a kid trying to kill it at his first guitar lesson.

Hello Forever- 1  Must be getting late in the tape because shit’s just falling apart.  Some go nowhere ideas, that have a hint of promise in them but fail to make any kind of solid turn to tune or feeling. Shambolic psych balladry.

Break Some Concentration- 2 Reminiscent of something off of Standard Gargoyle Decisions. Rocking acoustic song with snarling bravado. Unfortunately, it all takes place in on the tiniest of lo-fi stages, with none of the lo-fi charm. Just crappy overdubs over crummy recordings. Pretty boring.

Nation Gone Dry- 1 Moody yet awkwardly constructed song that lives somewhere between Snoozeville and Boredom City. What a shitty county to live in.

Frozen Vegetable Fiction- 3 Originally a demo for the Silverfish Trivia LP (which would then be shortened to an EP).  A sad, reflective song, that’s quiet, intimate, and somewhat gripping when held against most of this LP, especially the 2nd half. Sebadoh Freed Weed- era sounding.
Posted by Eric Truchan at 3:48 PM