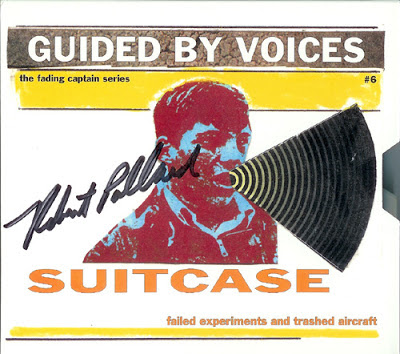 Following Y2K hysteria, and the mad descent into a new millennium, Robert Pollard reached new colossal heights with his prolific output, causing audiophiliac wet dreams, and joyous frustration.  By this time, Pollard had been tagged just about every term in the critical lexicon; genius, wunderkind, pop-virtuoso, wizard, genius, and well, basically he was heralded as a genius.

After instituting Pollard's imprint Fading Captain Series, a slew of side-projects began flooding the market. This followed an already impressive Guided by Voices output, firing on all cylinders around 1992's Propeller. Fading Captain Series had already introduced the world to Nightwalker, Lexo and the Leapers, and a one-off solo collaboration LP between Pollard and GBV guitarist Doug Gillard. The prodigy flag was steadily rising higher, albeit the flag of convolution was not far behind. The release of Suitcase is what seemed to permanently blur those lines.

Equal parts brilliant, and completely perplexing, Pollard unleashed 100 UNRELEASED songs onto the record buying public under the moniker Guided By Voices. Officially, Pollard had stomped his pop laden boot-print into the wet cement of the indie landscape. On paper, the concept is exceptionally daunting both for the listener, and the performer.

Much of Suitcase is taken from basement, lo-fi tapes (during a time when GBV had gone full studio). The material on the 4 disc set ranges from present day (2000) demos, to extended wobbly basement jams, to glory day '90s scrapped tracks, to pre-GBV recordings (the earliest of which dating back to 1975!). Another component of the box set which is particularly appealing to the masses of  fanboys is the addition of Pollard assigning fake band names to each individual track (sans Hazzard Hotrods). The collection also comes with a rather comprehensive booklet full of recording information and quotes from the press relating to Pollard's perceived greatness. The latter is somewhat nauseating at times, and occasionally wildly fulfilling.

Ultimately, the first Suitcase still proves to be a bit of a fans only affair. Having said that, it does provide the first tempting glimpse to dive head first down the rabbit hole.  For the casual fan, and the collector, Pollard released an abridged version in a limited run of 1000 vinyl copies.

Bottoms Up! (You Fantastic Bastard) - 1   Over 3 minutes of sharp, accented repetitive riffs with rambling lyrics that may have been created while recording this very song. No hook. No nothing. Sounds like a couple poor saps got stuck in the midst of ill sounding riff, and couldn't find their way out.

Tear It Out- 1  4 and a half fucking minutes! Oh boy. Sad and brittle. This song seems to have had some bright spots that never came to fruition. It’s slow and lonely, but could have been quite beautiful played out. Here it’s a painful version of what could have been a decent song.

Cinnamon Flavored Skulls- 1 About as idiotic as the title and lyrics. Stoned sailor commercial singalong with drum hits for 30 something seconds. It's a head-scratcher.

Bunco Men- 3 Minor chord Alien Lanes era sounding outtake . Pretty solid song with some ill-placed chord decisions to keep it from being anything memorable or even solid for an LP.

Bad and Rare-  2 This song was once rare and will always be bad.  Actually, wait. It’s really only kind of bad.  It’s piques my interest in that this is an acid soaked Maharisha-Beatles era inspired song, but in this case the sitar is replaced by Indian influenced guitar slides. Or, I don't know, it’s probably just crap.

Dorthy’s a Planet [original version]-  5 Would later appear on the Boston Spaceship’s The Planets are Blasted this is a completely stripped down demo version, that’s both haunting and beautiful with cracked vocals.

Pluto the Skate- 2 Also a Boston Spaceships song from Zero to 99, this original is not as psychedelically overblown as the later version, but still intriguing and bizarre. This is, perhaps, only interesting here after hearing the Boston Spaceships version.

Sabotage- 2  Same version that appears on the Hazzard Hotrods' Big Trouble LP.  Improvised band recording in a video store. Named after a Hitchcock film, this slow, grimy, no-fi tune is straight off the cuff and way too fucking long. Great background music for a shitty night.

Pink Drink- 5  What was going to be on the assembled but aborted Power of Suck LP, that later became Under the Bushes Under the Stars, has one of the most sweet and simple guitar riffs since “Queens of Cans and Jars.” Only guitar and vocals attribute to this track to create a sad, upbeat, and raw tune that is somehow undeniably listenable and whistleable.

James Riot- 3 Do the Collapse demo that never saw the light of day.  Full band, rocking mid-tempo number. This song has definitely got some power behind it, but doesn't really go anywhere or do too much. A lot of lyrics with little flair.

It’s Easy [original version]-  2 This would later appear on The Crawling Distance, a Pollard solo LP.  Just as unmemorable, but slightly sadder with a touch of lo-fi charm. Ehhh.  At least it’s short.

Dank Star Ground Control- 1  Bumbling bizarre, noise psychedelia. Basement space opera material left off of Bee Thousand thankfully.
Spring Tigers- 3 Outtake from 2 different aborted GBV LPs from the early ‘90s, this is a rather average full band effort that would have comfortably settled on Same Place The Fly Got Smashed.  Catchy little REM-riff in the middle. When you consider though that this “throw-away” stuff was being pumped out by some guy in a basement to absolutely no one, it is pretty awesome.

Born on Seaweed- 1 Sparse, guitar strums with Pollard spewing some poetic nightmare over it.  “It’s not exciting is it?” sings Pollard.  No, not really.  “So wait patiently.” Well I did. No thanks.

Flesh Ears From June- 2 Acoustic mid-tempo song with drums and out of tune, wistful Pollard vocals.  Great cigarette ravaged, throaty chorus by Pollard, but not much else is happening in this fun, light, rickety campfire tune.
Driving in the U.S. of A.- 1 Holy shit. Don’t drive through any part of any county while listening to this unless you wanna get sucked into a distorted blanket of bullshit.

My Big Day (3 Versions)-  1/1/2  Literally 3 different versions of the same song all packed into one digital track here. Originally intended for inclusion on an early unreleased GBV album. Now here they sit. As a whole, it’s painful and thoroughly boring. Separately, these versions are still really fucking boring too.

Have It Again- 1 Acoustic, intimate snippet. Nothing more.

Taco, Buffalo, Birddog, and Jesus- 3 Full band recording from ‘89.  Often considered by some to be one of the standouts here, and it is. Sounds like average Bee Thousand material but recorded at a time when they released muddled lo-fi LPs. Airy and poppy with fitting guitar leads.

Dig Dong Daddy (Is Back From the Bank)- 1 Just as silly as the title implies, and even shorter than the title itself.
Posted by Eric Truchan at 10:28 AM