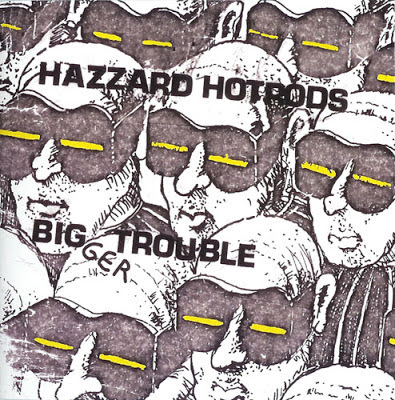 In 2000, the Fading Captain Series released an LP entitled Big Trouble by Hazzard Hotrods. It came on pink vinyl, was limited to 500, and sold out almost immediately, into Pollard collector obscurity.

In 2005, for better or worse, the LP was reissued on CD only, this time with 25 more minutes of music over the course of 7 unearthed tracks. The CD was entitled Bigger Trouble. The story behind this madness goes like this; Pollard and the gang made up a bunch of songs on the spot and record them with a boom-box or what not. All of the songs were supposedly recorded in a video store credited as MC Video, hence the good amount of song titles with movie names.

Honestly, most of, if not all of this is pretty damn unlistenable, and pretty confounding.   Below, actors who stared in the movies are listed because who cares?

Side A:
A Farewell to Arms-  Same song originally released on the first Suitcase collection. Reviewed there.  Directed by Charles Vidor, starring Rock Hudson.

Sabotage- 2 No Beastie Boys here, although Pollard did beat them in a pick-up game of basketball at Lollapalooza (or so the story goes). Slightly shorter version than the same version that was later released on Suitcase.  Directed by Alfred Hitchcock, starring Sylvia Sidney.

SIDE B:
Big Trouble- 2  Same version as the song on Suitcase, but nearly 3 minutes shorter. Directed by John Cassavetes, starring Peter Falk.

Runaway- 3  One of the most GBV sounding songs on the LP. Light lead guitar over melodic bass line, with mumbling Pollard. Most nostalgic feeling of the batch.

Get Dirty- 1  Put on your shit-kickers and “get dirty” with the boys. Stomp the floor, smash a mug, spit ‘bacco juice in a jug.

Solid Gold- 2  Quiet, lightly strummed easy listening no-fi. Complete with the lyrics “I didn’t need a beer, I thought that you were here,” and rhythmic Pollard coughing! Poetry is easy to master, kids.

CD ONLY BONUS TRACKS:
A Walk in the Sun- 2 Repetitive, cock rocker with a rather punk bassline. Directed by Lewis Milestone, starring Lloyd Bridges.

The Man Who Knew Too Much- 2  Slow, jangled jam alla Galaxie 500 (or just alla complete on-the spot nonsense). Directed by Alfred Hitchcock, starring Peter Lorre (in 1934), and James Stewart (in 1956).

A Star is Born- 2   Mid-tempo, post-punk, with semi-melodic vocal improvisation. Perfect for gazing upon the gray skies on a crummy day. Directed by George Cukor, starring Judy Garland.

Tell Me Why­-   2  Pretty GBV sounding, if it weren’t over 6 GD minutes! Decent jangly riff, and melodic bassline, but it just don’t end. Make it stop.

Rat Infested Motels of Dayton­ -  1 Unfortunately, this is not named after a Frank Zappa film 200 Motels. It is, however, only 9 seconds long. 9. seconds. Guitar plays, Pollard talks with a weird accent. Over. Shit. What?

Really Gonna Love Me Now- 1  Fast, punk bass line carries the tune with bashing drums. Guitars either don’t do much, do anything, or play out of tune crap over it. Pollard just repeats the title and bunch of time, sounding like a blind guy lost in a razor factory, while having a stroke.