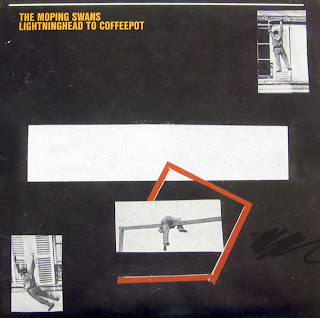 For this lone side-project release, Pollard teamed up with Greg Demos (GBV), Jim MacPherson (GBV, The Breeders), and Tony Conley (ex-Anacrusis, Pollard's first band in the late '70s).  Described as a full-on post-punk outfit, The EP remains the only release under The Moping Swans moniker to date. A short, and a rather inconstant outing to say the least.  Produced by long-time collaborator Todd Tobias (Circus Devils).

SIDE A:
Beaten By the Target- 4 The single unveiled publicly before the release of the EP, and labeled as post-punk, still kind of sounds like a Who Sell-Out thing to me. Can picture a few guitar arm spins. Easy catchy hook on this, and a promising start.

Shame Me No Further- 2 Jittery verses, with awkward crawling choruses with seemingly randomly placed accents. Forgettable, to say the least. And I will say the least.


SIDE B:
Look at Your Life- 3 Spacey, sprawling number full of moody synths, melodic bellowing, and more flapjacking around. Not terrible, but not very memorable either. Background music for a bad day.

Keep the Gutters Fresh- 2 Annoyingly simple hammer-on guitar riff played over and over. Quite bland and mildly irritating background music.