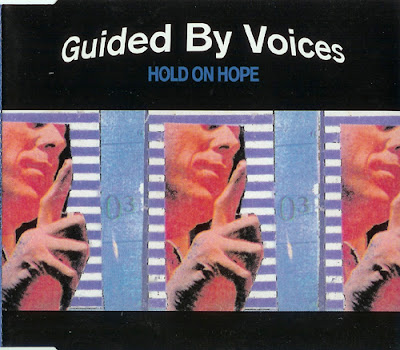 It seems like 4,000 different EPs, singles collections, and promos exist for "Hold on Hope" and everything little thing ever possibly thought up for the LP Do the Collapse. I could spend 4 lifetimes reviewing all of the "Hold on Hope" (radio remixes) that were released off that record, but I won't... yet.

But as reader Lucas Gelati pointed out, I had missed the review of the "Teenage FBI (DEMO)" exclusively released on this UK only promo for the LP.  I wrestled with even reviewing this, but decided what the hell... this is as legit as any "demo" released on any of the Suitcase collections. Without any further ado, possibly the last of the missed GBV officially released songs I have overlooked on this site?

Found another? Drop a line.

Teenage FBI (Demo)- 5 What do you know, it's "Teenage FBI"? Is this basically one of the best GBV songs ever. YES! Released on this UK only single along with "Hold on Hope" and "Perfect This Time," this remains the strange, lone place to hear this track. Is it essential? No. Is it the same as the version on Wish In One Hand...? Maddeningly, of course it's not. Pollard's vocals are WAY up in the mix, and it's a bit faster than the WIOH version, more comparable with the Do the Collapse version, minus those cloying synths. If anything, this MAY be the best version?