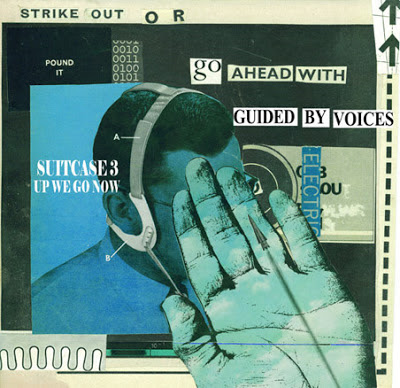 For a proper introduction to Suitcase 3: Up We Go Now, check here, on Disc 9.

Disc 11: Thou Shall Read the Wheel

Night Ears- 3  A supposed Elephant Jokes outtake.  Short and choppy rock song with a misplaced and even gimpy guitar solo.  Let's not forget the standard drunken baritone Pollard harmonies that top it off.

Amnesia- 3  Supposedly from the aborted 1984 Pissing in the Canal, “Amnesia” is a  harmonious singer/songwriter pop tune with brittle guitar jangle and barely audible drums. A little long for its own good. The somewhat hackneyed harmonies are actually quite a standout of the song.

Fly Away (Tommy Says)- 2  Off-the-cuff early GBV sounding Pollard harmony.  Acoustic down strokes ensue as the worn tape pops in and out of audibility. While this is not at all a groundbreaking song, it is quite charming and intimate.

Peace and Persecution- 3  This song/tape has the kind of lo-fi quality that perhaps even the snobbiest of lo-fi enthusiasts would approve. Sounds much like an '80s college-rock tune, but if filtered through a vortex of the absurd and ugly.  The quality's so poor, it's tough to make out, but it’s simply catchy and nonsensical in a good way. Pollard’s inaudible, and probably made up on the spot lyrics prove to be very fitting. Worth some repeated listens.

There Are Other Worlds- 4 Cold and sullen, slightly dated sounding track.  Full of cymbal flourishes and has a beefed up orchestral style background. One of the more ambitious and welcomed  tunes to be included in this collection.

It’s the Song-  1 Yes, it's the song. It's the worst song. Appears to be some old acoustic strums, that Pollard dubbed some drunken scat over years later. Worthless.

One Drop-  4  Slow burner of a  pop song. Sounds like early ‘90s GBV, but judging on sound quality alone, this appears to be an outtake from the late ‘80s lineup. Great song.

Mainstay- 2  Distant acoustic guitar and vocal demo that sounds like Pollard got trapped in a never-ending echo chamber, while trying to turn out some sad pop-punk.

Sixland- 4 Best use of harp in a GBV tune. Best use of harp in most any song, I imagine. Pretty high end on the production scale on this song. Apparently recorded at Cro-Mag studios and was soon after shelved. . Visceral harmonies drop in, choir style.  Quite a head sticking hook. Lush, and slightly hammed up but done very well and worth a listen.

How Bridges Fell-  1 The fact that this ramble is over 3 minutes is painfully mind boggling.  Sketch of some acoustic drivel, with a dash of Jandek.

A Kind of Love- 3  The live version of this song, played in ’84 is on the first Suitcase collection.  This two parter is slightly repetitive, and not quite as full as the live version.  Decent tune, especially  for being such an early Pollard tune.

Bad Whiskey- 1 Bad Whiskey = bad song.  Take a shot of whiskey if you plan on listening to this lifeless two minute acoustic demo.

Naked Believer (I Am)- 1 Elephant Jokes outtake. TERRIBLE wankery on a guitar and Pollard sounds like a dying hippo, if the hippo was a seasoned hobo. Yikes.

Out of the House- 3 A live number, This falls somewhere between ‘80s Ramones era rock and melodic punk pop. It’s a pretty decent endeavor into the world of palm mutes and buzzing riffs.

Grow- 1 Sometimes, on a Sunday morning, you pick up your guitar and hit some chords on the ol’string box and you may even mumble some slightly in-tune noises through the side of your lip.Usually you forget about those songs as soon as you put the guitar down. Usually, Pollard hits record.

Nothing So Hard­- 3 Raw and rather old sounding demo featuring Pollard and his trusty acoustic. Could have easily been recorded by the full band at some point. Decent hooks, and quality performance for an on the fly basement cut.

Piss Along You Bird- 5 This song is also included on the Rud Fins 7’’ under Pollard’s solo cannon. Originally recorded for his Silverfish Trivia. Based on how bad that EP is, it’s a wonder why he left this steady, melodic high-leg kicker off that EP. Puzzling.

300 Birds (Quota)- 2 Lo-fi drum machine clicks along as a flange soaked guitar bellows out and Pollard moans, probably sometime in the ‘80s. Could be an unused Acid Ranch tune. If you got stoned and just woke up from a nap this is your who-gives-a-shit-song to start the day.

Fireking Says No Cheating- 3 Could be a Circus Devils outtake.  The song is static laced, unsettling, and begins to fade out prematurely.  Pretty cool tune.

Poison Shop- 4 Snippet sketch on a brittle sounding acoustic in which both the guitar and tape sound like they're about to split apart.

Trader Vic- 5  Vintage GBV perfection!  Was to appear on the aborted Power of Suck LP from ’95.  Sounds like Alien Lanes material. Powerful and melancholic nostalgic.  Buzzing guitar and desperate vocals. Would have been great to hear the full band version.

Smothered in Hugs [4 track version]-  3 Who would have thought that the stoned, guitar blitz charm of the Bee Thousand version started out as this freaky peyote drum pounding depression session?  Definitely different, but a fascinating and intriguing early demo.

Dibble 2- 1  Why?  Pollard says “Yeah” then someone says “one” then a guitar plays for a second. Then the whole thing repeats. This is 17 seconds I’ll never get back. This adds up to many lost seconds when you're a Pollard junkie and give repeated listens to even his worst songs. I CAN'T HELP IT!


Huffman Prairie Flying Parade [demo]-  5 The demo version of the very best song on Half-Smiles of the Decomposed.  Helps showcase why that song was such a great throwback GBV song when it  that appeared on a later GBV LP. It was already this fucking awesome as just a "shit" demo. This was most likely recorded in the mid to late ‘90s. Perfect.
Posted by Eric Truchan at 10:57 AM