For some godforsaken make-the-collector-sweat reason, Robert Pollard stuffed one ultra elusive track into the depths of record collecting hell. And here it is. Such is the case, that on this site, as I boasted to have commented on all Pollard studio tracks, little did I realize I neglected ONE single track. Hell, maybe there's a few more out there, but I think the lone track under the Kuda Labranche moniker covers it!

The fact that a song by Pollard's Kuda Labranche existed did not escape me. In fact, I've stumbled upon a picture of the cover to Tractor Tunes Volume 1 a few times online. However, the track listed online for the compilation was "My Big Day." Lord knows I didn't need to hear this, as all 3 versions were released on Guided by Voices' Suitcase: Failed Experiments and Trashed Aircraft. Surely, this Kuda Labranche track HAD to be one of the ones included. BUT NO!.... it was not. (turns out I also ignored the comment by one Lucas Gelati in 2016 informing me "There's yet another version of "My Big Day", credited to Kuda Labranche that was released on "Tractor Tunes, Volume 1". It's the better of the four in my opinion."

And I'll be damned. That IS the case! Presented here is the long lost review to "My Big Day" (the 4th version known to exist).  Released on a CD included with the Fresh Cow Pie zine, this run is supposedly limited to 500 copies and includes a track from GBV alumn Mitch Mitchell's Terrifying Experience.

Happy hunting for this one! 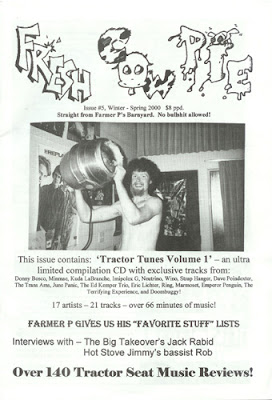 My Big Day [Version 4]-  4 Only to be found on this obscure compilation included with zine, Pollard releases the BEST version of this generally lackluster song. The 3 versions released as one LONG track on Suitcase is enough to make you drool out the side of your skull with boredom. Here, this sounds like a GBV full studio outtake winner that got away. The layered vocal harmonies alone carry this. The crunch and swirl of the guitars enter psych rock territory. All at a minute and a half, this version KILLS!