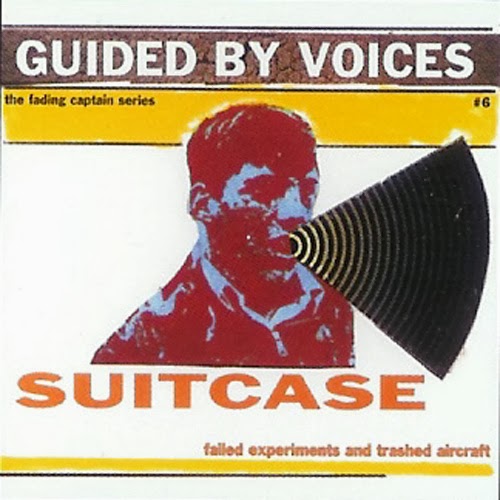 For an intro to Suitcase: Failed Experiment and Trash Aircraft check here, on Disc 1.

Long Way to Run-  5 Super happy, laid back, glimmering chord rocker with perfectly sweet melodies. Sandbox era recording.  Why this was left off that solid LP is beyond me.

Settlement Down-  3 Heavy hitting, moody, post-rock song. Toms thunder away under dissonant guitar chords. Surreal and gloomy, but an interesting and refreshing break from formula.

A Kind of Love [Live at Gilly’s; Dayton OH ‘84]-  3 Live recording of what would later show up on Suitcase 3 of all places.  Actually sounds like a later GBV song in it’s melody and jangle opening.  Fairly solid hooks in the verse that show how damn easy Pollard can make it seem, even if there was a pretty annoying bass line supporting it.

Meddle [Orginial Version]-  3 This would later show up on the Boston Spaceship’s Zero to 99 LP.  Eerier than that version mainly based on the sparseness of the track.  Stream of lyrics in the verses are breezy and slyly ominous within the choral hook.

Big Trouble- Same song as on Hazzard Hotrods’ LP Big Trouble. You can read the review there.

A Good Circuitry Soldier [Original Version]- 4 Later released on the Boston Spaceship’s Zero to 99 LP as the closer. This one’s an acoustic guitar and vocals only affair, and those vocals are much better. This version is not convoluted by production and proves to be short, simple, and intimate in a way the Boston Spaceship’s version fails to capture.

Devil Doll- 1  Strummed chords get bent while Pollard does some They Might Be Giants dial-a-song voice over.

Pantherz [Demo]- 3  Originally supposed to open what was the LP The Power of Suck before being changed to Under the Bushes, Under the Stars, “Pantherz” is a pretty standard GBV song from that time. Buzzing chords, mid-tempo with simple but effective hooks.

Cocaine Jane- 4 Catchy little acoustic song. The melody is reminiscent of a billion other GBV songs, and that is not a complaint. Fun and short.

Exploding Anthills [Original Version]-  2 Guess what?  This would later be on the Boston Spaceships Zero to 99 LP!!! See a pattern here?  In this case, this version is pretty crappy.  The warbled, tremolo vocals are nothing but distracting.

Perch Warble- 4 Upbeat, and poppy shit-fi recording.  Unfortunately, the warble of the vocal once again diverts your attention from an otherwise killer, short song.

What Are We Coming Up To?- 1  Boring song that sounds about as dull as the medley before it.

Scissors and the Clay Ox (In)- 4 Repetitive, three chord early ‘60s Herman’s Hermits rip-off garage jam from the dusty bin of a record fair.  So incredibly simple, and un-GBV like but it’s undeniably infectious.

Cody’s Antler- 1 Complete drab and disconsolate instrumental noodling from ‘93 era GBV. This manages to feature both Tobin Sprout and Mitch Mitchell and somehow still suck in an incredible 2 and a half minutes.

Once in a While- 4  OH MY GOD, what a great little vocal melody that just sneaks up on you for a few short seconds.  Such a great hidden acoustic, double vocaled jam hidden in the annals of the suitcase. Incredibly sad. Pollard’s lost “In My Life," Beatles moment.

Buzzards and Dreadful Crows [Different Version]- 1 Classic rocker from Bee Thousand was originally conceived as this maniacal, I-Can’t-Believe-I’m-So-Drunk-and-Still-awake, howling piece of shit over the slow chug of a guitar? How this was the origin of such a great song is again one of Pollard's great mysteries.

Carnival at the Morning School- 3 Some of Pollard's most mundane throwaways, at their core, have still broken through with a quick twist of melody, or surprising vocal turn that makes the track worth hearing. This outtake is a perfect example of that.

Cruise [Different Version]-  4 “Cruise”was released in a different form under the Pollard moniker Freedom Cruise on the split 7'' w/ Nightwalker. This version's a dizzying, and subtly effective psych rocker. Stoner dirge, with psych-hope vocals. Ultimately, this proves to be the better version

Gayle- 1 Pollard strums guitar. Then Mitch Mitchell and him wail “Gayle, Gimme some of your loving,” over and over in variations.   Sounds like “Death Trot and Warlock Riding a Rooster.”  But this is somehow even stupider.

Gift- 1  Someone accidentally hit the record button after a noisy jam and cheering session. Then a pulsating post-punk track was improvised while the tape was still rolling.  Unbelievable. (sigh)....

The Flying Party-  3 Sprout/Pollard composition with the inimitable Jim Greer on organ.  Surreal, short, and sad.  How about that for alliteration?

Trashed Aircraft- 2  Aggressive sketch of a song with mildly hooky and distant Pollard melodies. Later tested to be added to Do the Collapse after 6 years in the Suitcase, but was vetoed off that album.