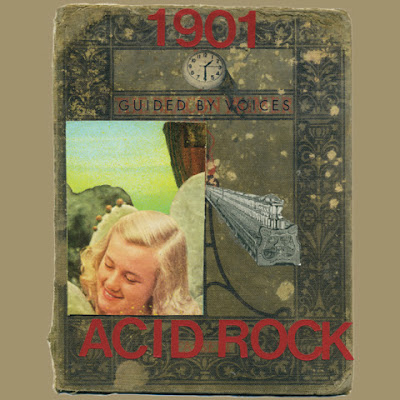 On March 29, 2019, round two of the GBV EP saga continued. 3 months removed from the first two entries in the quintet, 1901 Acid Rock and Umlaut Over the Ozone hit stores. Like the first 2, each EP was pressed on black wax and limited to 1000.

And like the first two, each song featured the current line-up firing off song snippet shots from the hip. No place is this quality of material greater in the collection that 1901 Acid Rock, as if vying for greatest GBV EP of all-time!

Each of these songs were collected less than a month later on the Warp and Woof  LP.

SIDE A:
Dead Liquor Store- 5 Sounding like some mash up of a Sega Genesis game meets caffeinated punk track, the song is tough not to root for through gritted teeth and jittery eyeballs. Between Kevin March's high tension drumming, Gillard and Bare's rope-taught guitar stabs, and Shue's warbling, see-saw bass pummels, it's pure aural gratification. Harkens back to Space Gun's impeccable "Daily Getups" a bit. The tacked on swooning end part of "might get a taste of you, might get a taste of me," seals the deal as new GBV classic.

Cools Jewels and Aprons- 5 Perhaps the single greatest GBV throwback to the days of your since anything off Cool Planet or Motivational Jumpsuit. This is straight from Under the Bushes Under the Stars era. A to-die-for descending guitar pattern in the choruses, and short-as-shit verses complete with two-part harmony. At a hair over a minute long, this is Pollard gold. Amazing.

Down the Island- 4 Is it the thunderstorm effects in the background? Is it the reverb-set-to-11 effect on the vocals? The harpsichord keyboard noodling? Whatever the case, this skeletal tune gets better with every listen. A real for-fans-only track, perhaps. Equal parts haunting, humid, and hopeful in this understated Pollard ballad.

SIDE B:
My Dog Surprise- 2 Musically, this could've fit somewhere buried in Universal Truths and Cycles era, or perhaps a leftover from ZOC. A mid-tempo number lagging in much to note, only dragged down by Pollard's horrid vocal posturing. Still not sure if it's a dog names "Surprise," or as in giving one a "dog surprise." I'm not sure which is worse? A lumbering affair that sticks in your brain for the wrong reasons.

Even Next- 4 Time to fly the Pollard ballad flag once more. Somewhere between the timeless turning wheels of a grandfather clock and a far off nursery rhyme, you'll find this foggy dream sequence of a lullaby waiting for you. Eventually the wafting tempo  gives way to steadier Kevin March drum part, anchored by Gillard's added strings. Only wish the blown-out ending could last one more measure. All the more reason to make you revisit.

Time Remains In Central Position- 4 During the recording of Mag Earwhig! and Do the Collapse, maybe... just maybe... Pollard penned this tune, and resurrected it from the boombox tapes. One can dream, but this is vintage mid to late 90s.  Takes its time to unfold at mid-tempo, feeling like it swells, but remains on first raising auto pilot.