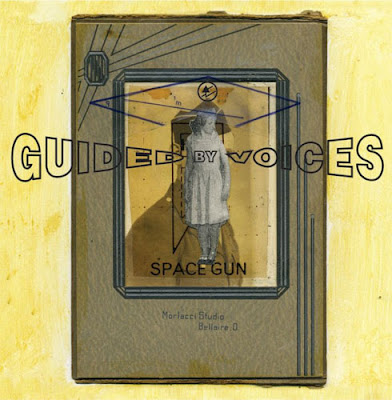 The third studio offering from the new and improved, fully fleshed powerhouse line-up that is the re-reunited Guided by Voices!  Space Gun is further studio progression in the new life that pulsates through the ultimate band, keeping it in motion; behold the mighty Guided by Voices. Back from their possibly best sounding studio LP, How Do You Spell Heaven, the newest LP is another exercise in high kicks, and top notch production courtesy of recording engineer Travis Harrison. Harrison was also at the helm for the sonic bombast of ESP Ohio's Starting Point... along with much of August By Cake.

Originally rumored to be a double LP back in its mixing stages,  Space Gun finally arrived as a compact, more cohesive 15 track record in late March 2018. Said to be the only studio LP of 2018, the ever prolific GBV seemed to be putting their money where their mouths are, doubling down on this one and done affair for 2018. And boy do they deliver!

Also, this LP features perhaps the most un-Pollard titles ever collected on one record. I mean, check some of these titles out... "That's Good," "Blink Blank," "I Love Kangaroos"??? What a bunch of throwaway titles, but damn... such is not the case behind the meat of these songs. Backed again by Doug Gillard, Bobby Bare Jr., Mark Shue, and Kevin March, the band's sounding younger, full of purpose, ready to go toe to toe with any naysayers or ship-jumpers.  Pollard, like the last couple records, soars in the vocal department, layering on harmonies, and high wire acts from start to finish.

A lot of blind praise often goes into the Pollard catalog, longtime fans and newcomers rightfully blown away by the  magnitude of material released by the man at the helm. With Space Gun all praise is deserved. I recall reading a review of a fan who had an early copy, stating "Every song could be a single!" In my naivety, I thought, "here we go again. Really, not one dud?" However, such a brash statement about Space Gun is not wrong. If this truly stands as the only GBV record of 2018, what a statement it is. One of the all-time great GBV recordings, and a sign that Pollard's well is not only far from dry, but perhaps flooding as we speak.

Ladies and Gentlemen, YOU ARE THE SPACE GUN!

SIDE A:
Space Gun- 5 I've said it on numerous LP reviews over this site, but DAMN does Pollard know how to open a record! In fact, out of the 26 GBV LPs (yes, Tonics and Twisted Chasers counts), the opening track holds an average rating of 4.3 Hmmm, how about that useless information? This opener is no exception. Perhaps the only album in history to open with the sounds of an automatic bathroom towel dispenser, the titular track swells with hypnotic guitar stabs before catapulting the listener into the stratosphere. Huge production, gigantic airy hooks. Anthemic to no end! At over 4 minutes, the song feels repeatable and effortless. It's all so familiar, but wholly triumphant and fresh! A grand statement.

Colonel Paper- 5 While the opener was a breezier epic affair, track 2 is a taught stomp rocker that nearly falls into pastiche territory. What almost teeters into the cock-rock zone thankfully doesn't. Tightly wound verses blow up into fist pounding choruses worthy of a raised beer glass. Lyrics, somewhat questionable, but from Gillard's leads to the bass plodding to Pollard's vocals, it's perfect.

King Flute- 4 A proggier, airier feel. Sounds like it could've fit prominently on How Do You Spell Heaven. Kevin March shows off his drum fills throughout this mystic tale of a tune. Unlike some of these "deserves repeated listen" mystic Pollard tracks, this is straight and to the point, full of plenty "holy shit" vocal moments that only grow more infectious over time. To the point too!

Ark Technician- 5 Goddamn, this is downright gorgeous.  Takes us back to late '90s/early '00s GBV. A simple tune brought to life by the jangly guitar interplay. Wonderfully placed bridge that both offsets the song, takes a turn for the melancholy, and ends on a joyous note. A subtly beautiful tune that only gets better with ever spin.

See My Field- 5 Perhaps the best production on any GBV song ever? Not overproduced, but the second single released off Space Gun is grandiose, overblown, and irresistible. Stadium ready, appropriate for a raised fist and belted singalong or two. The off-kilter stereo guitar leads are the center-piece of this driving, mini-epic. Again, the lyrics are a drag, but Pollard delivers with such conviction that who gives a damn. This song could be about Kangaroos for all I care. Oh wait, that's later.

Liars' Box- 4 Holding things back for a minute... Take a breath. They can't all be epics or Space Gun might kill us all. But, do not be fooled! This is one that creeps up on you. The first part of this song is a post-punk, moody plodder that could've passed as a more "GBV-like" Circus Devils' song. The hard-rock middle is average, but welcomed. The ending of "summon of a glass to a sad sad heaven," as Gillard fires off those leads... well now.  I've died and gone to heaven (how do you spell that).

Blink Blank- 4  Post-punk as all hell. Another industrial tinged piece that could've found its way onto a late-period GBV record of the early aughts. In other hands, this may not have come to such successful fruition, but Travis Harrison's production brings this to life. Pollard's backing melody, the ice-cold rhythmic strings... far from the main-stream hit of the record but well worth the time. Forget the incredibly stupid title, "I lost an umbrella looking for you in a shit storm," is Pulitzer-worthy.

SIDE B:
Daily Get Ups- 5 It's said that The Strokes once threw their tape up on stage at a GBV show many moons ago. Pollard liked it and eventually The Strokes and GBV played some shows and shot a Family Feud style video together. Well, I'll be, if this isn't the Strokes' leads that got away.... Albert Hammond Jr. must be having his own stroke of excitement. But HOLY SHIT, is this where it's at. You know you've won when the well-placed-hand-claps get you smiling. Short and sweet. Poignant and full of life.

Hudson Rake- 4 A stop-starter with late-night drinking/late-night show ballad vocals from Pollard. This feels like the curtains are about the be drawn on another day/show and out comes "Hudson Rake." The song builds into the oddly cryptic "there was a terrible accident last night. Am I Am I dead?"  Whoa! It works so wonderfully in the context it lifts this almost mundane song into near greatness.

Sport Component National- 5 Guided by Voices just can't resist some sawed-in-half magician song on their record full of comprising fidelities and bit pieces. The song is mainly carried by the Monkees-esque "Getting Ready Getting Ready To RUN," vocal piece. A mid-fi Pollard moment pops in, along with a building short snippet all leading to the guitar stabbing that takes us out into one of the most grand moments in the discography. Raise the flag. Raise the glass. GBV!

I Love Kangaroos- 4 A song so fay and fragile in its pop simplicity, it's almost nauseating.  In its approach it's almost easy to miss what a great tune this is. Reminiscent of some of the Tobias produced mid-00's solo records, but with actual arresting hooks. The lyrics are so dumb, it's okay if you take a black sharpie through your lyrics sheet. But, wow!, damn if this "wimpy" prominently acoustic, child-like singalong about kangaroos doesn't get me every time.

Grey Spat Matters- 4 This short tune almost sneaks right the hell up on you. Clanging from guitar to drums, it's a one dimensional piece with some dry Pollard vocal delivery. Regardless, it's the perfect simplistic combination. A true example of Pollard/band/production all coming together to make a simple demo pop. And Pop is as pop does.

That's Good- 5 Pollard's written some heart-breakers and nostalgic ballads over the years. This is one of the best. For everyone who took a steamy dump on "Hold on Hope," this could've been what he was trying to reach, and nearly did with that song. But putting comparisons on the back burner, this is an incredibly slow building tune for the times you need to play the memories back in slow motion. Need a moment for your nostalgia of nearly any moment ever lived? Check in with "That's Good."

Flight Advantage- 2 A straight forward tune at best. The one sour spot on the record. It's not particularly bad. It's just not particularly memorable. On top of that, Pollard adopts a vocal styling that sounds like he's on the verge of blowing chunks throughout. Were the vocals recorded while walking on a balance beam?

Evolution Circus- 4 One slow burner of a closer. After an immediate punch of an LPs worth of songs, "Evolution Circus" requires a bit of work. You can almost see the smoke machine going off. Kevin March brings the tom rolls as the band builds... eventually it's all bogs down into below mid-tempo plod and gray-sky-jangle before finishing up with the leg-kick worthy "get on get on get up" ending. The truest track of worthy-of-repeated listenings on the LP, and a fantastically understated close to a monumental record in the canon.