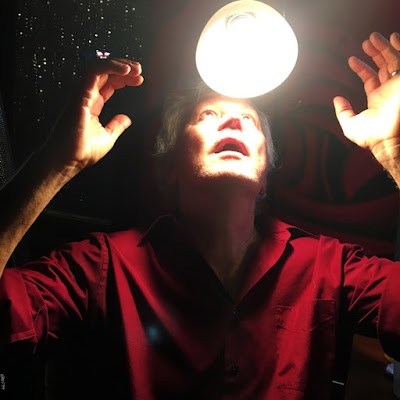 We arrive at ROCK 101, or so says all the press for Guided By Voices ever expanding discography. Hot off the heels of the fan-lauded August By Cake, the famed 100th LP, Pollard and gang wasted little time dropping a follow-up in the hands of the public; the 2nd installment of 2017.

Unlike, August By Cake, the follow-up is far less scattershot in terms of ideas, fidelity, and contributions. Absent from this are those (great) "solo" tracks from other members of the new and improved quintet. However, as far as a band effort, this is about as cohesive as GBV has sounded since... maybe ever? Bobby Bare Jr. and Doug Gillard play off each other like life long bandmates. The rhythm section of Mark Shue and a Kevin March is simply to die for. GBV sounds stadium ready, locked in at every turn. To his credit, Pollard also hasn't sounded this surefooted in years. Vocally, Pollard is on, rarely stumbling, new life alive in the pipes, even after 100 albums, including all the golden nugget EPs (and some straight poopers) in between.

A solid LP, the whole affair recalls the sound of late period GBV, ala Universal Truths and Cycles or say, Earthquake Glue. There's a "proggier" slant to a lot of these songs; starts and stops, mid-song shifts, ebbing dynamics. Yet, in between it all, Pollard weaves plenty of sneaky, and sometimes blatant, melodies throughout the 15 tracks (the shortest GBV track listing since 2004's Half Smiles of the Decomposed).  Recorded and mastered by Travis Harrison, the man behind the boards to most of ABC and ESP Ohio's Starting Point of the Royal Cyclopean LP, this seems perhaps the slickest GBV record since... oh I don't know... Isolation Drills? A new chapter is unfolding in the GBV universe. Keep the ship steady, and all aboard!

SIDE A:
The Birthday Democrats- 5 If there's one thing Pollard knows how to do, it's open a goddamn record on a high note. Rarely has he dropped the ball on this, and "The Birthday Democrats" is no exception. From Gillard's stabbing(almost annoyingly so), guitar lead, to the soaring vocals, this 2 minute chunk of powerhouse pop bliss kicks things off steady and ready for a revisit.

King 007- 3 Here's where some of the more "prog" elements of the record come in. The band weaves 2 separate, almost unrelated parts together shifting from acoustic, bass-walkin, easy listening that sounds like a missing piece from Gringo, to a nearly straight lift from mid '70s The Who, before dropping back to an oddly catchy GBV-familiar part. It's a dizzying, but mostly rewarding cut.

Boy W- 2  What now is all this nonsense with electronic drum sampling? Not a bad tune, but the production choice, while interesting and perhaps risky, really takes away from the song. Whole thing falls flat, from average-at-best Pollardian tune to those razor guitar tones. I don't know, this is like The Groillaz do Dayton.

Steppenwolf Mausoleum- 4 Step into the bleakness and let this one bleed through you slowly. Dank acoustic plucking and ambient squeaks play out as Pollard delivers a haunting melody on top. Eventually, the song kicks in, AND heavily. Solid into the declarative "chorus" of sorts, and back again to the bleak. Multifaceted all around, complete with piano accompanied outro. A grower for sure, but with near boundless rewards.

Cretinous Number Ones- 4 Upwardly propulsive, thanks in part to Kevin March's drum stomp. Pollard pens one flowing, catchy melody around it, building up to the new instant fan favorite chant of "I dream of drinking!" Short, sweet, and powerful.

They Fall Silent- 3 A short, haunting gap track in between two powerhouse tracks on the record. Pollard croons through road worn vocal chords in an almost nursery rhyme cadence over bare acoustic strums. So cold, it might fog your glasses. Under a minute, and perfect placement in the LP.

Diver Dan- 5 Perhaps the shining moment of the record. "Diver Dan" is a no bullshit, straight forward GBV rocker, complete with familiar start-stop moments and tastefully doubled vocals. If Pollard put this on Suitcase 5 one day and said this was like a lost Universal Truths... or Isolation Drills track, it'd be hard to say otherwise. Hit repeat, and add it to your latest best-of mix.

How To Murder a Man [In 3 Acts]- 3 On ABC, we got "Substitute 11." On this LP, we get Pollard's latest "rock opera" type track, something he's tackled often on Circus Devils LPs, among others. Yes, this song is split into 3 SHORT acts, as the whole thing is just over two minutes. At first eerily catchy subtle melodies exploding into rock bombast, lead out by proggier meandering. A bit of a mess, but rewards repeated listens.

SIDE B:
Pearly Gates Smoke Machine- 2 Flip over the record and yes... what a cool mid-tempo rock track, complete with killer Doug Gillard leads! Can hardly wait to hear what Pollard sings over this... Any minute now.. Wait for it.... Oh this is gonna be my new favorite GBV song!  Gillard is on fire here! C'mon Bob, hit 'em with that killer melody. Gillard's guitar lines speak volumes, hooky in their own right. Just drop in anytime Bob, not too late. Gillard's fret board is literally smoking through my headphones. Oh wait... it's over? And at 4 minutes?!!!? An instrumental... What in the world just happened and why? Soooooo good, but so what? Look, it's a damn fine instrumental but can't help feel this was one that got away.

Tenth Century- 3 Acoustic opening jangles about. Pollard eventually makes a vocal appearance one song too late. A cold but airy gap track of sorts. Sounds more suited as Pollard solo track from the mid-00s, but the full band lead out, and speed up, is pure late era GBV gold that saves the track!

How Do You Spell Heaven- 2 Pollard opens this, warbling vocals shouting about in the mix. Eventually the song kicks into a fairly standard GBV/Pollard solo fair. Feels like a grower that just won't grow.  It's like a sugar cookie or vanilla ice cream. Not bad, but how can you recommend this to anyone, really?

Paper Cutz- 3 A driving, oddly catchy song, if not somewhat annoyingly so. One of those tracks where the verses are near perfect and the chorus is almost too cloying. But not as cloying as using a "z" to spell "Cutz." What, is this a 90s brand of scissors marketed to Gen Xers? Also, the lyrics to this really stink in places. HOWEVER! For all its faults, it's hard to get out of your head, and you might not mind it taking up residence.

Low Flying Perfection- 4 One can picture Pollard alone on stage singing this, hand raised to the heavens as the subdued guitar jangle leads us in. Eventually the band kicks in to low momentum, lighter waving material truly carried by Pollard's vocal showing. In times of contemplation, turn to this.

Nothing Gets You Real- 4 A nice little Pollard pop nugget buried near the end of the LP. However, I'm slightly detracted by how light and "little" this song feels on a whole. It's a paper thin, acoustically fay pop rocker that feels like it could've benefited from a little more drive. Still, hooky as all heck, and one you can hum while the world fall down around ya. Pollard displays just how seemingly easy it is to write a killer pop song.

Just To Show You- 5 The lone single released for the LP closes out ROCK 101! A waltzing, weepy eyed rocker. It's a song for the end of night; tie undone, eyes bloodshot, no one left in the room. Sad, yet empowering. Overall, sounds somewhat thin, but the lackadaisical melody and the harmonies slowly take hold, and the nuances grow with very listen. Seriously, first time I heard it, I hated it. Now look at me... A success in listening beyond your wildest dreams. Now where did I put that Cash Rivers 7''?