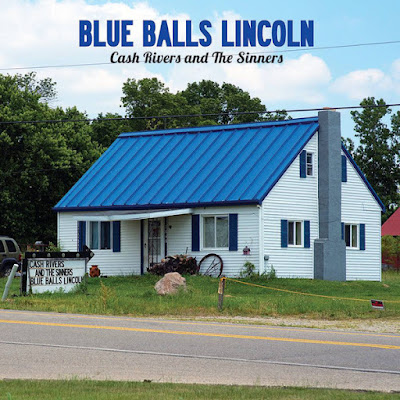 Just when you thought it was safe to let your daughters out of the house, here comes another Cash Rivers’ release! This time, forget about it being a solo act, because the whole shebang is credit to Cash River and the Sinners. That's right! Ol' Cash got himself a nasty hangover and a full fledged band! Backed by the likes of Harry Covair and Dukey Rodgers, this a record no true country fan is soon to forget!

In actuality, as you may have guessed from being on this goddamn site in the first place, Robert Pollard is at his old funny self again. One of the unlikeliest of side project in his cannon to reappear, like The Cubs winning the World Series, it has happened. Unlike the 17 song 7'' debut, this full length is a fully realized country twang record with help from GBV bandmates Doug Gillard, Bobby Bare Jr with guest spots from such famous musicians as drum machine!

While the absurdity, spontaneity, and sheer audacious nature of the first 7'' made it pure novelty gold in the most absurd sense, this feels like the slogged down 23 minute follow-up no one was clambering for. While She Laughed I Left, had numerous twists and comedic turns (from vocally delivery, to title choices), Blue Balls Lincoln feels forced. The vocals, and "lyrics," feel as if they were recorded in similar fashion; back stage, drinking, trying to make the gang laugh. Hell, these might be from the same "sessions" using that term incredibly loosely. However, She Laughed I Left may have used the wealth of quality material if that was the case. Again, "quality".... is used... loosely.

The whole thing is in good fun, vocals recorded to cell phone and music added after the fact.  Released as a Rockathon Records website exclusive, this stack of blue wax sold out in a single day. Worth tracking down? For fans and completists only.

SIDE A:
Bloody Mustard- 2 An honest to God real country tune here! Wow, that banjo playing... That squealing fiddle. Sounds like some babbling in the background. Then the song cuts out, and Pollard sneers "Blllooodddy Mustard." Yup, that sums it up. At one minute long, this is almost a downright epic on this LP!

70 Year Old Lady- 2 More of the straight-to-cellphone feel from the 7'' is present on this. It sounds like Pollard recorded this backstage and then Gillard added guitar post drunken backstage romp. Either way, bland, and low on the chuckle scale.

Bobby Bare, Jr.- 3 An ode to songwriter, and GBV guitarist, Bobby Bare Jr. Son of famed country musician, Bobby Bare. This song is equally ridiculous yet played pretty straightforward; A redneck hook sung so infectiously it may cause an ear infection.

Candy Cigarettes and Kiddy Cocktails- 3 Another blink and you'll miss it track. Maybe the funniest one of the set thus far, but a stretch.

Crooked Balls- 3 Finally, a little life to this one. Bring a smile to this curmudgeon's face, here. Zero on the clever scale, but gets points for spot on delivery.

Didn't Daddy Give Ya- 3 Probably the best "song" on the record... practically catchy, even from the vocally delivery. The new square dance classic?

Excuse Me Baby- 2 Pointless... Wake me up when "Gas Station Hero" starts.

Gas Station Hero- 1 Oh okay, that was quick. I'm up. Pollard repeats the title a couple times, drunkenly bass scats, but nothing materializes.

Glad Girls- 3 A funny attempt at turning the GBV classic into a late night, throaty country ballad that oddly works.

SIDE B:
Goddamn Lookit My Phone Got Wet- 4  The single for the record is nearly 2 minutes of country fiddling about, the real musical showcase for the musicians here. The absurdity of Pollard's one line getting repeated through the entire song is gold!

Night Slaves- 3 This one just sort of sounds like a GBV song that escaped finding it's way onto a Suitcase collection. Not a bad Space Gun outtake? Peddle steel placed over for "country" effect.

Rock Rock Rock- 1 Pollard chants the title a bunch, as the song builds into a rousing group effort, but so what?

Squeeze Bottle Blues- 4 haha... The closest this comes to the genius of She Laughed I Left. 30 seconds... genius.

Stab You In the Heart With Rock and Roll- 1 Pollard sings in a faux Springsteen like voice, as the guitars prick and poke about. At 1:32, it's about 1:32 joyless seconds too long.

The Monkey- 1 19 seconds of pure bullshit.

Man With Clogs- 3 Funny enough... the looped laughing and lines is enough to help bust your gut.

Nuttin' Without You- 2 Bob Dylan from the '80s, is that you? Instrumentally that is. Vocally, love the fidelity changes as the recordings pop in and out. But overall... totally forgettable.
Posted by Eric Truchan at 8:22 AM