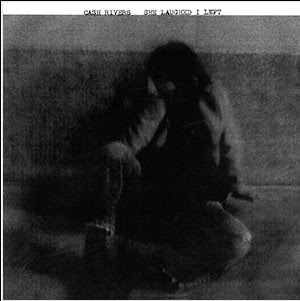 As of this posting, there are 2 Robert Pollard solo releases I have debated posting/reviewing in some sort of fashion; his 2 comedy LPs. If you're reading this review, there's a good chance you've dug deep enough and are somewhat informed that Robert Pollard has released comedy LPs, titled Relaxation of the Asshole and Meet the King: Asshole 2. Both titles, released on the fictional Yuk Yuk Motherfucker Records are novelty, stage banter LPs for a late night spin, but mostly just to get you thinking "I can't believe he released this," some how making you laugh harder.

With all that bullshit said, welcome to Yuk Yuk Motherfucker Records VOLUME 3. Cash Rivers is the latest, and greatest (?) in Pollard approved fake monikers. It's a 45 RPM 7'' packed with 17 "songs." Reportedly recorded on a cell phone, this is equal parts country, comedy, novelty record. Essentially, it's Pollard riffing fake titles, or lines that would become the title, possibly backstage to the chagrin of those lucky enough to be sipping beers with the Wizard of Northridge.

Is this ridiculous? 100%. However, this tiny glimpse of a novelty is a must have for drunken wit of a musical genius, who can be as funny as he is prodigious. Cash Rivers is not a must have for anyone, but everyone should hear it. Acoustic guitar, Uncle Bob vocals on display, and the cackling of those lucky enough to have witnessed this "recording session."

500 copies released through Rockathon Records only. Not available in stores. No download code.

Back on Cholesterol- 4 Pollard sings the title. Catchy and a knee slapper.

Bring Your Nasty Ass Home- 4 The twangiest of the lot so far. Trailer lovin' good times.

Buckets and Shots- 3 Sneeze and you'll miss it bullshit. LOLzzzzzzzz

Cocaine On My Way Home From Church-5  Greatest title made into the saddest country song ever?

Diapers To Panties- 5  Instant classic. Can't get it out of my head, brining tears of joy wherever I may roam. Nearly a real song at about 30 seconds.

Drinkin' With Abraham Lincoln- 4 Pollard rhymes the title with the first line. HA!

I Can't Blame the Rain- 1 So short, and not funny so it sucks!!! hahaha

SIDE B:
I Had To Pay For My Own Birthday Party- 4 It's sad having to pay for one's own birthday party. Thankfully Pollard immortalized it in song.

My Good Friends From Brooklyn- 5 Hank Williams move over. So much is sad (said?) in this short tale.

My Next Beer Will Be In Heaven- 5 Goddamn doctor tells you your liver is drying up... So sad, but true.

On My Last Day of Freedom- 5 Perfection

She's Too Old For Trick Or Treat- 2 Pollard declares he's Cash Rivers on this. 3 strums that don't rhyme. Weeeeemm-Wommmmmm

She Stole My Man Panties-  2 "Diapers to Panties" the "reprise" version? Valiant effort.

Summertime Santa Clause- 3 Another rockin' good time for the holidays, or a beach party in a drunken haze. Or perfect when coming out of your blackout stage during the holidays or on a beach.

Wrong Way Road- 2 And so it unfortunately comes to an end. 2 somber lines, over 3 or four guitar strums. Oh well... Cash Rivers MUST return to save us all.
Posted by Eric Truchan at 1:43 PM