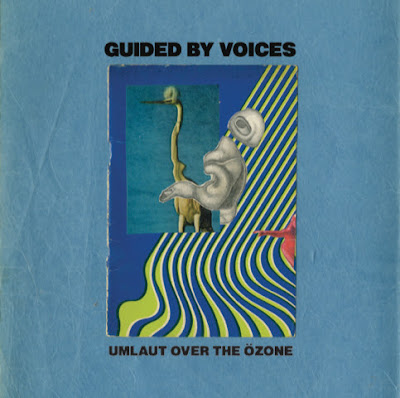 On March 29, 2019, round two of the GBV EP saga continued. 3 months removed from the first two entries in the quintet, 1901 Acid Rock and Umlaut Over the Ozone hit stores. Like the first 2, each EP was pressed on black wax and limited to 1000.

And like the first two, each song featured the current line-up firing off song snippet shots from the hip. Umlaut Over the Ozone proves to be a strong EP full of "angelic weirdness" and haphazard GBV ideas tightly packed into an enjoyable slab of wax. The only deterrent is having to flip this gem over, repeatedly.

Each of these songs were collected less than a month later on the Warp and Woof LP.

SIDE A:
Angelic Weirdness- 4 Case in point of the title defining the entire song. In fact, this could very well be Pollard flying his Ween appreciation freak flag. If this were on Ween's The Pod or GodWeenSatan: The Oneness, would we question it? With that said, this is not to be missed. Pollard's vocal delivery is somewhat off-putting at first, yet somewhat heavenly thanks to studio effect. Dropped over the acoustic backbone of the song, it's oh-so-sweet, and sinks its hooks into you slowly.

More Reduction Linda- 4 Guitar wise, brings about dizzying memories of "Field Jacket Blues" off Pollard's From a Compound Eye. Epileptic in both its guitar and tom rolls approach while allowing for momentary 2 chord pop moments. Great Pollard double vocals on the "she always knows" parts, along with Gillard guitar noodling.

Blue Jay House- 3 Starts off sounding like this could be one propulsive song! A simple guitar riff we've heard lead off countless songs in the rock universe before. You just know it's gonna slay. Eventually it sort of dribble about over 2 minutes, recalling more of a 90s The Fall feel (backed by acoustics and keyboard jabs), rather than anything resembling propulsion. Pollard's melody and delivery feels too uninspired to make this stick as anything more than a dude singing over mid-tempo repetition.

SIDE B:
Photo Range Within- 3 Blink-and-you'll-miss-it simplicity here. Pollard and company rolls lightly into whimsical country meets child-friendly simplicity here. Catchy and an almost idiotic way, anchored by Shue's lead bass, and given life by the prickly guitars of Gillard and Bare. Almost sounds like a thrift-store rendition of a passable Pavement outtake, a band that made their living on thrift store ideals.

Mumbling Amens- 3 Moody and prickly. Like a cold mid-summer's day mist rolling in off Lake Erie  into the industrial compounds of Cleveland, there's beauty here, but perhaps not apparent at first. A breath of air, or one best suited for moments of looking out at the gloom with hands planted firmly in pockets.

End It With Light- 5 Perhaps not since Do the Collapse's "An Unmarketed Product has a closer felt so immediate and catchy. Brief, pounding, profound. Top notch LP closer, one that requires  only a minute in change of your time. Like a lost gem from Alien Lanes, "End It With Light," truly does as its title implies, reminding us why GBV is number 1 in our hearts and on our score cards.