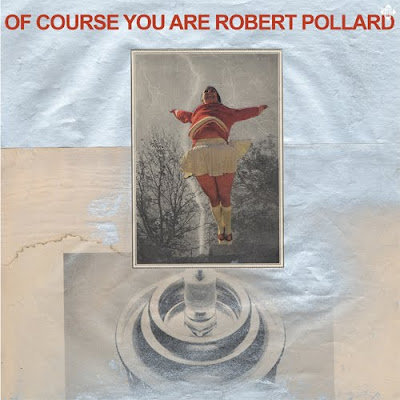 The first 2016 offering from Robert Pollard finds the man of regurgitated chord progressions and endless melody dropping 12 more nuggets into his bottomless pit of prolificity.

On Of Course You Are, his 20-something-and-whatever solo LP, Pollard finds himself diverging from his comfort zone in two major areas. For starters, this is the first solo album not released on one of Pollard's own imprints since 2007's LPs Coast to Coast Carpet of Love and Standard Gargoyle Decisions via Merge Records. Out on Fire Records (the long-standing British label responsible for unleashing much of GBV reunion catalog in UK), Pollard could have a new internationally known launching pad for a while. More importantly, we find Uncle Bob taking a sabbatical from trusty mainstay collaborator, Todd Tobias. Joining forces with recent collaborative heavyweight, Nick Mitchell of Ricked Wicky fame, the LP breaths some new life into a storied history.

Recording wise, Mitchell hurls in much of the kitchen sink in regards to the album's production. However, rather than clogging the system, the LP works fantastically. One gets the feel that Mitchell significantly aided in fleshing out Pollard's acoustic demos (found scattered throughout the Suitcase 4 box set). Conversely, Pollard sounds on top of his game vocally, perhaps rejuvenated, inspired by a change in the recording process. Whatever the case, Of Course You Are is a solid, praiseworthy record, despite its absence of a true game-changing track. Take the largely smooth 30 minute trip down the ever-winding road of the Robert Pollard solo cannon.


SIDE A:
My Daughter Yes She Knows- 4 Originally the preview track spread across the vast internet to warn the masses that BOB was BACK!... This opening track is a mid-tempo moody riff rocker, tethered to a reparative guitar line. The whole affair has a similar feel to the new school Pollard classic "I Killed a Man Who Looks Like You" off Honey Locust Honky Tonk. Plodding, but strong performances all around (even though Mitchell seems to loose a little steam tempo wise toward the end), and strangely hooky. Subtle power in this track.

Long Live Instant Pandemonium- 4 Chug a couple brews, stare hatefully into the abyss and get ready to unleash a high leg kick. A rather lifeless and redundant riff is strengthened by Mitchell's drum tempo shifts, tense bass drop-outs, and an unexpected shift in the bridge. Pollard and Mitchell really do an excellent job funneling some obtuse attitudes into a live-show worthy force of nature.

Come and Listen- 4 We shift gears here. Get out the bow and drag it across some strings. The rock is gone for the next three minutes. Behave! Nick Mitchell, a jack of all instrumental trades(as seen in his often stunning Wicked Ricky b-sides), dropping some lush string work on us, complete with subtle piano hits. Undertaking such a fragile backdrop, Pollard delivers a brilliant vocal performance over the orchestral melancholia. Walking the tightrope, Pollard stays surefooted through the whole affair. A brilliant ballad is added to the canon, so be it.

Little Pigs- 3 The poppiest track of the bunch up to this point, Nick Mitchell delivers an airy recording of mid-tempo pop; nothing to gloat over, nothing to distain. Pollard's hooks are spot on, but nothing that shakes the discography to its core. The whole affair has a kick-back-and-enjoy-the-fucking-sun-you-sad-piece-of-shit. The "keyboard" horn part allows for a rather epic outro to an otherwise decent track.

Promo Brunette- 2 A stop-start track that seems to drag its feet on the pebbly ground through the song. Pollard repeats the same lines through the duration of most of the track, twisting them into an unforgettable melody (in the most grating way possible). The end melody, along with the chanted vocals, allows for some redemption, but feels like a chore throughout.

I Can Illustrate- 4 An annoyingly catchy pattern between Nick Mitchell's upwardly mobile bass lines and Pollards vocal melodies. However, the song really works, shifting through several different parts, Pollard taking the gold on vocals. Mitchell's instrumentation substantially adds to the track; piano popping in unexpectedly. Let's not forget to mention the solid acoustic guitar backbone and infectiously cool guitar scrapes on the breaks. Oh yeah, some post-punk orchestral accents at the end too!


SIDE B:
The Hand That Holds You- 3 A moody, bumpy ride in a jalopy that can never quite seem to get out of a rut. However, there's a lingering sadness through this song, and a sly melody that seems sneak up, comparable to a hunger ravaged dog hanging out at the family dinner table. Not blowing any minds here, but equal parts dank and breezy;  a freshly cracked window in a moldy fruit cellar.

Collision Daycare- 4 Mitchell opens things up with a jangly, but distorted pop guitar line that sounds wholly appropriate in the land of Pollard. Pollard pops in with another strong vocal showing. The main hook, is hooky for sure, if not somewhat annoying in a sophomoric kind of way. However, on the tom stomping chorus, the song opens up and Pollard really let's it fly. Repeated listens have both annoyed me and inspired. Take your pick.

That's the Way You Give It To Me- 3 Sounds very similar to some late period GBV stuff during the early '00s. Super light throughout, Mitchell leaning heavily on an acoustic crutch, ambient keyboard lines inject it with a breezy quality. Pollard's melody is quite lazy, but it all works, even if it's in a cheesy kind of way.

Contemporary Man (He Is Our Age)- 3 Nick Mitchell decides that, in fact, he can be a Circus Devils' mate along with the Tobias brothers (or so it seems)! The track opens with blipping synths, pulsating keys, building into a sea of tom rolls. The first half of the song, bunch of post-rock/punk monotony of little note. Eventually, it opens into a celebratory bridge of sorts, before transforming back into a electronic mood piece that rides out on a doomy high note. A bit of a mess, but wholly inspiring.

Losing It- 4 Mitchell busts out the bag of weird tricks on this one, constructing an sparse acoustic backbone that hovers around vibrato theremin effects and psychotic ambiance. Meanwhile, Pollard sings of taking acid and running naked through the town. Feels more like a Circus Devils piece too, but it's somewhat beautiful in its haunting nature rather than relying on studio fuckery. The only true black eye of this mesmerizing song; Pollard's inclusion of the lyrics "breaking out the Rolaids." Why?

Of Course You Are- 4 An unremarkable mood setting acoustic opening gives way to a potential future sing-a-long crowd pleaser.  The song builds into a first-raising fervor, always feeling on the verge of bleak, but wholly empowering. Meanwhile, Pollard is king in both the lyric and vocal department. A real standout track closes things out with a forceful shove through the door.... Gonna give the whole goddamn thing another listen? The answer's in the title, dummy!!