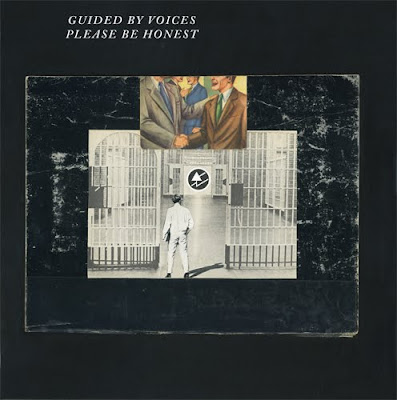 When Uncle Bob Pollard releases one of his 20 something-and-counting “SOLO” albums, it’s never actually a solo release. For years, Todd Tobias sat in as his right-hand man, recording and playing all instruments as Pollard added vocals, sometimes the occasional guitar track. Recently, he teamed up with Nick Mitchell on Of Course You Are, following the same ringleader blueprint. The truest “solo” LPs of Pollards’ everwinding career seem to have come under his recent moniker, Teenage Guitar, a “band” in which Pollard performed all instruments himself (except for a couple guest spots).

It’s with that in mind that we find ourselves at a new crossroads. The GBV moniker is once again dusted off and put back on the record store shelves. A new line-up has been assembled for recently added live shows. All systems GO! Still, there's not one member of the GBV ensemble on this one. It has been written that after Pollard recorded Please Be Honest, he saw it fit to be deemed a Guided by Voices release, an unprecidented turn of events as a one man showing. While it’s another day of celebration in the land of Guided by Voices, it’s initially hard to not view this as the possible Teenage Guitar record that got away.

See, Pollard recorded all instruments himself at Dayton’s Cyberteknics studio, something he did with Teenage Guitar’s More Lies From the Gooseberry Bush , an interesting but mostly underwhelming record. The Guided by Voices moniker has always been the holiest of grails for Pollard’s  writing compulsion, but over the past 30 years, GBV have always included other bandmates, if not significant song writing contributions from a litany of Dayton friends.

It was announced shortly before the release of this record that GBV had reunited ONCE AGAIN to for a string of live shows, this time without the likes of GBV alumni Mitch Mitchell, Greg Demos, and the almighty Tobin Sprout. Perhaps the name on the record strictly stands as a promotional tool, or simply as a reason to restart engine. Whatever the case, there’s more Pollard songs in the cosmos. If it should be labeled as Guided by Voices, then so be it, and may it carry on.

The album itself is a shambolic smattering of cuts, but one that really starts to come together after a couple trips into the record's grooves. A lo-fi feel recorded in a hi-fi setting with Phil Mahaffey, the LP is a slow moving, affecting record stuffed with ideas, most of them converging to further benefit the Pollard legacy. It's the gloomiest GBV record since 2013's English Little League, but surpasses the record in quality.

What's in a name? Who gives a shit in the end? Guided by Voices lives!

SIDE A:
My Zodiac Companion- 5 This LP kicks off with a sparse prog tune turned end-of-the-world anthem mid song; a real mini epic pillar to hold up the front end. Cold, moody verses playout with some awkward reverb affect throwing Pollard's vocals about. The chorus, although basic, is a building catch-all of bellowed hooks that are capable of shockwaves. Give it a couple spins to make it one of your top go-to Pollard moments in recent LPs.

Kid on a Ladder- 4 A conflicting track, but great nonetheless. So simple and pure in its approach, but it's territory Pollard has been down before time and time again (particularly brings to mind "Unsinkable Fats Domino" off 2012's Let's Go Eat the Factory), but doesn't make it any less enjoyable or unpalatable. The drum machine backbone track proves both irritating and wholly GBV appropriate at the same time. The hook hangs in your brain long after the needle has been lifted.

Come On Mr. Christian- 3 Fairly lifeless droning track for a cold, rain soaked day. Still, there's a ray of sun poking through the mist. More of a ballad tune cocooned in small pockets of experimentation. The layered vocal melodies help keep the song on better track. There's a lingering intrigue just below the surface waiting to burst out but never does.

The Grasshopper Eaters- 2 There's something fascinating in this song's repetitive monotony, but unfortunately it's pretty much repetitive monotony. Also, quite lifeless to boot. The acoustically jangled chorus sections give some hope, but ultimately the song falls flat. It's mostly just Pollard banging away on one guitar chord while clangs and clunks ring out in the background. Too long for anyone's good.

Glittering Parliaments- 5 Stomping rocker that builds slowly under a kaleidoscopic mesh of guitar tracks and feedback. Feels like some of the strongest "reunion" era stuff already put to tape on, say, Motivational Jumpsuit and the like. The ending, Pollard repeating the hook affirmatively, is a thing of classic GBV beauty. A slow grower, perhaps, that really sticks as a new one for the "ultimate mixtape" collection.

The Caterpillar Workforce- 3 The opening marching section of the track feels like Pollard trying his hand at nursery rhyme rock. It's both humorous, oddly catchy, and somewhat annoying. A blink-of-an-eye later, the song evolves into several other sections, most of them much more lush, and less idiotically hooky than the opening. A fractured shit-sandwich of ideas but worth the short trip.

Sad Baby Eyes- 1 Pollard hits a couple of piano keys back and forth and sings in his deeper "Uncle Bob" voice. Short and dull. Not the bottom-of-the-barrel, but little merit other than inflating his songwriting stats. For fans of Clouds on the Polar Landscape.

The Quickers Arrive- 4 Post-punk dirge that really drags the listener through a grim wasteland of the avant, unguarded and wide eyed. Extremely bass heavy, the entire song almost sounding mechanical. Pollard gives an excellent vocal showing, sounding like a sure-piped version of himself from 20 years past. The psych guitar work leading out the song is to die for.

SIDE B:
Hotel X (Big Soap)- 4 The most multi-facited song of the LP. Starts out lofty but soon morphs into a prickly post-punk plodder held down with some thrift-store quality bass tones and ominous Pollard vocal delivery. Halfway through, the tune eventually spills back into greener pastures, building into a psych crescendo as Pollard ascends throne. And for BEST measure, we close it all out with a tacked recording of a high school marching band. At times, brilliant.

I Think a Telescope- 3 A double tracked acoustic number, plucked and sung in the same style, making the whole tune somewhat grating. Halfway through, Pollard plays the track slightly off giving it a mystical, distant quality. The tracks lacks lyrically, creatively, but still a valid attempt.

Please Be Honest- 4 The titular track immediately takes one back to the "classic" era of GBV, but with the rust and dust that seems to hover over the entire LP. The lightest "pop" song of the bunch. The eerie quality, shaky delivery, and off-kilter harmonies really pushes this lazy pop tune to the top. Sweet yet grim, like black bubblegum. Also, special nod to Pollard's drumming skills. Super simplistic, but his bashing really adds to the overall patchwork atmosphere.

Nightmare Jamboree- 1 Stuck on a single guitar chord and short on ideas, the first clunker of Side B. Pollard adds some melodic guitar leads and odd noises in another unsettling affair. Unfortunately, it goes nowhere fast in a leaky boat over pirahana infested waters.

Unfinished Business- 3 Brain pounding drum machine immediately evokes a poppier, but relentless industrial feeling. Pollard strums bare chords over it and creates a melody so subtle and addicting it almost feels like he's painting a melody that's not even there. Really benefits from the less-is-more aesthetic. Far from a classic, or even overly memorable, but worthy of reexaming.

Defeatists' Lament- 2 Piano and acoustic guitar sad-sack track that really treads water at the end of this gloom filled long player. The only saving grace; Pollard backing himself up on vocals mid-way through the song, creating a to-die-for psychedelic, Circus Devils-esque moment. Still, comes up far too short.

Eye Shop Heaven- 3 Another classic line-up type Pollard melody opens this one up. The song teeters on prog/noise for a bit as Pollard delivers his lines while he bashes away in the background. Eventually, the chorus swoops in to save the day. Almost a true winner, with the ability to stick in your head for days, yet scattered about. Like a hoarder's garage sale, it's all over the place and hard to get rid of.