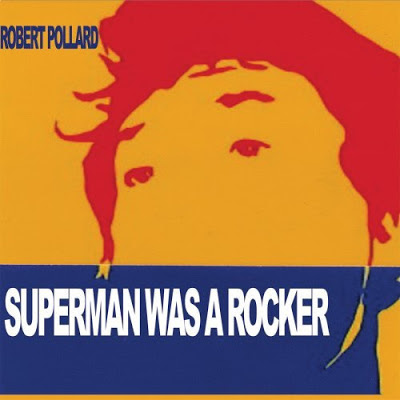 Welcome to the official, unofficial, officially NEW Pollard solo LP. Superman Was A Rocker is both inspiring and completely barf-worthy.  For this one, Pollard went back into his dusty suitcase of basement tapes and found old instrumentals that he'd made over the past 20-25 years. Who knows? Maybe they were just 10 years old? On paper, this seems like a somewhat of promising idea, and a wonderfully blank canvas on which to paint.  On the other hand, the LP is a complete lo, or NO-fi effort of instrumental wanking around, with present-day studio Pollard vocals recorded over the grab-bag.  The record, should go without saying, is an incomplete and difficult listen to get through.  FOR THE FANS ONLY! However, "Love Your Spaceman" is worth of any Pollard mix-tape waiting to be made.   Unrelated, for the history buffs, the LP contains contributions from such GBV alums as Tobin Sprout, Kevin March, Kevin Fennell, and Mitch Mitchell.  Make no mistake.... this doesn't make it good.

SIDE A:
Another Man’s Blood- 1 Lo-fi, used up basement jam with additional nonsensical Pollard vocals laid on top of it.  Plodding, moody guitar rock with a dumb snarl. Almost 4 minutes long? Disjointed. And just when you think it’s over... NO! never over.

Go Down First- 3 Lo-fi guitar strums over Casio keyboard beat. Some potential in the charm. On an album like this, it stands as a reluctant highlight. Falls apart at times, but works. Sounds like a late night drunk tape.

Back to the Farm-1  Fake radio interview at the beginning with Pollard doing an impersonation, slandering GBV? Ok, it’s humorous if you know the guy I’m sure. Then to take up track space, the instrumental version of what is later revealed to be the BEST song on the album is played.  This is still such a great riff, and time change, but why THIS had to be on the album with a radio interview gets the hammer-down of disapproval.

Substitute Hevean­- 1 Out of tune, basement tape of drum and guitar recorded sometime in a the past, probably at Pollard's house. Nothing to write home about, even though I just wrote about Pollard's home. I enjoy alcohol too, but come on. And this is over 2 minutes long? Beware the drum solo.

SIDE B:
You Drove the Snake Crazy- 2 Acoustic kitchen-tapes with handclaps. Freewheeling song where Pollard overdubs vocals trying to spruce up the original tapes' melodic flaws, but instead hurts it most of the time. I actually wouldn’t mind hearing this as is, but nope. It’s all mucked up.

Surveillance-1  Pollard sings over what sounds like “Man Called Areodynamics” (from UTBUTS) played backwards. And does a piss poor job singing over it to boot.

Fascination Attempt- 1 Flubbed radio intro-thing followed by a twittering noise.  Not a song.

Love Your Spaceman- 5  Okay. Here we have a weird turn of events. After a barf fest of unearthed turds, the instrumental section of “Back to the Farm” gets a Pollard vocal-overhaul, and in turn it sounds like a vintage GBV song. The most refreshing thing on the album, suitable for relistens, and among the coolest of the Pollard solo cannon. Thanks for writing the music, Kevin March!

Jumping- 2 Manic acoustic strums with lo-fi Pollard vocals.  Lifted from a tape somewhere, and some squealing added to lengthen the song. But the song itself sounds like an outtake from Same Place the Fly Got Smashed.

St. Leroy- 2 Jaunted, folky, acoustic picking strumming pop up. If taken as a moody, sloppy lo-fi track, it’d be one of the more intriguing ones off Suitcase.

Peacock- 2 Electric, out of tune track starts off sounding a bit Jandek-like before breaking into a drunk ramble. A couple overdubbed yelps from Pollard to add to the chaos and you got yourself a pile of crap about a peacock. But it’s kind of fun in a shitty “Deathtrot and Warlock Riding a Rooster,” way.


More Hot Dogs Please- 2  Radio-voice over again. "Classic" GBV line-up recorded this stoner paced rocker. Pollard drones some nonsense in the background. Next time, keep most of these songs locked-up. (Next time will hopefully be Suitcase 4, and Pollard fans and I can't fucking wait for more shit like this to see the light of day.... all the time).
Posted by Eric Truchan at 10:02 AM