Robert Pollard Is Off To Business (2008)

Robert Pollard Is Off To Business
(2008, Guided by Voices Inc.) 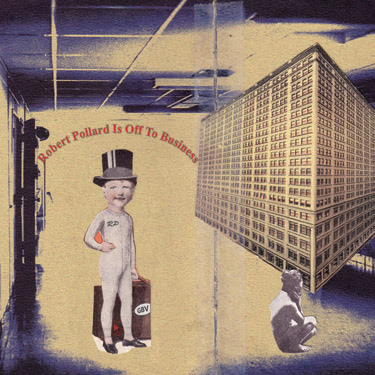 Pollard returns with his second proper solo LP of 2008. Unlike the ultra lo-fi, found recordings record Superman Was A Rocker, Robert Pollard Is Off To Business is a proper studio LP recorded with long-time collaborator Todd Tobias.  RPIOTB is a rather strong outing, finding Pollard in full on song-structure mode.  It's one of his shortest LPs, at 10 songs, but most tracks hit 3 minutes plus (the single "Weatherman And Skin Goddess" breaks the 5 minute mark!), a somewhat of a taxing duty given Pollard's penchant for short gems. The LP was also the first full-length released on Pollard's new label imprint, Guided by Voices Inc. following the label's first release, Pollard's Weatherman And Skin Goddess 12'' EP.

SIDE A:
The Original Heart- 3 Hurky-jerky rhythm sounded like some kind of jittery ‘80s rock.  Rough to listen to with it’s jilted pattern, and somewhat piece together guitar chords. Subtly catchy, and sappily uplifting.

The Blondes- 3 Slow tempoed, airy pop song with a killer hook in the last 40 seconds of the song.  Fey synths and instrumentation keep this light. Never really over the top in any spots or tack into the brain moments though.

1 Years Old- 4 Keeping it short and peppy is pretty effective.  Song is an upbeat sunny one with little surprises.

Gratification to Concrete- 4 Sounds like something off of Half-Smiles of the Decomposed. Pretty solid Pollard solo song, but could definitely do without that weird modulated sound effect playing the riff.

No One But I- 2 Downtrodden, carelessly thrown together and overly long. Rough patch that’s rather pointless.

SIDE B:
Weatherman and Skin Goddess- 4  Talk about a long one.  At over 5 minutes, this is certainly an ambitious piece to release as the single, but it also takes away from the song.  While mildly hooky, breezy without being lame, this could’ve used a fat trimming. Mainly the proggy bridges and such,  that add a good extra 1:30 to the song.

To the Path!- 3 Mini-epic song.  Anthemic and pounding, but unfortunately the first half of the song suffers from a go nowhere feel.  The second and third parts of the song are much catchier and hold the real interest.

Western Centipede- 4 Another anthem, this one a little more streamlined. Sounds like a big stage rocker, that’s fairly hooky and well sung.

Wealth and Hell-Being- 3  Slow, minor chord chugger. Epic, slow, and cold closer.  “As we go up we go down?” lyrics though.  Sprout, call your lawyer.