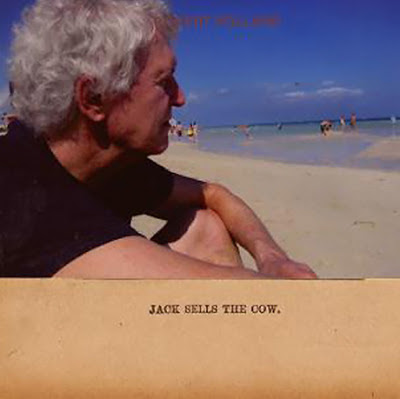 Pollard's 2nd LP of 2012, Jack Sells The Cow, is a shorter affair (12 songs), than a usual Pollard outing.  Unlike most Pollard LPs, Jack Sells The Cow proves to be one of his strongest, most focused solo efforts in years. Songs tightly straddle the classic 2 to 3 and a half minutes, and feel like they've been given the real pop treatment, track after track, for the first time in years. Pollards' LPs always have a tendency to way in on the proggier side of things, dashed with strange filler, and occasional dead-end ideas.  Jack Sells The Cow proves a solid-stream lined product.

SIDE A:
Heaven Is A Gated Community- 4  Total downer, dower-chord progression laced opener of a track. A fairly solid, prog-touched, stomping rock song. Plenty of stops and starts on the verses and choruses. The bridge is downright '60s garage psych.

Take In- 3  Compared to the opener, this is a fucking rainbow arching through clear blue sky. Airy pop, recalling one of the breezier tracks off Earthquake Glue.  Lacks any strong vocal hook, the song is carried more by the melodic bass line, and popping major chords.

Who's Running My Ranch?- 4  The verses sound like a pretty rad opening to a '60s spy themed show, with its propulsive walking bass line, and dead steady drums. Choruses are open and up-beat, somewhat unexpectedly. Pollard's outer-space vocals are a bit much, but can be lived with over time.

Up For All That- 3 Like "Take In," this one runs the track around early '00s GBV material. However, unlike the 2nd track on this slab of wax, this song features a less potent vocal delivery. Compared to some solo stuff, this is none too offensive. Plenty of pop, but just a tad flat.

Pontius Pilot Heart- 5 Straight-up, clean guitar jangle pop in the verse. Choruses take a short detour to the prog-side of things but comes right back into its bouncy, sweet pop core.

Big Groceries- 4 Verse chord progression sounds like late '90s GBV, perhaps something off Do The Collapse. Slightly Doug Gillard-tinged, basically, without Gillard's participation. Another solid, short tune. Pop-rock, but lacking one big hook to take it over the top. Strong though!

SIDE B:
Fighting The Smoke-4  Fuzzy, buzzing guitar; a steady, attitude soaked track.  No hoops were jumped through in the process, but this kick-off to Side B harkens back, again, to periods of GBV, from its Mag Earwhig! and later steady-rockers, to its psych-pop bridge of Alien Lanes days.

The Rank Of A Nurse- 3  On Pollard solo LP with more filler, this one would be a highlight.  However,  The full-band kick-in detracts from the sensitive and melancholy pop-balladry that opens the track.  This would have worked beautifully as a pop snippet track.

Tight But Normal Squeeze- 2  Herky-jerky hard-rocker offers little but Pollard delivering a solid vocal performance. However, the melody consists of Pollard singing along to all the uneven stops and starts of the song.  Perhaps the dullest track of the record, which should speaks volumes about Jack Sells the Cow.

Red Rubber Army- 5  Beautifully quiet version of what feels like a rehashed Pollard melody that's been dished out countless times in this extensive catalog. But who cares. It's great!  Red Rubber Army does not rock, prog, but pops. And quite hushed at that.

The March Of Merrillville- 2  Sad, dragging song that feels fairly out of place on the LP.  The most "filler" of all the tracks.  Even Pollard's vocals feel out of tune on this one.  Track almost feels unfinished production wise. Oh well.

Winter Comes To Those Who Pray- 3  Mid-tempo, depressed track with repetitious lead guitar line that gives it a bit of a slowly maddening feeling. Song builds up slowly before Pollard ups the ante to the finish. Not the strongest closer, but song gets better with repeated listens.
Posted by Eric Truchan at 10:08 AM