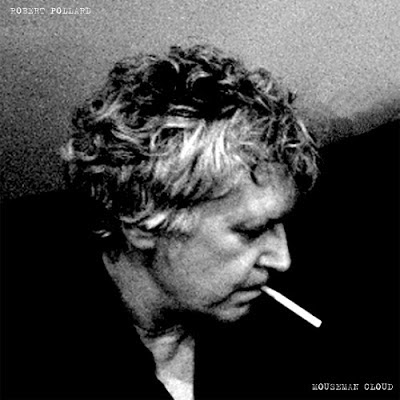 The first of two Pollard solo LPs in 2012, Mouseman Cloud is another quantity loaded solo-record from Uncle Bob. Following the laid-back, poem-first-song-later experiment of Lord Of The Birdcage, Pollard's follow-up showcases a wide array styles. It's an everything-but-the-kitchen-sink slab of tracks kind of outing.  Like it's cover art, the songs on the LP are rather drab, and middle-of-the-road (unfortunately, a few clogged-toilet tracks appear).  Mouseman Cloud, however, is not without its bright and potent efforts. This is the middling shoulder-shrug LP before a trio of solid LPs to follow.

SIDE A:
Obvious #1- 3 Fairly decent, breezy soft-rock opener with thudding tom rolls, and some goddamn tambourine shakes. Pollards "It's too obvious, it's fucking obvious..." ranting hook is a bit grating, and gratuitous.

Picnic Drums- 3 Tom heavy, surreal nightmare pop song that spills into bouncing pop ending.  Proggy, simplistic guitar picking trudges along for a little TOO long, until it gets to the killer, repetitive pop outro.  THERE'S THAT TAMBOURINE AGAIN!

Mouseman Cloud- 2  Slather on some more reverb on these surrealist lyrics why don't ya?  Lyrics about oyster dip or something, and of course the Mouseman Cloud?  Doesn't really go anywhere.

Lizard Ladder- 2  Uh-oh, someone let a Circus Devils track loose on this one. Dark, gloomy as hell.  Reeks of smoldering ashes, and who wants to smell that?

Bats Flew Up- 3  Mid-tempo guitar chug that's a bit reminiscent of something off Earthquake Glue.  Pollard almost flies off the handle with some silly harmony or another but somehow remains relatively grounded.

Mother's Milk and Magnets- 1  Oh boy.  This one's a sleeper.  Starts off with some promise.  Gloomy pop song that begins to pick up.  Then... it drops off into guitar thudding part where Pollard just repeats the title for about 10 years.

SIDE B:
Continue to Break-  2  Slightly amplified guitar strumming with Pollard deadpanning a melody opens the song with intriguing promise.  Then the song shifts into Pollard repeating "Grand father blues continues to shoot up the 6 o'clock news ....blah blah blah" for about 10 years. A repeated lyrics theme seems to have taken a dump right in the middle of this LP.

Smacks of Euphoria-  2 Pollard talks his surreal poetry while, in the distance, someone beats the drums and some instruments pop in and out.  Who cares?

Science Magazine- 4  Steady, oh-so simple pop jangle chorus.  The lead guitar line boarders on cheesy but it's some cheese I can get down with.  Spring fresh Pollard tune. Solid.

No Tools- 3 Lone guitar breaks into controlled mid-tempo rock chug. Not all that bad, but not all that memorable either.  Pretty general solo Pollard song fodder. Cool semi-psychotic guitar swirl riff though!

Aspirin Moon- 3 Harmless, standard pop song with fairly weak hook, and bogus Tobias production with stupid guitar lead over it, and cruddy drum fills. This one could've been stronger with more, or maybe a less effort. Still, the track at its core ain't too shabby. Better with repeated listens.

Zen Mother Hen- 4 Acoustic chug over simple, rather catchy Pollard nursery rhyme like vocal pattern, and lazy vocal delivery. Another one almost too lame for its own good, but I can live with it.

Chief Meteorologist- 3 Droopy, sleepy depressing as shit closer finishes this collection out. Nothing really to hang your hat on here, but pretty cool in its moodiness. If there's one song on here that matches up with the grainy black and white LP cover, it's this one. Cool repetitive ending!