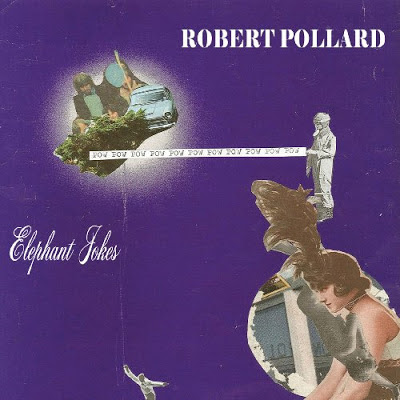 Following the drab, and rather aimless The Crawling Distance, Pollard returned with his second solo outing of 2009. Elephant Jokes proves to be a much stronger follow-up due to an unearthed trove of hooks and flat-out killer songs. Upping the ante, Pollard returns to glory-day GBV form, in terms of packing this thing full of fucking songs How many songs? 22! Twenty-two! 22? Yes, 22. Thant's 2 more songs that the previous two solo LPs combined.  The unfortunate reality of Elephant Jokes, however, rears its ugly head examining the lopsided nature of the record. A highly digestible side-A eventually gives way to a rather dank, and at times, idiotic side-B that can cause open palm to smack hard against forehead (i.e. "Hippsville  (Where the Frisbees Fly Forever)").  Still a solid outing on the Pollard home front.


Side A:
Things Have Changed (Down in Mexico City)- 5 Excellent opening track, akin to heavy late '90s/early '00s GBV. Great dynamics. One of the most promising opening tracks of the solo Pollard cannon. And all at under 2 minutes.

Johnny Optimist- 5 What a two-fisted opening to the record . Where as “THCDIMC” was a moody heavy hitter, “Johnny Optimist” is a bouncy, pop chugger. A radio-ready track with a riff so simple and effective it's maddening.

When a Man Walks Away- 5 Verses fall on the heavier side of things, with a breezier, jangly chorus. Compact and excellent. Sounding a bit like the good old days. No proggy-trickery, or convoluted instrumental sections.

Parts of Your World- 4 Acoustic song with a sense of urgency in the verses, spills into weird unsettling chorus build-up. Pollard is knockin' em up and knockin' 'em dead thus far.

Symbols and  Heads- 4 Intro sounds reminiscent of material off of Mag Earwhig/ Under the Bushes… to me. Mid-tempo, solid rock track. The “Oh yea, Oh yea” chorus is a the only weak spot.

I Felt Revolved- 3 Light sounding tune, guitar and vocals mostly, with some awkward Pollard melodies creeping up. A little thick on the British accent, Bobby. Bit of an afterthought track, but not bad.

Stiff Me- 4 Crunchy, simple, and ultimately catchy. The stop start choruses aren’t much, but the simple, repetitive stomp of this song is infectious enough for the win.

Accident Hero- 3 Starts like a jilted “Jessie’s Girl.” The chorus sung with a drunken grandeur, and the song waivers at points. Pollard sounds a little pukey on parts, making it less effective than it could be.

Tattered Lily- 2 After the length of The Crawling Distance, this one is the epic of the LP at 3:35. Intro sounds similar to something off early '00s prog-GBV. Unfortunately, the track is longer than it needs to be, after a slew of stream of conscious tracks, making it a bit of a chore.

Side B:
Hippsville (Where the Frisbees Fly Forever)- 1  WHAT?  “Don’t you just like college?” sung at the weirdest, melodic upward inflection of all time.  UGGHHHH.  This is where the editors are needed.

Pigeon Tripping- 2 First evidence of Circus Devilery slipping into this solo album. Moody, noisy-funk with duel shouted vocals?  Intriguing, but not much else.

Blown Out Man- 2 Moody, downtrodden tune. Not much in the way of hooks. Primarily a stuck in the muck rock piece with little extras. Does include a few out-of-tune vocal spots.

Desiring- 3 Pollard acoustic ballad with some unfortunate easy-listening synth strings in the background. The acoustic dynamic build-up at the end feels less craptastic, and ultimately, this ballad is pretty fucking solid at its core.

(All You Need) To Know- 2 Slow and steady wins the race with a simple, whistleable riff holding the verses together.  Unfortunately, the upfront, baritone Pollard vocals are a bad choice.  Would much rather hear him cut loose on this track. Also, what should have been a 2 and a half minute song, adds another unnecessary minute.

Architectural Nightmare Man- 3 After a killer opening and a sputter to the end, getting the closer right was a crucial move for “Elephant Jokes.” Well, it’s sort of there.  The intro to this song is acoustic strums in a skipping pattern which is cool in a “Pluto the Skate” type way. But then it spills into trudging bullshit territory that nearly sinks the good graces.